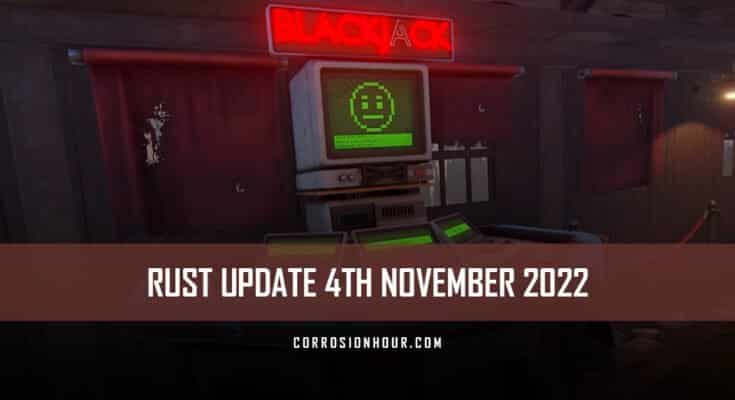 Happy forced wipe to all! We hope that this month’s update has been an exciting one, full of mystery, intrigue, and for some–Robo-dealers?

But first, this year’s Charitable Rust event is coming up in just about two weeks now, so be sure to save the date for November 19th – 20th. This year’s event benefits World Central Kitchen–an organization dedicated to providing meals for people during times of crisis. Visit the Charitable Rust website to learn more!

The Lucky Caboose and Blackjack

Blackjack made its way into RUST this week as the newest mini-game to offer a way to alleviate all that scrap you’ve been hanging on to. Only this time, it may be a bit more difficult to indulge in, as the game is only found in the new Lucky Caboose Casino, which may be found randomly spawning on the sidings of appropriately-sized maps. To top it off, the caboose is just a train car like any other, so you won’t have any kind of safe zone benefits to protect you and your investments.

Should you choose to accept these terms, you can board the casino and find a collection of your favorite casino games and the new blackjack table. If you’re looking for a primer on the rules of Blackjack, we’ve got you covered there. Otherwise, good luck, have fun, and maybe bring a friend to watch your back for you.

The elusive new RUST weapon, Prototype 17, made it to release, as indicated by the update’s title. This weapon is found in a handful of high-end crates, including Heli and Bradley, and cannot be researched or crafted. For more information on the Prototype 17 pistol and the Burst Module, check out our item pages.

Greetings, survivors and, indeed, friends. Shadowfrax here, still alive, just about, and how are you? I guess you’re foaming at the mouth for more Rust news by now, so here it is.

And this month is that of November, sees, first of all, the addition of something that’s been sorely needed ever since Legacy and without which the game’s been quite unplayable. I am, of course, talking about the eagerly awaited Caboose.

Did I talk that up enough? Was that good enough? Yeah yeah, I mean, I’m sure, not sure people are really okay.

This wacky Warehouse on Wheels is another type of wagon that will spawn in sidings, although it is fairly difficult to spot. Yeah, that’s better.

Inside you’ll find a poker table for four, a couple of slot machines, and the latest sink for your huge wads of excess crap. Jack Black, oh, I mean Blackjack, where up to three players can stand still next to an open doorway outside of a safe Zone.

Yes, this is not a safe Zone despite appearances, so it’s probably best if you’re moving as fast as possible when engaging in this particular activity.

If you don’t know how to play it, well, I’m sure there’s somewhere you could look up the rules. And just so you know as well, the Caboose has 1200 health, so just over a couple of rockets should do the trick.

A new weapon made it into the game this month first one in quite a while. The Prototype 17 can be crafted by dragging and dropping a spray can onto a water pistol. Well, no, that was a lie. You can only find this in Bradley and heli crates.

It can’t be researched, but it can be recycled to get, among other things, a burst module which can then be attached to a number of other weapons to fire three rounds at a time. The Prototype also has glow-in-the-dark bits on it for nighttime Shenanigans.

You’ll probably notice some nice updates to fire effects as of this patch, and this effect is pretty much everywhere you see a flame. And a new technique called HLOD, which stands for hierarchical level of detail, was applied this month after quite a while in development.

And in a nutshell, what it does is turn monuments at their most distant detail level into a single mesh so that it looks as you’d expect without the performance impact.

In fact, there was a very slight improvement in performance, but the main thing was to get things looking good visually, and you can read a bit more about this on the dev blog.

In Works in progress to those to whom this may concern, there’s a plan afoot to finally switch the default networking layer of Rust servers from the old Raknet to steam networking either in late November or early December, and the heads Up’s being given out to server owners now to prepare their bad selves for this.

This has, of course, been subject to change for a while, having first been mentioned back in 2020, and it’s been an option for server owners since then too. For more details, please see the dev blog or pause and read here.

There are, of course, a lot of other things we know are coming, but for which we must exercise patience, such as pets, the Nexus system and Ferry Terminal, industrial crafting, a new nuclear missile silo monument, hand cars for the rail system and even remote-controlled drones, which have been mentioned recently.

The team is being tight-lipped about these at the moment, but I will, of course, bring you updates and visuals on these when they become available.

And lastly, of course, charitable rust is coming up later this month, and it’s now been confirmed that this will include some exclusive twitch drops for two days starting November 19th and some generic drops for the whole week. What a time to be surviving.

Please let me know how you feel about this month’s patch in the comments below. I’d appreciate you leaving a like and subscribing to the channel. And if you look down below, you’ll find links to me in other places such as twitch Twitter Facebook Discord my steam group.

And you can, of course, support me in various ways, such as through Patreon via YouTube memberships or my merch store. All the links are below. I shall catch you all very soon, but in the meantime, keep calm and stay Rusty. Cheerio.