In this RUST Update, Shadowfrax provides us with a roundup of the new mixing table and the buffalicious teas that you will soon be able to craft with it. To make all of this possible, 6 new berry bush ground spawns have been introduced for you to collect and pocket. When mixing these 6 berry types in a variety of combinations, you will be able to create different teas that provide a variety of different buffs and stat modifications.

Better yet, the strength of the resulting buffs can be increased by upgrading the teas to advanced and pure tiers. At the time of this update, players are able to have multiple active effects at once, but this all subject to change by the forced wipe.

Greetings survivors and friends, Shadowfrax here with your weekly Rust tipple, and what a time to be alive it is, because with only a few days to go until all servers are held down and forceably wiped, Rust has received – on staging branch at least – the gift of TEA.

And so we now have a new deployable item, the mixing table. Something that has been floating around mysteriously in the commits for many weeks and has been the subject of much chin-scratching.

But first, please spank the subscribe button and give the bell a hearty squeeze for me won’t you? Also, check you’re still subscribed as YouTube has been up to its old tricks again recently.

Anyway, the table costs 200 frags and 100 stones, has 500 health, costs 500 scrap to research, or can be bought from the bandits for 175, and requires a level 1 workbench to craft. But let’s talk about TEA, because as an Englishman I am more than happy to. And you’d be an idiot to throw this stuff in the harbor because it grants you buffs! But more on that in a second. The teas you make with this thing require berries rather than leaves, and so to go along with this, we’ve been graced with six new berry bushes which you’ll find growing in the wild but which can also be grown in your own feces, I mean bases.

There’s Red, blue, yellow, green, black and white and you simply swipe them like any other collectible which will give you both berries and seed, because of course you’ve got so much empty space in your inventory and totally don’t need a separate berry pouch or anything. You can just nom them if you like which will give you 5 food and 2 water per berry. But the real magic happens when you insert them into the bench. You’ll notice that it has 5 inventory slots, and to make a tea with it you have to fill these up with specific berry combinations. If you enter an invalid combo then it just won’t do anything, but the berries won’t be consumed.

There are 7 combos in total at the moment, each one makes a tea which grants a specific buff for 5 minutes a pop, you can make 20 at a time (because that’s the berry stack limit) and they are as follows. Red, red, red, yellow, yellow makes max health tea, which increases your max health, surprise. Red in every slot makes healing tea and this restores your health over time. Yellow, blue, yellow, blue, yellow (blue no yellow, aaaaah) makes ore tea which increases the amount of ore yield when mining. Red, blue, red, blue, red makes wood tea allowing you to get more wood than normal.. secret recipe for Viagra there I think.

Now each of these teas grants a certain strength of buff, which is all SUBJECT TO CHANGE of course, like everything here, and I’ll put the current details in the description. However, there’s more.. because if you were to take 5 of a certain type of tea, say scrap tea, and combine these in the bench, you’ll refine them into the next tier up on the tea scale.

So, if normal scrap tea gives you a +10% yield, then the next tier up, ‘advanced’, will give you +30%. Then you can repeat the process with advanced teas to produce a pure tea which in this case would up your scrap yield to +50%. I mean, usually if I want stronger tea I just leave the bag in for longer but hey ho. Just in case there’s any confusion, there were initially 5 tiers of tea strength, and there may still be on staging as I write this, but this is being reduced to 3.

Some things to note at this juncture.–you can have multiple buffs active at once, and if you look just here on your inventory screen you can see which ones they are.. But before you ask, no you can’t stack individual buffs by drinking multiple cups of the same brew.. All that will happen is that that particular buff’s timer will be reset. And you may get diarrhea.

But not even this is all.. because the mixing bench has yet another use. Let’s see if you can work out what this little combination would make, hmm? That’s right, as long as you have the blueprint for it of course, right here is another way to make explosives. Or, I guess you could say GUNPOWDER TEA? YEEEEEEAAAAAHHHHHH You still need a level 3 workbench to turn them into C4 of course, but this does give an extra option with a different set of ingredients and makes compost bins much more attractive.

I can’t emphasize this enough, but I will say it again, all of this is SUBJECT TO CHANGE. And we still have a week to go, so there.

Next, a long awaited boost to our sanity has finally been implemented on staging because now conditional roof corners are here. What this means is instead of weird overlaps, roofs should form nice neat angles on both exterior and interior joins. There are two roof pieces now, one for square foundations and a new one for triangles, so make sure you use the correct piece, and please note that at the moment not all shapes are supported. For instance, you can’t do this one, or a 1×1 square. Oh, and roofs will cost the same as floors in both build and upkeep now.

In other news, bone arrows are having the thickness of their hitbox reduced by 30%. Although it’s still double the size of normal arrows. The horseshoe cave has received a significant nerf in that you can no longer build in the center building pocket. Boohoo.

Cars received a number of tweaks this week, including better hill climbing capabilities with 25% more low speed power and 7% more grip on all surfaces. There were a few other fixes including one for getting dismounted from a minicopter whilst flying low over the Airwolf vendor on Hapis. Supply drops flying away after getting hit with projectiles, and modular cars and mini copters becoming unusable after loading from a save if it was made during engine start up.

Oh yes and picture frame glass isn’t quite as dark and dingy. In works in progress, the boat shop monument is receiving a lot of love, with a few new props being created for that nautical feel, such as anchors, fishing nets, oars and barrels, yaarrr! And last week I mentioned new midi mapping convars to allow us to control cinematic effects through either hardware or software devices. And as promised there’s now a full write up on how to accomplish this over on the Rust wiki, and I’ll put the link to it in the description for you.

Please leave a like if you enjoyed this vid, and tell me your thoughts good or bad in the comments. Please join me on Twitch to see me stream things, and Twitter, Facebook, Discord and my Steeeeam group to stay up to date with my content. I’d like to thank my smashing patrons for supporting me and helping me make these vids for you and you can join their numbers over on Patreon. Link below. I shall catch you all soon, but in the meantime, keep calm and stay Rusty. Cheerio.

Squishface is the co-founder and owner of Corrosion Hour; a RUST community and website dedicated to helping server owners with the administration and navigation of the ever-changing landscape of RUST. As a CS tech professional with over a decade in the field and a deep love of gaming, she spends much of her time in code researching and developing ways to bring meaningful content to players and readers. 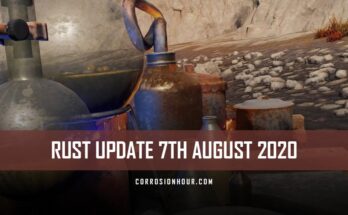