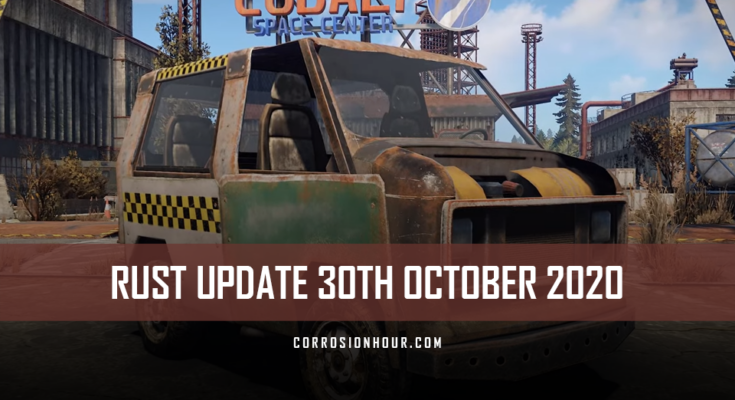 In this week’s RUST-at-a-glance, we are introduced to the new Taxi module for the modular cars system. This module solves some of the issues with player-provided transportation; mostly involving getting shot or being cheated on payment. The taxi module provides a nice barrier of bullet-proof glass between the passenger and the driver, as well as a drop-box for the seated passenger to provide payment for their ride. How fancy our island life is becoming!

In other news, the Stable Monuments have landed on staging this week, which means that they should be making their release branch debut in next week’s monthly update. The stables will spawn in temperate areas and will be safe zones like most vendor monuments. All supplies and accessories for horses can be purchased at the vendor as well as the horses themselves, but breeds and availability are always subject to change before the update.

Greetings survivors and friends, Shadowfrax here with your weekly Rust pick me up, and with less than a week to go until the next forced wipe, here’s a roundup of what you’ll definitely be able to expect and what else is in the works.

But first, if you value keeping up to date and generally entertained, then please sub to the channel, ring the notification bell of mystery, and leave a like if you’d be so kind. Also, follow me on Twitch, where I stream things, ta!

Right, so this week, we’ve been hit with a new taxi module for cars, in case you fancied being a ‘noober’ driver. One of these will cost you 125 wood, 175 frags, and 5 HQ to craft at a level 2 workbench, and they’re 125 scrap to research.

There’s no meter, so you’ll have to sort out fares and tips yourself, preferably up front, and that’s what the dropbox is for. But for any transactional disagreements, there’s also a handy kick button which can be slapped at the driver’s discretion. An ejector seat would have been more fun, I think, but hey ho.

There were also a lot of changes to car costs this week on staging, probably to incentivize you to actually use them. Modules should now be cheaper to craft, tier 3 engine components are researchable and craftable, plus no longer require high qual, and components are generally cheaper to buy.

Car lifts are also less expensive and only use 5 power, and there’s now a new dedicated loot container for car parts, which should be very obvious when you see it. Taxi modules do, of course, neatly slot into the game with the new phones I showed you recently, and these can currently be crafted for 50 wood, 100 frags, and 1 tech trash at a level 1 workbench and researched for 75 scrap.

Further to previous details, they now have a passthrough too, which is activated when the phone rings or is in an active call, which does give them extra usefulness. You’ll also now find public phones dotted around the map next to roads and at selected monuments.

Just in case you have the urge to stand perfectly still in the open somewhere. Another couple of big new things on staging this week and, therefore, expected on the release branch next week are stables. Two of these should spawn on a default sized map. You’ll only find them in tier 0 and tier 1 temperate areas, and they are both safe zones.

And these should become your one-stop-shop for all your horsey needs. You should know the drill by now; just think boat shops but with hooves. There are two different types, the large barn and the ranch, but really they are pretty much the same.

Purchasable equestrian goods have all moved here now, such as roadsign horse armor and high-quality shoes, and you can also buy a saddle which will allow you to pick any one of the potentially 6 random horses housed in the stables.

Not a single whiff or mention of pies, though, which is frankly very disappointing.

Now, I did speculate that these could mean that horses would start hiding completely behind a scrap wall, but it seems that is not the case. The TEAM has decided to instead just reduce horse spawns in the wild, so you’ll still find the odd one, and not only but also, a small amount of boats will start to spawn procedurally once again. But of course, this is all SUBJECT TO CHANGE.

Talking of which, some other changes of note. Lit torches will now burn slower, so they should last all the way through the cold, dark, impenetrable night.

Roadsigns can now be destroyed by driving into them with enough oomph and will still yield the usual components; skull spikes with candles now properly work at night. Huzzah.

And for the southpaws amongst you who just yearn to break the sinister shackles of the right-handed world, a special convar: graphics.vm_horizontal_flip, which when set to 1 will put things in your left hand instead. At least from your viewpoint. Happy now??

In works in progress, the techtree system is still being tinkered with in a back room somewhere by Helk, so not much more to say about that yet.

The same goes for the Hapis rescue attempt, really. And HDRP backporting is doing well with lots of art assets being moved over on a separate branch, that hopefully, I’ll be able to show you soon.

Ah, here’s my ride. Let me know what you thought of this week’s new stuff down below; leave me a like if you appreciated the vid and sub to me for more of the same. Come and see me stream on Twitch, stay up to date with my content on Twitter, Facebook, Discord, and my Steeeam group, and consider becoming a patron like these amazing fellows on the right. I shall catch you all soon, but in the meantime, keep calm and stay Rusty.