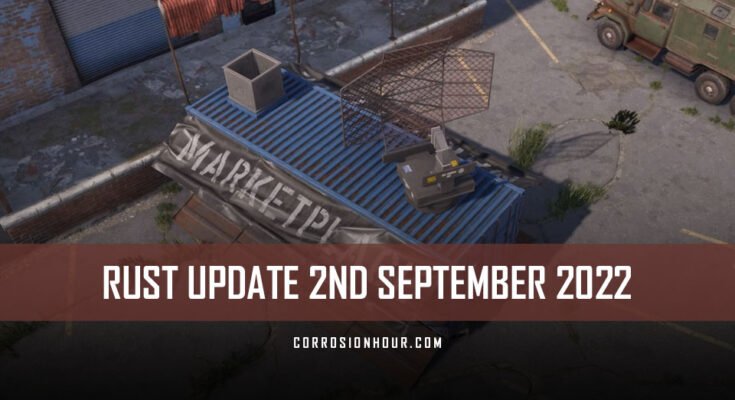 Happy update to all! We hope that everyone had a smooth and successful forced wipe yesterday. The Hardcore Gamemode Update brought in the new Hardcore game mode, the Furnace UI update, updates for the drone Marketplace and reclaim models, extended storage capacities, and a slew of bug fixes and enhancements.

For more information on changes and features in the update, please see our update coverage for the Hardcore Gamemode Update. If you’d like more detailed information about the Hardcore game mode, please check out our Hardcore mode guide.

Other RUST news and updates

The Caboose project seems to be evolving into some sort of shady operation on wheels with the introduction of blackjack in the commits. Combine this mini-game with the slot machines and poker mini-game, and you’ve got a sort of mobile casino that I’m sure every train collector will want in their set.

Greetings, survivors and friends, Shadowfrax here once again to brighten your Friday with yet another update on the most eagerly awaited patch to Rust since that one with the stuff. Look, you love it; really, otherwise, you wouldn’t keep coming back.

This is going to be a roundup, a lot of it I’ve already told you, kind of, but there is some new stuff, I promise, and some ch-ch-ch-changes. But first, if there’s something you like about this vid, no matter how small, please consider flicking the like and sub buttons at some point.

So hardcore mode, here it is. And some official servers are running it, which I believe have been quite popular so far. Early days, of course, but it’s good to see a stripped-back version at least available because, let’s face it, you’ve had it far too easy for far too long, and frankly, you were all getting a bit soft. Embarrassing.

Anyway, as you should know by now, this OPTIONAL game mode which can be activated by server owners either in the config or on the fly, removes all sorts of mollycoddling fluff from the game that has built up over the last few years, such as global chat, the compass, the TEAM system, safe zones, Rust+ and most importantly the map in any form.. a stunning and brave move which by its absence actually adds to the game. Underwater labs are certainly fun to find.

As well as this, there is a five sleeping bag limit, and blueprints wipe monthly. There is still a crosshair, though. the reasoning being that blue tack is still relatively cheap for now.

The new furnace UI is here now. Gone are the days of all-purpose slots and maximizing your efficiency through perfectly calibrated stackage. Now you just pop everything in and press go. A bit like going from a manual to an automatic. I can certainly understand the disdain for control being taken away from you and the removal of the satisfaction of being able to say, “this baby is working at maximum efficiency, and it’s all because of me, the way I stacked it.. I did this.. I’m great.. they call me little Johnny Stacker..”

And, of course, you can no longer smelt or cook more than one thing at a time in the same furnace. Although, it is possible now to queue ores/meats. But as to any arguments against these changes from the angle of speed – and I must admit here I haven’t had the time to make an in-depth comparison and get exact figures yet. Maybe you can add to this in the comments – from what I’m told, smelting speed is as fast or actually faster than it was before. Capacity is also the same. Apart from only being able to store food in BBQs etc

But what I’d really like to know, from that tiny, tiny, tiiiiny minority of you who were complaining about all this over the last few weeks, have you actually tried them yet? If so, how do you feel about the change now?

Talking of capacity, an unexpected buff worked its way in with this month’s patch. You see, Rust used to be simple, the most you ever needed really was a rock and a dream, and perhaps a bit of “vood,” and the dream didn’t take up much inventory space, really. But over the years, just like in real life, we’ve accumulated more and more tat, thanks to all these regular updates.

Now we’ve got components, electrical items, fish, berries, tea, fourteen kinds of gloves, scuba gear, the entire Vauxhall car parts catalog inventory, plants, seeds, potatoes, horseshoes, spiders, and still no pies. But my point is, where do you keep it all? What’s the solution? Get rid of stuff? Don’t be silly! This is a game for loot goblins now. The solution is, of course, more slots in containers.

And so now, bang! Small wooden boxes have 18 slots, and large ones have 48! A surprise, to be sure, but a welcome one.

In other changes, the coaling tower was switched up a bit; it now has a tradesman’s entrance at the top where the suspended bridge is. You still need a keycard to get in this way. It’s just a little bit sneakier and good for making a sharp exit if you need to.

There are new reclaim and drone marketplace models, as shown previously because the ones we’ve been used to were just placeholders and SUBJECT TO CHANGE.

In quality of life, the UI when harvesting will show a single running total rather than lots of individual pickups, which helps with performance; Ziplines should no longer get blocked by trees.

And there’s a new option in the experimental settings to enable Optimized Loading for faster loading on SSDs, so give it a whirl if that applies to you.

There were a number of fixes, too, I can’t remember which ones I’ve mentioned already, but you can read about all of them on the devblog or pause here.

There was a long-standing bug squashed, which saw players take fall damage after respawning. One that stopped small signs from being deployed on boxes. The flickering water issue with TSAA has been resolved huzzah, and Hapis received a big round of fixes this month to sort out problems with holes in the map and killer road surfaces along with better road tunnels.

Over to works in progress now, and I don’t have anything yet that I can show you on pets, lockers, or the new nexus ferry terminal, as I’ve mentioned in previous vids. But an image did sneak into my possession today of the new Caboose train wagon being worked on. Which, from the commits, seems to be developing into quite a seedy joint if you ask me.

There’s a definite theme going on here with mentions of a poker table, slot machines, and blackjack? Which from the neon sign that says “blackjack” appears to be what this new terminal at the back is about. What a time to be alive!

It seems that this could well be a type of wagon that spawns just like the others for players to pick up and trundle around with, and hopefully, it won’t be long till we can “Shuffle” on board one. Let me know what you think. Is this an ace move, or are you having a hard time dealing with the idea?

Right, that’s me; I’m off! I hope you’re now all up to date. If not well, I’m sorry I tried. Leave a like, sub to me, Follow me on Twitch for streams, Twitter, Friendface, Discord, and my Steeeeam group for updates, and support me if you like through Patreon, Youtube memberships, or my merch store; links are all below.