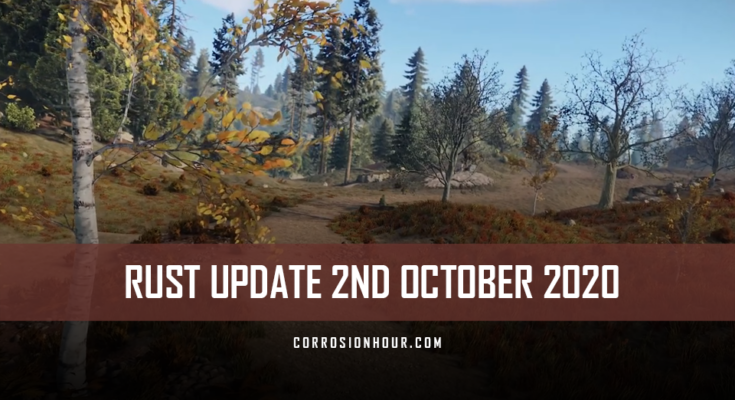 Happy forced wipe to all! In this RUST Update, Shadowfrax brings us a roundup of the changes and additions that made the cut for this month’s game update. The aptly-named Elevator Update has brought eager-builders a new tool to bless base mates with the ability to traverse their bases in a vertical fashion. Shadowfrax has already explained the details of using the new elevator block in his previous video, so be sure to check it out if you need more info.

In other news, the new trail road has made its way into the game, not only adding a visual appeal to the game environment, but also to the game map as well. The map features look more realistic and now include the trail roads. Cartographers and general map enthusiasts may now save a print out of the game map to their hard drives by entering the console command ‘rendermap’ in the F1 console. It might be a good idea to test this out while you are in a safe place, since the resources to render the map may lock your game up momentarily, depending on your system specs.

Greetings survivors and friends, Shadowfrax here with the latest thrilling ups and downs of Rust development, and as we’ve just had the first Thursday of the month, that means Mr. and Mrs. forced wipe have paid us all a visit and jammed some new content through our letterboxes.

In what is quite literally being called the elevator update, because there wasn’t anything else more exciting this month, we do, of course, have something to raise our building game in the shape of a new elevator block.

Now, I told you everything you need to know about this in last week’s video, so watch that for more info, so I don’t have to repeat myself, just whatever you do, don’t park your horse at the bottom of a lift shaft, and remember that if an elevator block is destroyed, then all those above it will be too, even if you have them encased. Swings and roundabouts.

Another new thing that I covered last week is the trail system, which adds beaten tracks to the smaller monuments where before there were none. Not that we need them to find our way around, but they’ll probably help you psychologically and bring the added benefit of a few less places to build.

Talking of which, the road network – which has been SUBJECT TO CHANGE for a long time, in this patch has become bigger and more organic. This was accomplished by making it less efficient when it comes to going from A to B and, therefore, more like something that someone in charge of building roads would do.

You’ll also notice when looking at the map that the colors have changed to become closer to what you see in-game, which looks nicer-er. You want to grab that map image, print it out, laminate it, and send it to your favorite auntie? Well, you can now by just typing ‘rendermap’ in console, just not when you’re doing anything important because it can lock up your system for a couple of seconds, which is usually all that separates you from death.

For eight quid or about 10 dollars depending on your local bureau de change, you can now get a space suit skin for the hazmat over on the store page. It doesn’t actually change anything apart from the visuals, and we’ve known about it for a while. But it’s nice to see skins for this item finally. The TEAM have also attached a bit of lore to it, it seems, which isn’t as good as mine, of course, but it does mean at least that I get to make another video.

Talking of things that make sense, you’ll now need a hammer to pick up a sleeping bag or beach towel, and just before you start having a coughing fit, no, this only applies to your own; other people’s ones are still superglued to the grass.

The reason for this is because a lot of you were accidentally picking things up like electrical items, which in turn broke circuits, and to offset your clumsiness you’ll now have to press and hold the use button for a short duration to do this instead of a single press, which means now you need a hammer to pick up a sleeping bag, why, not sure, just accept it. Join us next month when you’ll need a flamethrower, the blood of a small monkey, and a letter from your local bandit camp to light a furnace.

Teas received a buff, well some of them. I outlined this last week, but you can pause here and read the increases for yourself if you like, plus notice that the icons have changed to make tea identification easier.

Massive cloth farms, which weren’t good for anyone’s framerate or the economy, shouldn’t be that viable now thanks to a change to vendors. NPCs will now replenish their stock of items over time instead of always having an infinite amount in the back. This isn’t massively noticeable apart from the produce exchange itself, and I didn’t clock any appreciable difference when it came to vending machines.

In other changes, Steam networking is now supported as an opt-in alternative for the current networking system – Raknet – which isn’t being maintained anymore and for other reasons just isn’t cutting the mustard these days. It’s not going to take over for a while, but server owners can start using it if they wish, and if that’s you, then I’d recommend pausing and reading this part of the devblog before continuing.

Elsewhere, as well as a number of useful new demo commands, Big Brother, I mean server owners can now record demos from the perspective of any player connected to the server by specifying their steamid, and can even choose to automatically record these for certain players whenever they join the server.. Just in case someone’s acting a bit sus.

There were many other small changes and tweaks, pretty much ones that I’ve already covered, but the most exciting things at the moment are works in progress. Where the weather is really making a splash, with better rain, snow, and fog being forecast, along with possibly more control over the atmosphere at some point, and I’m really looking forward to showing you this when the time comes.

The Hapis map continues to be rescued; there’s a couple of stables monuments being made and an intriguing ‘shredder’ being worked on in the vehicles branch. What do you think that could be? Let me know down below.

Right, you’re up to date, say thanks by liking and subscribing if you’d be so kind. Join me on Twitch, Twitter, Facebook, Discord, and my Steeeeam group to stay up to date with my content. Thank you to my patrons for their support, which helps me continue to make these for you every week. And I shall catch you all soon, but in the meantime, keep calm and stay Rusty.