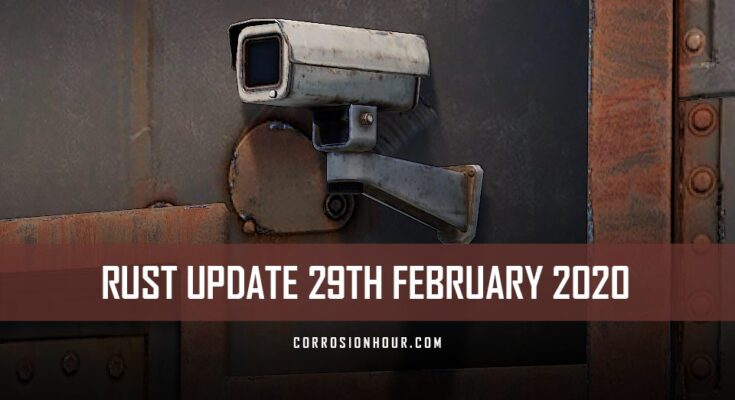 In this late update, Shadow Frax gives us a quick look and some new details on the new working CCTV, that just hit the staging branch in RUST for players to test out. Two new items to keep a lookout for are the:

The new CCTV allows you to set a new ID and direction in which it points. From the computer station, you can mount the cameras and monitor them as expected. But how this works may change as they’ve only just hit staging. Will this be the death of door camping as we know it? Has the big brother state finally taken hold?

Greetings survivors and friends, Shadowfrax here with another quick Rusty newsflash, because just today without any warning, a working CCTV was added to Rust, on staging.

So I just wanted to get this video out there for you to show and tell what I know right now, but of course I’ll have a much more in depth look at them for you in next week’s update video so make sure to subscribe to the channel and ring the notification bell right now.

So we have 2 new items well, 1 technically. The CCTV camera, which is basically the one you can find in loot. But which can now be attached to your base, and the computer station from where you can spy on the world. However, the station doesn’t currently need power to work.

Here’s how to use them.

First place a camera, on a wall somewhere, then hook it up to some power. After that you can whip out a hammer and press E to see some options. You can pick it up, set direction and set ID.

Setting direction makes it point at wherever you are standing. And setting ID lets you give it a name which can be up to 32 characters alphanumeric.

Next you simply go to your computer station and mount, which will put you inside the computer. Then on the left you can add the ID to a list of devices which can be accessed and switched between.

This is all very new and a work in progress so you should expect a lot of things to change, be added to and switched around before it becomes live for everyone to play with on Main Because as I say it’s only on the staging branch right now.

As I speak these words, the cameras are fixed and can’t be swivelled or zoomed with, but Helk has told me that there’s the possibility for other remote controlled devices in the future, including turrets!

Also, note that cameras can be accessed from anywhere on the island, and you only need to know the ID of a camera to access it, no authorisation needed. So make sure to use an obscure one when you name them. No camera1 camera2, or 420 etc etc.

Also also and here’s an interesting little tidbit if you enter the ID DOME1 into the station, you’ll be able to see this and apparently there’ll be quite a few more cameras like this to log into.

At some point soon there won’t be any need to leave our bases what a time to be alive.

Please let me know what you think to this new addition down below, and if you have any burning questions, just say and I’ll try to answer them when I can.

Thanks for watching this newsflash, please leave a like, and join me on my other domains such as twitch, twitter, facebook discord and my steeeam group to stay up to date.

I shall catch you all soon but in the meantime, keep calm and stay Rusty, cheerio.