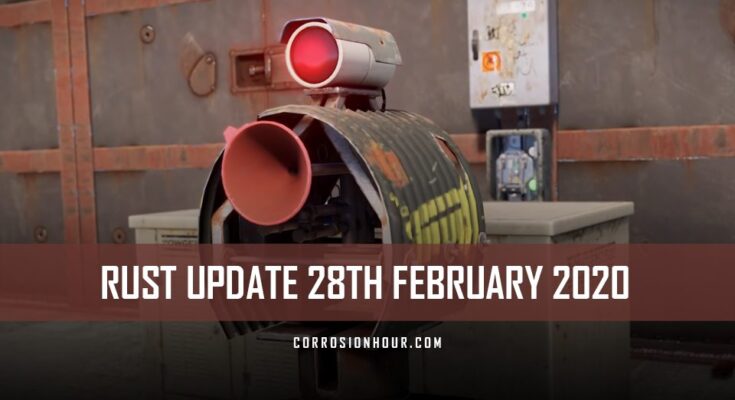 In this update video by Shadow Frax, he introduces us to the new trumpet turret, which allows players to put the musical instrument into the auto turret body. This allows players the ability to …well we’re not quite sure ourselves, but Shadow Frax is quite excited about it!

Currently, the trumpet turret will parp at players who enter its vicinity, spewing random notes and alerting the base owner, along with anyone in the audible range, of unauthorized players’ presence. Something to keep an eye out for, as they made later add customizations to what tunes it plays.

Further development has continued with the oceanlevel console variable, allowing admins the ability to adjust the server’s ocean level height, with the server running. They’ve also enabled some additional abilities to remove the underwater effect, through another console variable underwater_effect 0.

They have also added in the ability to now bind commands to composite key binds, which can help you to create more comfortable combinations and possibilities for control. There’s also a new meta.add console variable that can be used to create incremental binds.

Further content creator developments have also made their way into the staging, with numerous features, such as camera parenting, which locks the debug camera allowing admins to capture very unique footage. There are many new changes in this area to look out for.

There are also signs of Garry’s continued efforts on making updates to the Steamworks integration and networking, in which we should see more about this work in the coming weeks. There’s also a new branch of code in which work is being done to increase performance on the nav_mesh, used when compiling a new map — this has substantial performance impacts for servers starting and restarting.

We also see some fixes to aim jumping and a new background image added to the EAC startup window.

There’s also more talk around the new RUST Farming 2.0 system, where sprinkler systems and other controls similar to the electrical systems in RUST may appear sooner than later. We also have potatoes and horse dung making their model debuts in due time.

Greetings survivors and friends, Shadowfrax here with your weekly blast of Rust development news. And I have to say, you can call the TEAM at Facepunch what you like, but if there’s one word to describe them this week, it’s ‘LEGENDS’.

May I introduce you to the Turrrrumpet.. Or should that be the Trumpeturret? Whatever, this is not an illusion.. or an early April fools.. and not wanting to blow my own.. horn, but this is something that I kind of suggested.. although it may have been intended from the start, and it is a bit of a no-brainer, but I did suggest it.

Yes, as well as being able to create a custom turret from about 20 different shooty sticks now, including the legendary eoka turret.

Over on the staging branch you can currently wage psychological warfare as well by simply inserting a plumber’s trumpet where it hurts the most and plugging it into the mainframe.

It works pretty much as expected: Unauthorised players who enter its territory will be parped at with terminal intensity until they remove themselves from the area.. The turret ejects a ferocious barrage of notes directly into the victim’s soul, whilst simultaneously alerting defending forces to the intrustion.

The only downside of this majestic display of auditory terrorism being that the notes themselves are seemingly random. Although maybe the randomness adds to the sheer terror of the attack?

Although the ‘Pingu pistol’ (for that is what I shall also be calling it) is the ultimate alarm system.. it sadly isn’t programmable yet and can’t be made to play a specific tune.. I did ask, but apparently that’s tricky as it needs to run without the player being connected. I’m not going to give up hope completely though.

So question of the day: If you could get it to play a tune, what would that be? Answers in the comments please.

Oh and make sure you C4 the subscribe button and stab up the notification bell for weekly Rust news, and other stuff.. If YouTube decides to let you know..

On staging we’ve had a ton of new commands which will be of interest to content creators and server owners alike.

First of all as mentioned last week, admins will be able to adjust the server’s water height with the oceanlevel convar.. 0 is standard, and increasing it will lead to some interesting and rather wet results. Can’t wait to see what you lot do with this.

There were a couple of fixes to help it work better, including not being able to set it to a negative amount, shame and some AI tweaks to make scientists avoid running around underwater (oh come on, why take away my one pleasure in life, seriously?) and, as mentioned previously, admins can also switch off the underwater effect now with underwater_effect 0

For reference you can also now bind commands to composite keybinds, for instance left control + x for kill or something.. and also a new meta.add convar can be used to create incremental ones. you can see me using it on the sea level here for instance. I’ll stick details down below.

Content creators have never had it so good either.. And to show you what I mean, the debug camera has had some serious upgrades this week..

First of all, we now have guides which can be turned on, off and switched between with debugcamera_guide 0 through to 4.. And in order they are: rule of thirds, golden ratio, aspect ratio and crosshair. And just so you understand, these are exclusively for those with admin rights and only work in debug camera, not first person.

The aspect ratio can be set to whatever you want, such as 2.35:1 or 4:3, and the guide colour can also be adjusted.

My favourite new cinematic tool however has to be camera parenting, and it’s very simple. When in debug camera, just look at an entity and press F which will lock the camera to it you can then offset the camera using W A S and D and orbit around it with control plus the arrow keys..

For entities with bones.. such as players and animals. You can cycle through which one you’re parented to with tab, but the best thing has to be the new bonerotation convar which moves the camera with the bone. Here are a couple of examples. And yes, it works with projectiles too. I have so many ideas.

You can also open a browser for demos now with demo.browser, where you can see a list of which ones you have in your folder and then play them directly plus a HUD which can be toggled and general improvements to playback.

What I’ll do, instead of boring all of the ‘normal’ players watching this is to put these commands in the description, and don’t forget, they’re only on staging at the moment and subject to change before being merged to main on March the 5th.

In other changes, Garry has been doing some work to improve Steamworks integration and networking. More info on that hopefully next week.

And some improvements to navmesh baking are being made on a separate branch at the moment, which if you don’t know is a step during a server’s startup that can significantly affect startup time. So far this has been sped up fourfold, so server restarts should be much quicker in future.

There was a fix for aim jumping when stopping shooting whilst mounted on something. And there’s a new background for the EAC startup window. Fancy.

In works in progress!

Lots being done in the field of farming, the sprinkler system will be interesting and sounds like it’ll work on the same general principles as electricity, with fluid switches and planter sensors. Except there’ll be gravity to take into account as well.. There’s progress on potatoes. And there are models for horse dung and horse dung piles out there somewhere.. but unfortunately I can’t show you any of this lovely stuff yet, because it doesn’t look like it’ll be ready until April’s patch.. But stay tuned and I’ll shovel any news I get in your general direction.

And according to the commits, it seems the HDRP branch when it eventually merges will have a lot of new assets, including new pine saplings, dead pines, updated overgrowth models, and better textures for a lot of foliage. Can’t wait for that.

Right! You’re up to date.

Come and join me on Twitch for survival streams three times a week, help my channel here to survive and thrive by supporting me on Patreon, and stay up to date with all my content and news on Twitter, Facebook, Discord and my Steeeeam group – links below.