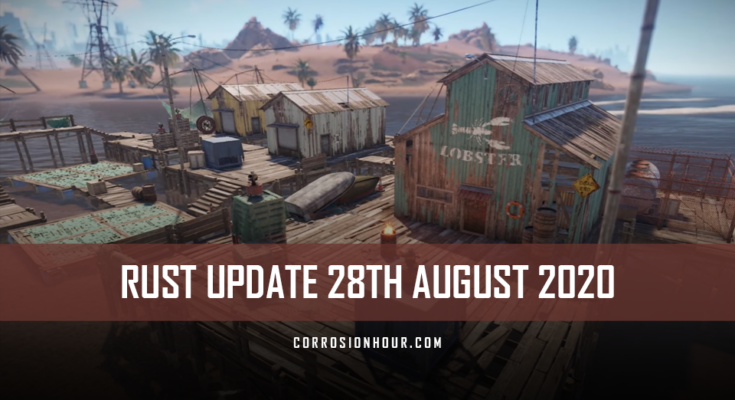 This week in RUST development, the fishing village has arrived on the staging branch! Shadowfrax gives us a quick tour of the new monument that appears to come in small and large varieties. While it seems that there is still additional work to go, the new boat shop “shop” is already peddling boats for sale. Among these items for sale are blueprints for the new Kayak and Paddle, which are player craftable and can also be found as loot and researched.  As of this post, paddles can be used as weapons, but having one drawn in a safe zone does not flag you as hostile–until you throw it at someone, that is. You’ve been warned.

In other exciting news, a much-awaited change to Workbenches now allows them to be picked up (finally) with building privilege. Picking these up will reduce their health by half, so be ready to repair often. Levels 2 and 3 have also had their max health reduced by 250, making them more fragile overall.

Greetings survivors and friends, Shadowfrax here with your weekly haul of Rust development flotsam. Where today we have storage monitors and workbench changes, but first! I try to produce one of these vids every Friday, so if you’re not subbed, then now’s a good time.

To start with though. As September’s big patch hoves into view. And is now less than a week away. We’ve seen some big new things splash down onto the staging branch in preparation—namely, the fishing villages, Kayak and paddle.

So let’s examine those in order.

First of all the new fishing village monuments come in 2 flavors, small and large. And on a 4k map, it seems 3 of them should spawn, that’s 2 of the little ones and one of the big ones.

Both types are safe zones, which start pretty much where you clamber onto the boards. And they’re both protected by peacekeeper turrets.

There’s only one shop at the moment, imaginatively named ‘shop’ here in a building disappointingly named ‘lobster.’ And to really rub salt into the wound, the surfboards are just props, but it does look like more is definitely planned for these monuments with a number of vacant buildings at the moment. I also like these net foundations, which look like a great starting point for water bases. But I’m just floating that out there.

As of September 3rd on the release branch, these will be the only places to get motorboats and RHIIIBS (apart from on the back of the cargo ship of course) because their spawns will have been removed from the wild, in the same way helis recently were.

As you should know by now, everything is always SUBJECT TO CHANGE, but at present, motorboats will set you back by 200 scrap and RHIIIBS will make a 400 scrap sized dent in your wallet.

When you buy one, it should automagically appear in the boathouse, with a bit of fuel in its engine for you to sail off into the sunset with. Not only but also, the vendors here sell scuba gear, and blueprints for kayaks and paddles!

Yes, the other big additions merged to staging this week were the new kayak and paddle items. The blueprints for which can be bought at the fishing villages for 50 and 25 scrap respectively or you can find them in loot and research them at home for 20 scrap each.

To use a kayak, simply hop in either seat, whip out your paddle and use your left and right mouse buttons, or A and D, to paddle left and right, in equal amounts if you want to go in a straight line. You can also go backwards instead by holding S while you paddle.

Not only that, but with an additional person going at it in the other seat, you can pick up a good bit of speed, as long as you are both vaguely in sync. Sadly the paddling animation doesn’t seem to be playing in demos at the moment. It looks so effortless.

There are a number of advantages I can see to this mode of transport.. apart from being reasonably cheap to craft.. it doesn’t require fuel, just elbow grease. both passengers can either help propel it or use weapons from their seats. and it’s much more stealthy than a motor vehicle. although it does still make a bit of noise.

The paddle is also useful on land as it doubles as a melee weapon, and like a spear can be thrown. The damage it does is in between a wooden and stone spear, but its attack rate and size are higher. Just don’t complain to me if you end up losing it and getting stuck up a creek somewhere.

Oh, also something to note, paddles are not considered hostile weapons to brandish in safe zones, but hitting someone with one there seems to be ineffective. And at that point the turrets certainly won’t be.

As I say, the boat vendors, kayaks and paddles will be merging onto the release branch for all of you to flounder around with on September 3rd, but I do wonder whether our fishing villages will at some point actually let us get involved with the act of fishing. And whether those vacant buildings will play any part in that. If you ask me, all self-respecting survival games should include fishing, and pies.. But you know how demanding I can be. Stay tuned and I’ll give you the low down on this when I manage to reel it in.

Some big changes to workbenches are on the way, and soon you’ll be able to finally pick them up, as long as you have building privilege of course, just note that they will lose half their health when you do so, although they can be repaired, and you should know that the level 2’s and 3’s now have 250 less health each. The level 1’s health remains unchanged.

I spoke recently about storage monitors. And it looks like the TEAM have added a very early WIP version of this with placeholder art to staging. At the moment it can only be deployed onto a tool cupboard, must be supplied with 1 power to work and it will be possible to pair it with your RUST+ app to monitor storage. I believe it’s planned for this to work with boxes too, and it also has an electrical output that isn’t being used for anything yet.. I hope to bring you more concrete details on this next week though.

In other changes, multi-engine vehicles have been made a bit slower because they can be about as easy to control as a cat powered dogsled. Junkyards will now be able to spawn in tier 0 areas of the map. And signs and photo frames will now properly appear in demos, although updates to the signs currently won’t.

In works in progress, work on some new weather for Rust is still rumbling along in the background. No details yet on exactly what it’ll include.

There seem to be three branches at the moment focusing on different areas of performance; there’s animator_optimisations, flare_optimisations, and a new one called lowmem_experiments, which seems to be aimed at helping in low memory situations funnily enough.

Also, it seems destructible road signs probably won’t be making it in this next patch, but rather October’s one, however, it seems they will drop 1 metal pipe and 1 roadsign when destroyed. Wow, that makes far too much sense, I’m scared.

Thank you for lending me your eyes, please leave a like and sub to the channel to get them back. Follow me on Twitch, where I stream things, join me on Twitter, Facebook, Discord, and my Steeeam group to stay up to date with my content and a huge thank you to my patrons as always for their support. All the links you need are down below. I shall catch you all soon, but in the meantime, keep calm and stay Rusty. Cheerio.