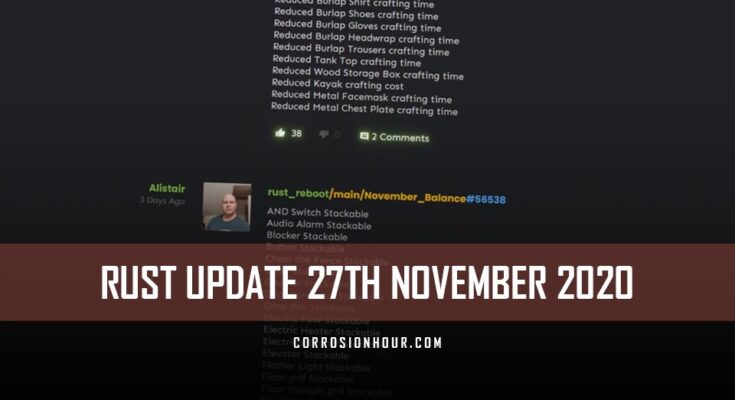 A great balancing is coming to the items of RUST thanks to the copious commit log of the ‘November_Balance‘ branch.  Many changes and tweaks have been made to crafting times, crafting costs, item conditions and their benefits and protections, adjustments to tea buffs, as well as reductions in crafting costs for some lower-tier items to make tier one play a little less painful. These changes are currently expected to be introduced into December’s patch to assess the effectiveness of the upgrades and collect feedback.

In other news, the new tech tree system is looking to make the docket for the December patch, as well. The tech tree system is designed to give players a linear path toward blueprint learning. Players will insert scrap into their workbenches now to learn the next-available item in the blueprint tree, rather than experimenting to learn an item. At this time, no changes have been made to the way that the research table operates.

There has been an awakening… Have you felt it?

Greetings survivors and friends, Shadowfrax here with your distilled weekly concentrate of all things Rust development, wherein this episode I have some info on the new tech trees for you, but first, it seems that just over a week ago, there was some kind of an awakening when suddenly the TEAM reached critical mass and it was decided that balance needed to be brought to the Rust. And thus, the ‘November balance’ branch came into being.

The mission statement was to make a bunch of minor balancing tweaks, mainly focusing on underused/craft items, and suggestions were taken. The result of this was around 260 rapid-fire changes that saw a whole shed load of crafting cost and time reductions and the making stackable of many things that were not stackable before.

Now I hope you don’t expect me to list them all here. Ain’t nobody got time for that unless you really are having difficulty sleeping. So in the interests of space and sanity, I’ll drop a link to a very handy comprehensive breakdown of all the changes plus values, put together by our friends at Rustafied, and the link will be in the description for you.

However, I have picked out a few that I think are the most important to know about. Namely:

Reinforced window bars now have glass, and their health was reduced to 500. Anti-rad pills now include a lot less salt with a huge reduction in the amount of dehydration they inflict you with. And large medkits now provide a small amount of instant health along with reduced crafting cost and time.

Hazmat suits now use condition and can be repaired. All diving gear can now be recycled. Ripe potato plants yield more potatoes! The yield of pure ore tea was reduced to 50% and advanced to 35%. And you can now pick up your Kayak with a hammer, although it loses 25% condition each time.

Now all of these are currently live on the Staging branch for you to feel the difference but will be merged for all to enjoy with the next patch on December 3rd.

Also, in other changes, Stables shouldn’t spawn too close to other monuments, and their safe zone areas were reduced slightly. Launch site floodlight towers now have radiation. And there was a fix for photos not loading when many try to load at once.

Ok, so something else that’s planned to drop with December’s patch, SUBJECT TO CHANGE, is the techtree system, which it seems will allow us to unlock blueprints in a more linear yet predictable manner. Think the XP system, but with scrap still being the currency instead of experience.. and here’s a little bit of video from the current progress.

What this means is that experimentation to get random blueprints will be no more, although it will still be possible to research them through the bench as normal and come across them in other ways such as through loot and by buying them from players. Therefore you don’t necessarily have to unlock them through the tech tree, although a higher tier blueprint won’t grant you access to research those above it unless you have already unlocked all of the others below it. Capisce?

I’ll say it again, because why not. This is all SUBJECT TO CHANGE, so don’t take what I’m showing you here as final either in layout or visuals. But I will be bringing you more concrete info on this next week. So subscribe if you haven’t and slap Schroedinger’s bell.

In other works in progress this week, there’s still a bit of work on the HDRP backport going on, no new images to show you yet, though; same thing with the Hapis island rework, and there will be some significant changes here when it finally drops.

A few commits related to the drone are trickling in with one regarding deployment and pickup that I assume is player-related, although I can’t confirm that yet.

And there are a huge number of commits related to the workcart branch, from which we can gather that it will be possible to destroy one and that there will be double lanes at some points and junctions where players will be able to choose different tracks.

Ok, so tell me what you’re thinking right now. Do these changes spark joy? What do you think about tech trees? Are you pining for a system like that, or should they just leaf it out? Let me know down below.

Join me on Twitch for streams, stay up to date with my content on Twitter, Facebook, Discord, and my Steeeam group and support the channel with the purchase of a SUBJECT TO CHANGE shirt or by becoming a patron like these fine fellows on the right. I shall catch you all soon, but in the meantime, keep calm and stay Rusty, cheerio.