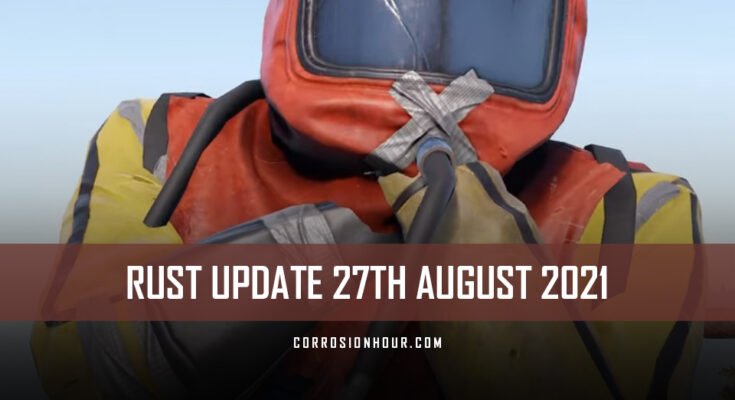 We’ve got a week to go until the September update drops! I know we are all wondering what commits will merge and which didn’t make the cut, so here’s what we know so far.

First up, the drowning / low oxygen situation. This feature is currently on staging for users to test out. The oxygen status indicator will give you a better insight into how you are presently breathing (or possibly not breathing) by showing an icon indicating the source of your oxygen (lungs, diving tank, sub hull, you get the idea.) Additionally, the status indicator will show you how much time you have left on the oxygen source to help you better plan out your trip into the great blue abyss.

As was mentioned in last week’s update, RUST submarine hulls will no longer be an infinite escape from the surface world. As soon as the submarine is fully submerged, an oxygen timer will begin and continue to tick down until the sub resurfaces. As of this time, the maximum oxygen inside of both sub varieties is 10 minutes of oxygen, after which time you will begin to asphyxiate on your own bad breath. Unless, of course, your survival prowess kicked in, and you brought a diving tank with you. That would be a good idea.

Additional to the changes with subs and breathing inside them are the changes to the underwater lab generation. Remember last week; the devs made changes to procgen to spawn fewer labs per procedural map. But, changes also included tweaks to ensure that labs below a specific size were less likely to spawn, giving you more bang for your sealab buck. These changes are also on staging to test out.

For anyone looking to try out features before they even make it to staging, the AUX01 branch will act as the pre-staging staging branch. If this sounds like something you’d like to do, make sure you’ve downloaded and installed the RUST Staging Branch from Steam.

When you are done testing the future, you may go back to the Betas option screen and change the option back to ‘none’ to queue the regular staging branch to install files that are on the main staging branch. Enjoy!

Greetings, survivors and friends, Shadowfrax here with your obligatory weekly data burst of Rust development news, and as it’s getting close to September’s patch, we’re all starting to wonder exactly what new and exciting things it will bring for us to start complaining about.

Well, I’m going to try to give you some idea today, but first. I see a lot of you haven’t joined the ring-a-ding-ding club yet, so now’s a good chance and, of course, sub to the channel to help me grow.

Over on staging. Drowning is being replaced by ‘low oxygen,’ which gives greater scope for asphyxiation than just trying to breathe water.. fun fact: did you know it’s impossible to drown in lava?

As far as Rust goes, though, soon, you’ll have limited times between dives in a submarine and won’t simply be able to sit beneath the waves until you run out of snacks and drinks. From being surfaced, and yes, that includes moonpools. A submarine will have 10 minutes worth of oxygen in it which will start counting down as soon as you fully immerse.

But you say, ‘What about if rub-a-dub-dub, there are two men in a sub? Wouldn’t there be only 5 minutes of oxygen?’

Haha, well, as Rust is a hyper-realistic simulation of actual life, the answer is, no, the more people you have in a submarine, the shorter and shallower their breaths, of course, plus we wouldn’t want to give solos an advantage now, would we? Hah, Lol.

If you do want to stay down where it’s wetter for longer than 10 minutes at a time, you can, of course, pack a diving tank, and as soon as the oxygen in the sub runs out, you’ll automagically switch over to using it.

You’ll also know from which source you’re breathing, thanks to a couple of snazzy new animated icons that will display next to your oxygen status.

Another new feature coming to submarines will be storage, and for both, this will mean 12 slots to snaffle things away in. In the duo sub, a box will appear in between the driver and passenger with a bit of subtle extra lighting to help you find it, and in the solo, it’ll be on the outside next to the fuel tank, which conveniently can also be accessed from inside. REALISM.

Along with this, torpedoes are being made a tiny bit faster, the new pedestrian access moonpools are on staging now, and as well as fewer underwater labs – about three on a default map – they should be a bit more spread out.

All of these changes will be coming to release in the next patch, but what do you think of them? Are they a breath of fresh air, or would you rate them as sub-standard? Please let me know in the comments down below.

Back on land. A nerf is coming to crawling, with the crawling-wounded having their health reduced by 75%. That’s a lot of damage.

A few more spawners and prefabs were opened up for map makers to use, and talking of which, I’m sorry to say this prefab-wolf, but it seems they fixed that floating crate of yours.

Yeah, shame about that; at least I’ve got another one around the corner, a bit more subtle it is.

Over to works in progress, and I was really hoping to be able to show you some actual images of the new desert military bases this week, but alas, the TEAM are still working on the visuals, so you’ll have to make do with my rendition for a little bit longer.

The same thing goes for the new camper module that’s coming for cars, although we do seem to understand the functionality of it quite well from the commits now. It looks like it’ll provide a spawn point for at least three players, having seats which double as sleeping bags and give comfort, and a built-in locker and bbq.

Again we’ll just have to wait to see what it looks like, but in the meantime, I’ve spent minutes literally making you a highly accurate depiction of what to expect. Savor.

In Rust staging in your Steeeam library, you can now access a new beta called Aux01, and this is basically staging plus or minus, depending on how you want to look at it. In essence, this is where the absolute cutting edge of development will be happening now before it even goes to staging but will, of course, be potentially even less stable. Also, don’t forget if you want to try this out, you’ll need to join a server running the same branch.

Lastly, in works in progress. Helk still seems to be busy with implementing missions, which, as you may remember from September’s devblog of last year are meant to ‘allow players to acquire items and blueprints from means other than simply farming scrap,’ and that said missions will be provided by NPCs at certain monuments such as fishing villages and stables.

Details are sparse at the moment, although we have seen commits regarding being able to receive phone calls from NPCs, and interestingly, although not necessarily related, are some fresh commits that have popped up about Nexus.

So what’s that? Well, you may remember me saying something about this a few months ago, but there was talk of a new nexus redirect function that could make a client switch to a different server.

TL;DR server transitioning, which is something that’s been on the cards for a very, very long time.. and means being able to take your character and gear with you and go to another server.. with limitations, of course.. so don’t start imagining you’d be able to jump on a 10,000x server, make a billion C4 and go raiding everyone on vanilla, that’s just stupid.

No, I think rather this could be something to do with mission objectives, but I might be completely wrong, and it’s just a coincidence. Still exciting, though.

Right, you know everything you need to now. Follow me on Twitch for streams, Twitter, Facebook, discord and my steeam group for content updates, and you can support my efforts in a number of ways, such as with YouTube memberships now, by becoming a patron on Patreon, or just by grabbing some SUBJECT TO CHANGE merch over on my store.. all the links you need are down below, I shall catch you all soon but in the meantime, keep calm and stay Rusty. Cheerio.