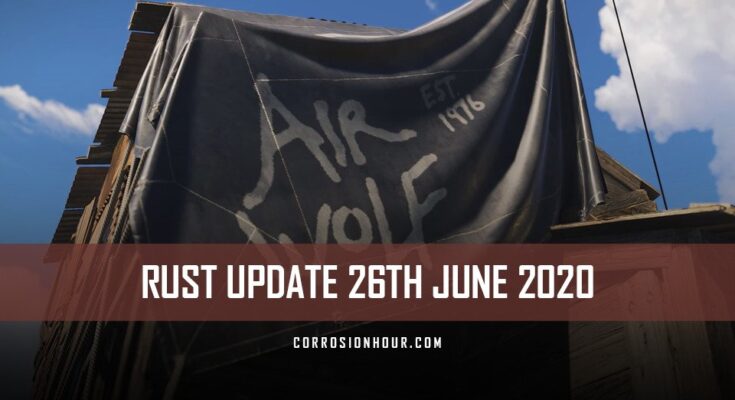 In his weekly RUST Update, Shadowfrax brings us some news on the fine-tuning of the new vehicular lock system that is set to roll-out with RUST modular cars in July’s RUST Update. Even more exciting is the upcoming addition of the RUST Air Wolf vendor, a new shop inside of the Bandit Camp that will now separate us from our hard-earned scrap for the pleasure of a helicopter of our choosing that once spawned in the world. For free.

Greetings survivors and friends, Shadowfrax here with your weekly report on the ever changing world of Rust, and today, as we edge gingerly towards the forced wipe and big patch due on THURSDAY 2ND OF JULY, you’ll have to prepare yourself not just for the hum of (hopefully) distant engines.. but a few more changes that definitely will impact you in one way or another..

Please make sure you’re subscribed for weekly updates and news of other upcoming games.

So, vehicles are rolling out next week, whether you like it or not.. they’ve been in production for longer than we’ve been in lockdown.. not that time means anything these days, but thanks to the crash test dummies on staging, their rough edges have been thoroughly probed, resulting in some finely tuned, idiot proof machines, hopefully.

Last week I showed you exactly how locks work on them, so if you haven’t watched that vid then now’s a good time.. However, there are a couple of key changes this week you need to be aware of.

Now, unless you actually have a key for the car in your inventory, the drivers seat should also be off limits to you.. So no random Newmans hopping in the cockpit to stop your getaway.. Talking of which, there’s now an advanced automatic central locking system, which can only be accessed from inside the vehicle and can be used to deny or grant access to your doors.

Among other tweaks, crafting costs have been lowered for modules and engine components, and players without keys or lock access will no longer be able to push cars when they’re in a safe zone, and more on safe zones in a moment.

In order to gear us up for the imminent arrival of cars, Rust island’s knobs and dials are also being adjusted.. The default map size has been increased to 4500, instead of 4250.. some resurfacing work was carried out to make road topography a bit gentler, and give us smoother junctions, side roads are slightly wider than before and road décor has been moved a bit further out.

Also in this next patch you’ll notice some significant changes to the scientist compound, bandit camp and the way safe zones work, and these are currently live on the staging branch for you to fiddle with.. First of all in the compound the number of recyclers has been increased to 3 to combat griefing, also, tier 2 engine parts are no longer available here.

And that’s is because their new home is.. here. Introducing a fresh business in town.. or camp.. The Air wolf vendor.. Or as I wish they’d called it: Bear Wolf.. missed a trick there.. which is a new, fully enclosed shop that’s been thrown up in the bandit camp and which deals exclusively with vehicular matters..

Up top you’ll find a bandit with a very focused stock of tier 2 engine parts and vehicle ramps.

But it’s downstairs where the majority of the action will happen, because as of July the 2nd, you’ll only be able to get your greasy mitts on new helis here. Yes, instead of them spawning in the world, you’ll have to cough up quite a wedge of scrap for the privilege.

If you talk to this vendor, you can actually get a rather rpg type conversation going, although they’re only really interested in your wallet, and there are only really 3 outcomes, buy a minicopter, buy a scrap transport, or sorry I’m a peasant and it’s too rich for my blood..

Everything is SUBJECT TO CHANGE of course, but currently, minicopters are 1500 scrap each and transports will make you 3000 scrap lighter. OK, so you might have to win a few times on the wheel of misfortune to afford those, but at least each one comes with a free tank of fuel! Well. 100.

There are a number of rules around this place, so pay attention, I shall say this only once.

If you do cross the vendor’s palm with scrap and purchase a heli, you’ll have 2 minutes to fly off with it before it gets repossessed. Also, within that 2 minutes only the player who has bought the chopper will be able to mount it and access its fuel tank, (and no, that doesn’t extend to your TEAM, just currently) plus it will be protected from damage during that time.

Now you might be thinking, hey the bandit camp has a helipad now, that’s jolly handy.. I’ll use that. But wait, you must remember the customer is king.. so although you could use the pad to pop to the shops, if someone buys a heli whilst yours is sitting there, then yours will be destroyed to make way for the new one. You’ve been warned. Also with this change to heli acquisition, their decay timers will be extended, although by how much hasn’t been decided yet.

Now, as safety is the number one priority in Rust, we need to talk about safe zones, because there are a few changes coming.. First of all, the Bandit camp is now completely a safe zone, and this is roughly the radius. sam sites won’t target helis within this zone.. and things have tightened up here now, as bandits will no longer tolerate drawn weapons.

However, it’ll no longer be possible to actually draw a weapon inside a safe zone.. animals won’t target players who are in a safe zone, and players who are not hostile will take no damage whilst they’re inside one, which is bad news for roof campers.. and sleepers will be automatigally killed after 20 minutes inside a safe zone instead of needing an NPC to find them, so no hide and seek.. Lastly the safe zone sphere is also available as a prefab for map creators.

Something else you’ll notice if you’re observant is that high external wood walls and gates now have updated models, with different wire at the top, along with a new dedicated lock position.. wow.

But you say, Muh FPS is already bad enough around the bandit camp, am I to go down to only 2 frames per year now? Well, you’ll be pleased to know that some attempts are being made to mitigate this by, amongst other things, optimizing the wooden cabins, and merging the bandits outfits into a single suit, so that they perform better.. But we’ll just have to see what impact this will have for everyone.

A couple of other tweaks this week on staging, large banners will now decay outside of building priv zones and small boxes can no longer be deployed inside trees, awwww.

There are some new convars, for cinematic enthusiasts, which I’ll list in the description for you, but basically these let you save and load loadouts onto players and npcs, rather like a kits command.

And as some of you have twigged from the commits, a new DLC is being worked on it seems, simply titled ‘Summer’ DLC.. And although we don’t have all the details or any visuals yet, you can see it’ll include but not be limited to.. water pistols, sun glasses, a pool, a board and a beach chair.. But what else do you think it could include? And do you like the sound of some new fun items? Or does this smack of pay to swim? Also how do you feel about all the changes to safe zones and the bandit camp? Unleash your fury in the comments please.

Before you go, please give me a like if you found this video useful, follow me on Twitch where I stream three times a week and stay up to date with my content on Twitter, Facebook, Discord and my Steeeeam group, links below. As always a massive thank you to my supporters on Patreon who help me to get out of bed on a Friday and make these videos for you (not literally, that would be creepy), and I’d be honored to have you join their ranks if you can. I shall catch you all soon but in the meantime, keep calm and stay Rusty, Cheerio.