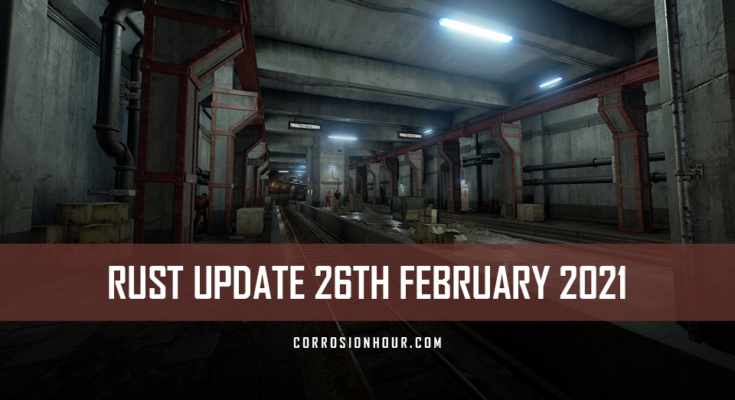 With a week to go until the next monthly update, progress is really speeding along towards getting the work cart ready to go live! Eager train enthusiasts can try the work cart out ahead of time by joining a staging branch server and locating a transit station located throughout the map. As of this update, transit stations are denoted on the map by a black and white transit icon, so you shouldn’t have trouble locating your nearest station.

To get to the tunnels, I suggest taking the lift, but if you are afraid of tight spaces, there is a winding set of stairs that will allow you to descend all the way down…on foot. As an added treat, once you are subterranean, you’ll notice that the game map goes into dark mode and now displays the tunnel network to help you plan your underground stay.

In other news, Double 11 sent out emails earlier this week to those who signed up to their mailing list with interest to participate in console beta testing. Anyone still interested in being selected for future beta tests can still sign up as Double 11 opens up more testing rounds.

Greetings survivors and friends, Shadowfrax here with your latest luxury gift set of Rust development news, where today I have all the current deets on the new tunnel system and workcart.

But first! Please like and subscribe because it helps me a lot, and it means I get to keep you up to date with all this stuff every week.

Before we journey into the depths, however, a certain piece of news takes priority because one or two of you have expressed a desire to know the answer to that eternal question: WHEN CONSOLE?.. Well, earlier this week, many people who had previously signed up to the Double Eleven mailing list (D11 being the company taking care of the console version) received an email regarding signups for a limited beta which will be taking place soon in North America and Europe.

This is all about stress testing the console version, and more players will be added as time goes on. There’s no date yet for it to start, but those who get chosen will be contacted later. Also, it’s not too late to put yourself on the mailing list either, and I’ll stick all the links you need in the description. Just make sure if you do get an email that it has actually come from http://double11.com. Not that anyone would try to trick you on the trusted platform that is the internet.

Right! This week saw the workcart and tunnel system finally emerge – albeit on a separate workcart beta branch on staging – and later today, hopefully, it will be merged into the main staging branch for all to test and break on any decent sized staging server. But it’s also on track to being released on the main game with the forced wipe on March the 4th.

So this is how it works. As well as the usual roads, trails, and cave systems, Rust will now have a separate, underground train tunnel network far below the surface linking all of the major monuments and perhaps some of the not so major ones. But lest you think traveling around via this will be a piece of cake, listen on.

You’ll now find ‘Fret rancit lin’ buildings stationed at various points around the map, which will grant you entry to the great underground empire. You can either take the stairs, which may give you flashbacks to the Shinra building. Or use the central lift shaft, which is a damn sight quicker.

A small, stealthy note on the stairwells is that there are a couple of dark corners to lurk in, an extremely sneaky cubby hole under the stairs at the very bottom and a vent shaft at the top that will allow you to take the tradesman’s entrance if you need to.

At the bottom of this first shaft is a section of pedestrian tunnels, but be warned, you’re certainly not the only pedestrian here. From here on, you’ll bump into these chaps, called tunnel dwellers, whatever their story is. And yes, there’s that jumpsuit I showed you last week, as well as gas masks which incidentally can both be spawned by admins from the attire menu. But I believe these were specifically made for these chaps, and there are no plans to sell them as special items on the store like the spacesuit was. Sorry about that.

You’ll then find another smaller lift shaft and finally emerge into the train tunnels, where you’ll be able to move around the entire island in ‘relative’ peace. You’ll also find loot in many places down here, and you’ll be relieved to know there’s no radiation.

While underground, pressing the map key will bring up a new version of the map showing the entire network and where each station is. You’ll also be able to print this map out separately at some point with the console command ‘world.rendertunnels’.

Now you could use your pins to get around, nobody will mind, but the quickest, most stylish way is to find one of the new zerg transportation systems or ‘work carts’ which will spawn in various sidings down here.. These have space for one driver, who whilst mounted cannot wield weapons but will take 50% less damage from everything despite there being no glass.. and a decent-sized group of players on deck who get no additional protection but can run around and do whatever they want.

The carts run on low grade, take up to 500 in the tank, and have three forward speeds and three reverse, in case you miss your turning or someone falls off.

They also have 1000 health, can be repaired with metal frags, but at the moment are only damaged by explosives or collisions. If exploded, the work cart will be destroyed, and the driver killed, boo hoo, but if it gets damaged to zero health by colliding with things, it will just become a non-functional husk and can be repaired from this state.

Talking of which, there are some sections of track where you’ll find more tunnel dwellers, who will keep respawning, plus they’ve put up barricades on the tracks that you’ll need to ram or push through, at a cost to your vehicle, you can also ram other work carts and push idle ones in front of you. And when a collision is imminent, an alarm will sound in the cockpit.

There are a lot of doors down here but only a couple open; everything is signposted clearly, though, so you should be able to see easily which exits lead to which monuments.

Of course, we have a week to go with testing and tweaking, and even after that, everything I’ve mentioned will be SUBJECT TO CHANGE, but let me know what you think in the comments, please, whether you are railing against this change or you think it adds extra depth.

Oh, and also technically, you can bring a horse all the way down here if it doesn’t get stuck on a doorway, although I’m sure the TEAM will patch this out eventually as it’s way too much fun.

In other news, on staging slot machines are now at the Bandit camp, you’ll find three of them in the wheel of misfortune room.

Also, on staging, RF transmitters should no longer flag players as hostile; you can now stick small boxes under the mixing table. Radiation has been removed from roadside substations, and the outpost should no longer spawn in the snow on procedural maps.

There were some server browser improvements; it should filter out empty servers now as default, apart from in history and favorites, of course.

For cinematics, there are now a few more poses in the list, such as sleeping, sitting, looting, etc., and a new admin convar ‘rottingflies.hide’ which, well, you should be able to figure that one out yourself.

There’s still a lot of work being done on AI, gestures, animal animations, and that submarine is starting to look very seaworthy now.

But in sad news, slient is no more; the RF pager has now been fixed. We will now observe a one-second slience for slient.

Yes, but OR and XOR switches still say eletrical instead of electrical. You know what, I’m going to elet you as president of spelling.

Please let me know what you thought of this week’s update news down below; leave me a like and sub to the channel, follow me over on Twitch for regular streams, Twitter, Facebook, Discord, and my steeeam group to stay up to date with my content, support me on Patreon and buy yourself some SUBJECT TO CHANGE merch on my Teespring store. Links below, I shall catch you all soon, but in the meantime, keep calm and stay Rusty, cheerio.