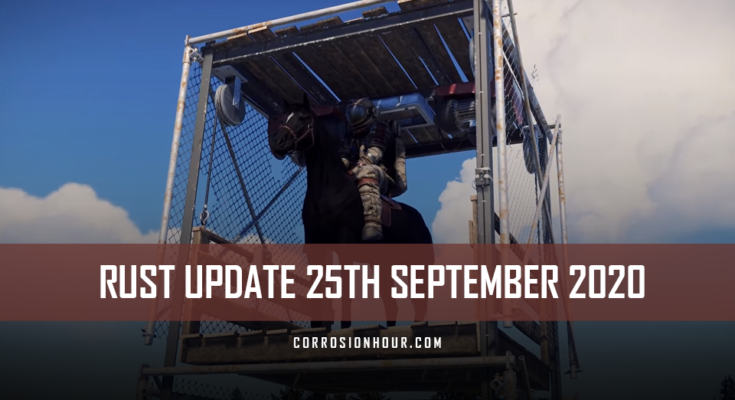 We finally have something to show for all of the recent tell about the new elevator block! Head on over to your nearest staging branch server to begin practicing with the new block before next week’s update!

The Elevator Block can be purchased from the scientist compound/outpost for the sum of 250 scrap (currently), researched for 125 scrap, and crafted at a level 2 workbench for 300 metal fragments, 6 HQM, and 3 gears. This is all subject to change by the update, of course.

In other news, a recent commit by Helk will throw the entire scrap farm meta for a curve. With this update, instead of having an infinite stock supply, vendors will now slowly refill their stock over time. We knew that this had to be coming at some point 🙁

Greetings survivors and friends, Shadowfrax here, and I did tell you I’d have some meatier news for you this week, didn’t I? Well, it looks like there’s plenty to look forward to in next month’s patch, especially if you’re a builder because you’re about to be going up in the world.

Over on the staging branch right now, you can play around with a brand new elevator block, which should take your builds to new heights.

Here’s how they work:

Each block takes up one foundation’s worth of space and can be placed on both foundations and floors. You can stack them on top of each other, and doing so creates a lift shaft up to a total of 6 high per elevator. Although, you can always create additional shafts further up in your base if you want.

They don’t require any blocks to be built around them for support, but you can encase them in walls and add doors for extra protection and security, and they can be picked up with a hammer and building priv.

They need power to work, of course, and you’ll be supplying that to the engine, which can be found at the top of each shaft; they use one power whilst on standby (although you do get a free light with that), and they’ll pull ten power when in use, however as with everything, including crafting costs, etc., this is all SUBJECT TO CHANGE, so don’t get too hung up about it.

To use an elevator, simply press the up and down buttons to go up and down, surprise, or hold e on them to open the pie menu where you can choose to go all the way in either direction.

You can also hook up a call button to this socket on each block to call the elevator to a specific floor. Talking of which, pushbuttons now give out a small burst of power when pushed without having to be hooked up to a source, and that makes them perfect for this job.

Not only but also, you can foil the efforts of rustlers by actually transporting horses in elevators, so it’s perfectly possible to have a stable with a view. What a time to be not dead. SOON. Just note that other forms of transport will block the elevator from working, just in case you were getting ideas involving minicopters.

Oh yes, and naturally, you shouldn’t stand underneath one whilst it’s descending—you idiot.

So, are you lovin’ an elevator? Or is this a let down for you? Tell me all about how this only benefits clans in the comments, please. ree.

Also, I wonder how long it’ll be until you lot start asking for a triangle elevator block?

You’ll soon be experiencing some changes to terrain when the forced wipe happens on October 1st. The most obvious thing being new trails, which are basically a third type of road that will be generated after the ring and side ones.

Trails will hook up all the small monuments to the network, as well as larger ones, and make them all easier to find. Because looking at maps is tough innit, plus, I guess it means a bit less grass needs to be rendered, which is good. Also worth mentioning is that junk piles seem to spawn along them, creating more looting opportunities. Unless that changes, and they also have a no-build area of about one block on either side of them, which is also good because there are far too many places to build currently.

Along with this better monument spawning and road connections, in general, are being worked on, so hopefully, this will all translate into a more believable and grittily realistic world come October.

Sticking to the subject of maps, you’ll recall that I mentioned a while back that there was a plan to shelve poor old Hapis island, which I know a lot of you were losing so much sleep over. Well, worry no longer; it seems as there’s a new Hapis rescue branch, and it looks like the plan to scrap it has now been scrapped. Petur at Facepunch is in charge of this one and has already started fixer upping it, so expect many improvements as time goes on.

There have been many fixes and tweaks over the last week, and to summarise the most important of these in no particular order.. bandit sentry turret range has been reduced. Windmills will now rotate in the direction of the wind. Reactive targets require a hammer to pick up.. being able to deploy through reinforced glass was fixed. And or switches no longer randomly spark.

NPC vendors will soon refill their stocks slowly instead of having an infinite amount available at all times, it seems. Advanced and pure healing teas will provide some instant health. Wood and scrap teas are being buffed to give 50, 100, and 200% yields for basic, advanced, and pure, respectively, and max health tea duration is being increased to 20 minutes from 5.

To works in progress now and according to the commits, a new stables monument is being created. So unless I’m very much mistaken, this will mean no more random horsies hanging around waiting to be ridden, and instead, their hooves will be behind a scrap wall in the same way that boats are. Not sure how you feel about that, could stirrup some controversy, I guess.

There’s plenty of progress on HDRP still and weather, although nothing new to show you on either yet, but most interestingly, a branch called ‘platform_types’ appeared recently, that seems to be involving spectators and CCTV, and that looks like it could be aimed at allowing us to see through cameras from outside of the game. Although, that’s just speculation at the moment. I’ll bring you something more solid when I get confirmation, though.

I do, of course, want to hear your highly intelligent thoughts on all of this in the comments, so please explain them to me thoroughly and sub to the channel and leave a like as well if you’d be so kind. I’m available on Twitch to watch live; also, Twitter, Facebook Discord, and my Steam group are all joinable to stay up to date with my content, links below. Thank you to my patrons for their continued support, which helps me to keep making these for you. I shall catch you all soon, but in the meantime, keep calm and stay Rusty.