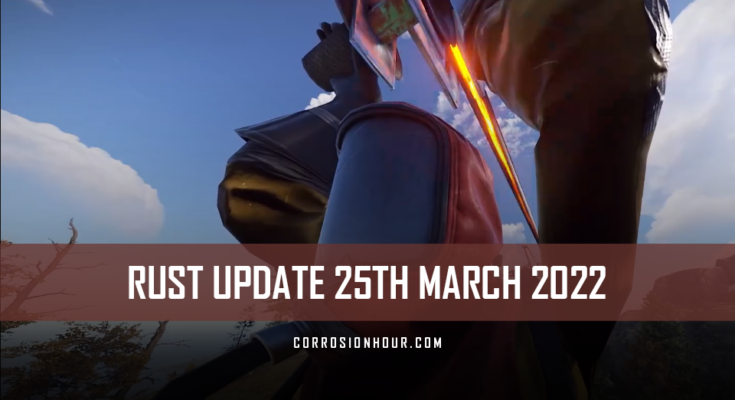 RUST development has been zipping along nicely and now we’ve got some visuals to add in for the new zipline system as well as the above-ground rail network.

Ziplines are here for testing

Players will be able to access the zipline system by locating large power line pylons that are now fitted with ladders. Scuttle on up these ladders to reach the zipline platform to mount a zipline and begin a terrifying decent to the connected platform. This will only work if the destination platform is at a lower elevation, as you would expect. Some platforms may even connect to monuments, if they are generated close enough.

If you are looking to try out the new zipline system before it releases in the next update, check it out now on staging. Just make sure you’ve downloaded and installed the RUST Staging Branch from Steam.

When you are done testing the future, you may go back to the Betas option screen and change the option back to ‘none’ to queue the regular staging branch to install files that are on the main staging branch. Enjoy!

The topside railway is still in heavy development, but some early glimpses of the system show that the rail network will form a loop around the game map. The rails will intersect roads and trails, so there’s still work to do to smooth out those interactions. It sounds like future features to be added in with the railway will include sidings, stations and even a custom train model specific to the above-ground system.

Greetings, survivors and friends, Shadowfrax here zipping back into your lives and sliding down the cutting edge of development, where today I can literally show you how ziplines in Rust will work, AND actual pictures and footage of progress on the above-ground train network.

But first of all, it would put my tiny mind at rest to know you’re subscribed, so slap that button, please, if you haven’t, and join the ring-a-ding-ding club to enter the notification lottery. Also, stay tuned as I have a rather good Facepunch related giveaway for you this week.

So this week, ziplines – which as with everything are – SUBJECT TO CHANGE – have been merged into the staging aux branch.. where they can be enjoyed by everyone.. details in the description of how to opt-in.

At present, you’ll find quite a few pylons have been upgraded to sniper towers *cough, I mean, have had walkways and ladders added to let you access the top where you will simply be able to look at a powerline to mount it and zip to wherever it goes, as long as that’s in a downward direction, of course.

Most will be connected to other pylons, and if near enough, they might also be connected to monuments, which is very handy. Plus, when you’re on one and want to go faster, just press W to accelerate to the blistering top speed. Although, a bit of WD40 wouldn’t go amiss. You can, of course, dismount whenever you want, but it’s not recommended.

They should be included in the next patch on April 7th, at which point most of the wrinkles should be ironed out, and we’ll have a much better idea of their final form.

Now, I’m very grateful that Facepunch let me canter around today on the above-ground trainline branch, and I can show you the latest progress on how it’s meshing with the road and trail systems.

Just to say that this is heavily SUBJECT TO CHANGE, and in a very basic form.. but it is on track to be included in the next patch.. although there won’t be trains spawning on it for a while. It’ll just be something nice to look at.

As you can see from the map of the server I’m on, which is procedural, the trainline forms a basic loop of the island, and in a number of places, it crosses over both trails and roads, which is one of the trickiest things to get right I imagine, although I’m sure there will be many procedural generation hoops to jump through to get it flowing right.

In subsequent iterations, you can expect to see sidings, stations, a double-track for travel in both directions, some kind of connections to monuments, and maybe even tying players to them; ok, I added that one. But we’ll have to wait to see how it all works. In addition, despite what I’m doing here, it looks like we won’t be using workcarts up top as a new train model is being worked on, apparently. The excitement never ends! Stay tuned for more on this.

In other news, getting artistic with the spray can will be possible again soon on staging; you can currently spray on things, and the spray will hang around for a while, although you still can’t be trusted with trees, apparently.

The magnet crane is receiving some more improvements, with a blue light being added to the cockpit, which will come on when the cabin is within 10 degrees of facing straight forward, and you’ll also be able to hold the crouch key to rotate it back to zero.

Work continues on darkening the airfield, I mean tweaking the lighting, plus plenty of stuff going on in the background from the TEAM still on Pets, the Brick building branch, and of course Hapis island.. which is going to be amazing, I’m sure. And I’ll bring you more on these when I get it.

Right, so as some of you may have heard, Chippy, that game Facepunch makes that doesn’t have anything to do with Chips. It just got released on the Switch and had a big update on PC to include things like local co-op, extra levels, and difficulty modes.. plus of course, for as long as you own both it and Rust, you’ll unlock the arcade cabinet in-game to craft.

Well, to celebrate, I have 5 keys to give away for the Steam version of Chippy, and you’ll find a link to enter that in the description below. I’ll get the winners picked on the weekend and send you an email if you’re successful, so keep an eye out for that, as if you don’t reply, I’ll give it to someone else.

Ok, you’re up to date. Let me know what you think of ziplines and trainlines in the comments and anything else you’d like to tell me. I do try to read all your comments; that’s why I have this twitch.

Talking of which, Follow me on Twitch for streams, Twitter, Facebook, Discord, and my Steeeam group for updates, and you can support me directly through Patreon, channel memberships, or via my merch store; links are all below.