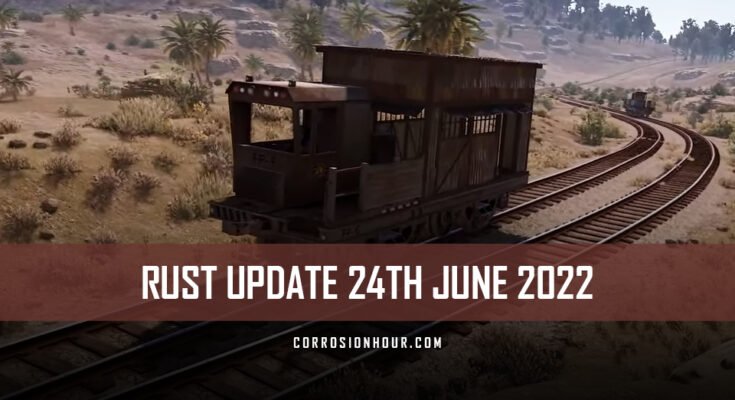 A lot has been happening under the hood in RUST development the past few weeks, in forms of more quality of life improvements and large-scale features. But first, if you or someone you know has been wanting to play RUST or get their hands on some of the DLC, now is the time to jump on it! RUST and the 3 DLC packs are currently 50% off during the Steam Summer Sale. Now, onto the RUST updates.

A lot has been happening to the RUST Trainyard the past 2 weeks. As mentioned in previous RUST updates, the Trainyard has been receiving updates to connect the above-ground rail system with the monument’s tracks.  Players should soon be able to steer their trains into the yard from the main rail line in order to interact with the monument.

More commits show that new functionality is coming to the monument, and to facilitate this new functionality is a new monument section, being referred to in commits as “the coaling tower.” This tower appears to be instrumental in processing/depositing ores into train wagons. This tower will be named with the winning brand from the Twitter challenge posted on June 6th, 2022.

Similar to how the Giant Excavator works, the coaling tower’s unloaders load the wagons of trains waiting below it with the desired ore over time. The ore wagons will visually display the amount and type of ore packed in their containers, labeling them as juicy targets for potential train heists and the like.

Commits this week reveal an effort to help server admins moderate player-generated content on their servers. This help comes from a new panel in the Server Admin UI under the F1 console.

Development of the new admin panel will allow admins to view all player-generated content on the server. The panel allows admins to view any painted sign, neon sign, pumpkin, egg suit texture, instant camera photos and potentially sprays at a later date. This tool should allow admins to moderate and delete painted work straight from the panel.

Additional work is being done to provide access to audio clips recorded on tape recorders to this same panel. Audio controls are also in the works to allow playing, pausing, and deleting.

Support for adding player identification for these creative works will expose player names and IDs so that administrators can perform the proper actions for offenders of their server rules. A search feature will also allow admins to look up all current works by a specified user. Admins will also be able to see a sign’s edit history from the panel.

Greetings, survivors, and friends. Shadowfrax here bringing you all the news you crave for Rust development, and this week, I’m gonna try to round up all I know about what’s coming in July’s patch for you, which shouldn’t take long.

There are some good quality of life things on their way, but I will say it’s fairly lightweight as far as patches go. There are some thrilling things coming down the pipe in the distance, though, and I’ll tell you what I can see through my binoculars for those as well.

First, some quality of life stuff and on staging at the moment as default kayaks will now face away from you, and mailboxes, barbecues, medium batteries, and wind turbines will face towards you when placing.

Horses can use elevators again, huzzah, although if someone’s underneath when they descend, then it’s not particularly good for the horse either. I’m sure this is a bug that’ll get squashed soon.

There are some new idle animations in the inventory screen which make your character feel that bit less like a mannequin, and hopefully, this is a precursor to status anims coming in soon at some point one day in the future.

On the admin panel, the ability to view and delete player-generated content and other forms of high art on the server is being worked on.

A number of spawnable presets for cars have been added for admins to take advantage of, and I’ll list these in the description, although they don’t come with components or fuel, so you’ll still need to use the fix cars command on them.

There are also some tiled cube prefabs coming for map makers, and here’s a preview. These will include brick, concrete metal, and wall tile variants.

Work on Hapis island continues with a sperm ket and gas station being added to the desert area.

The server browser will soon show whether a server has a custom map, and trains will soon be getting horns which you’ll be able to use with the left mouse button. But this isn’t merged in yet, so you’ll just have to make do with this mock-up.

In works in progress, and this is where it’s all happening at the moment or not. The train yard update is hopefully going to be testable on the staging branch near you from next week sometime.

Although it won’t be going live on the release branch until August’s patch, this will include the new reworked train yard monument with a new ore processing section that I believe will be an event involving a train. This will also require the monument itself to be hooked up to the rest of the rail network and hopefully all the other monuments, too.

Light switches are being added to certain monuments as well soon because of energy prices probably, and that should make for some fairly interesting plays.

Pets are still being worked on heavily, with a GSD model being mentioned, which I’m thinking either it stands for German shepherd dog or geriatric sausage dog. I think I know which one it is, though, and if so, it should be great for getting into small places for reconnaissance purposes.

The nexus branch is getting plenty of love too. If you remember, this is the function to allow travel between certain groups of linked servers via a ferry, and it seems as well as the normal island map we’re used to, there’ll be a larger scale map that shows all the linked islands their player counts and where you are currently. What a time to be alive.

And lastly, a parachute branch has sprung into life this week, and although it’s too early to tell the full story, it seems that weapons will be allowed whilst it’s deployed. Although you won’t be able to steer whilst once held, you’ll need to be above a certain height to deploy one 20 meters at the moment, and it’ll be possible to repack and presumably reuse them. Although I’m sure, this is all subject to change.

As I say, it’s a short and sweet one this week, but why not let me know what you think about the next round of changes down below.

You can catch me streaming on twitch. You can also follow me on Twitter, Facebook, and discord my steam group to stay up to date with my content when I produce it. And you can contribute to the channel’s survival via Youtube memberships, my Patreon, or my merch store. All the links will be below.

I shall catch you all very soon, but in the meantime, keep calm and stay rusty, cheerio.