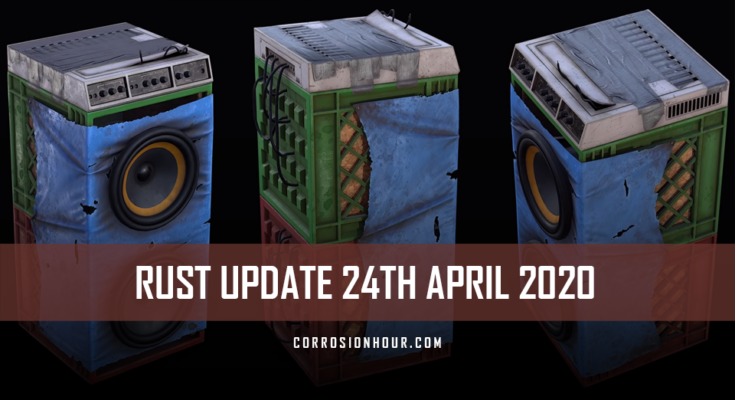 In this brief, RUST update video, Shadow Frax dives into the staging branch and gives us some glimpses into the future by touching on activities in several newer branches as well as development highlights surrounding RUST Modular Cars. He also gives us a look at a few new block updates that are sure to increase our enjoyment of building things and launching things. Below are the highlights of the video but be sure to watch to get all the details of what’s coming up.

Greetings survivors and friends, Shadow Frax here with your latest Rust news, which, like some cheap ham that was accidentally dropped, is a little bit thin on the ground, but here it is.

In the last episode, I went through a few changes to farming and water, and in addition to these now input and output, slots have been added to campfire powered purifiers. Fluid switches also now have inputs to switch them on and off.

As well as this, hardiness genes on plants now boost their temperature happiness, presumably making them more tolerant of colder biomes.

And congratulations to everyone who spotted the deliberate mistake in last week’s video. I stole a zero and hid it in a crate somewhere because water jugs actually will now hold 5 liters rather than 500ml, as stated. Slap wrist.

Over on staging branch, if you fire it up, you’ll notice that there’s a new splash screen, showing off the new Facepunch logo now with less punch and more face, So glad I got that merch with the old one on now, could be worth something one day. (Use code ‘shadowfrax’ on the store for 10% off)

And in works in progress, there are still a ton of commits relating to modular cars, including one that shows they’ll be able to spawn on road and roadside topologies, although that’s not to say that’s the only place that you’ll find them.

Also, in the commits over the last few days, some rather intriguing new features are being mentioned. First of all, as I briefly touched on in the last episode. A new branch called ‘voiceprops’ is being worked on. There was mention of cassettes and now a Radio.. which you may remember a very very old concept of back in the day. Here’s a more recent batch of concepts, though, which were produced around the time of the instrument DLC and which eventually led to this model being created.

Along with this support for shoutcast, is apparently being experimented with, which, is an online radio station broadcasting service. There’s also mention of an ‘allowinternetstreams’ convar to disable streams and replace them with copyright-safe content.

What fresh madness will this lead to, and exactly what functionality will it give us? I’ll have to let you know when I get the signal. So, stay tuned for more info.

Also interesting to note is another branch entitled ‘mixing table,’ and this is currently shrouded in vagueness, so exactly what will be mixed on the table is very much to be confirmed. Will it be substances? Sounds? Or pie fillings? Again, I’ll have to let you know when it becomes more solid.

Something solid I do have to show you, though is some of the latest work on the update to building blocks. First of all, conditional models, as you can see here that will affect the appearance of corners for one thing and make wooden bases look much more ‘cabiny’. And lastly, a look at the upcoming ramp block, designed with modular vehicle access, and I guess potential stunts in mind.

These will sit on the ground and foundations at a much shallower angle than foundation stairs and appear to be a quarter block high each at the moment, so you’ll need a good run-up in front of your garage.

I stream various things on Twitch three times a week, I’m saying that now because a lot of you still don’t know this, it seems. Link down below. Also, you can keep up to date with my content on Twitter, Facebook, Discord, and my Steeeeam group.. so join me there. Let me know your thoughts on this week’s news, but in the meantime, keep calm and stay Rusty. Cheerio.