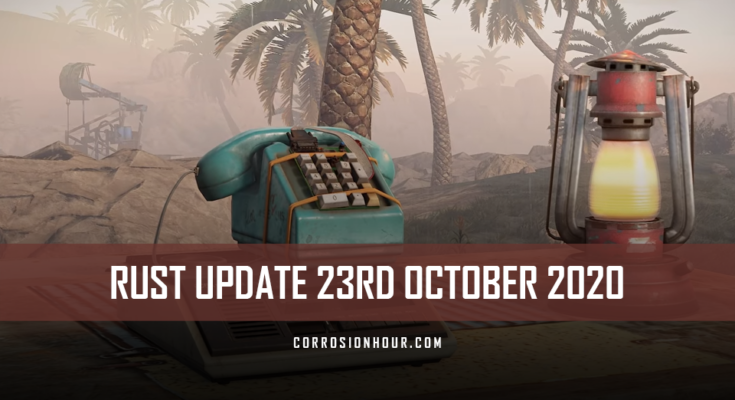 It’s almost Halloween, which means that spooky fun both new and old are on the horizon! As such, a mandatory patch will be released on Monday, October 26th at 3pm EST to enable the seasonal content. In addition to Halloween events from years past, expect new surprises including a new mummy wrap and ghost sheet costume!

As the headline suggests, phones have now wiggled their way into the game for an early view. It seems that they are not functioning quite yet, but this can and will change with each staging branch update. It appears that each phone is automatically assigned a phone number and will be registered in a directory to help players contact other players. Phones will be located at many monuments, perhaps so that you can call home to ask your base mates if they need anything while you’re out?

And, as promised earlier this month, the art assets from the discontinued HDRP branch have begun work to incorporate them into the game via the ‘HDRP_Art_backport’ branch.

Greetings survivors and friends, Shadowfrax here with your weekly ramble through the world of Rust development, and I’m a bit pressed for the old-time this week, so do forgive me if I rattle through, but you should still hopefully come out the other side with everything you need to know.

Right! First, there’s a mandatory patch on Monday 26th October at 3pm EST to add the usual seasonal content, which, apart from the expected change to the Rusty aesthetics, bonus bits and bobs, events, and angry NPCs, also includes the skull trophies and spikes I showed you last week (price on the store to be confirmed) and a couple of extra pieces of attire.. namely some mummy wrap underwear for your character, which for some reason thinks it’s a bikini…

And for the self-conscious among you, a holy sheet, aka ghost costume. See, I told you that was what all the work on cloth physics was leading up to, didn’t I? Perfect for hiding in amongst the dirty laundry (if that’s what you’re into), Wonder if we’ll ever get skins for it? Hmmm.. probably not.

Not sure on the exact details of how you’ll acquire this yet, although I’d guess it’ll be the same kind of thing as the barrel and crate costumes.

Another item that just merged in, but is yet to be fully functional, is this. A telephone, it’s an electrical item surprise surprise and get this, it will allow for players to actually talk to each other remotely! What a massive step up for the world of communication!

But, I hear you say, I’ve just worked out how to use Discord; what possible advantage could this give me? Well, Discord doesn’t generally encourage you to call other random users and breathe heavily at them, for one thing. I will phone you, and I will breathe heavily at you. Also, there will be phones located at several monuments because stopping to answer a ringing telephone in the middle of a loot hot spot is always a good idea.

It’s a work in progress, so definitely SUBJECT TO CHANGE right now; it doesn’t seem to work yet either, although there’s a directory, and each phone can be named but will automagically be assigned its own eight-digit number, it seems. You’ll also apparently be able to record conversations for some reason, and I’m told phones are actually just part of a wider body of work focusing on in-game voice and sound, so stay on the line, and I’ll keep you updated.

The TEAM added rainbows to the weather system, which is nice… I especially like how they flash on and off like some kind of leprechaun’s alarm system.

And elevators will now use five power at all times, instead of a standing charge when idle and more when in use.

In works in progress, The Hapis rescue attempt is still ongoing. No pics of progress on this yet, sadly. The work cart branch is looking very exciting, with the prospect of being able to travel around the island on rails at some point in the not too distant future.

A branch called HDRP_Art_Backport has sprung up to start moving these art assets over into the main branch as threatened. And lastly…

Uncle Helk seems to be up to something as he recently started working on another new branch, simply called ‘techtrees.’ Which doesn’t take a lot to figure out what it’s about in general, but the specifics of which I’ll hope to be able to bring you as soon as I find out. Leave me a comment down below.