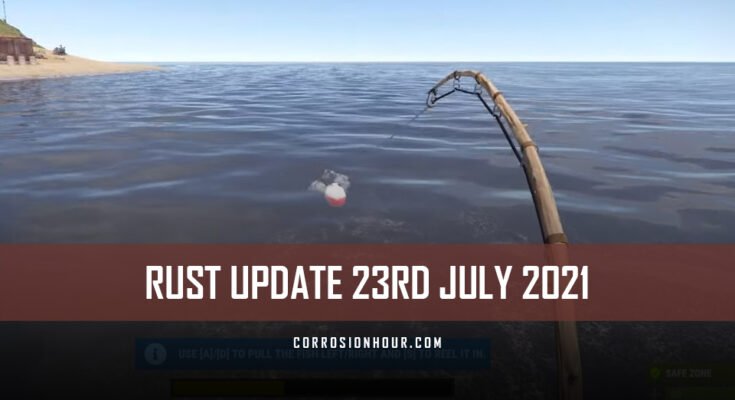 Does something smell fishy? That might be the new RUST fishing system! If you’ve grown tired of the fish trap system and feel like honing your angling skills, then you are in luck!

The system currently requires a fishing rod and bait to start fishing. Several fish varieties have been added to the game, and various items will become “fishable.” The system works pretty much like most fishing minigames that you’ve played; you cast, wait, wait some more, and if you get lucky and a fish bites, you can use ‘A’ or ‘D’ to pull the line left or right while pressing ‘S’ to reel it in. It also looks like using higher-quality bait will grant you a greater chance at hooking a more rare fish.

If progress keeps up, we could see fishing, submarines, and the underwater labs emerge in the next update on the 5th of August. This means we should get a chance to preview these new features on the staging branch sometime next week!

In other news, moving forward, all RUST Twitch drops will move to general for the final 24 hours of a drops campaign. Facepunch made this decision in the hopes that it relieves some of the stress on streamers and viewers, especially in the case of a hard-to-catch stream in a tough timezone.

Greetings, survivors and friends, Shadowfrax here with your weekly catch of Rusty news fish, wherein this episode I have for you the first actual footage of actual fishing in actual Rust.

I’ve got some Rust in spaaaaaaace, haha, but not really, unless.

And if you live in the UK, then I’ve got a giveaway for a rather sexy monitor you can enter in a bit; sorry, I would open it up to all of you lovely people, but shipping and all that jazz, you know.

First though, if you’re not ‘sub-scribed,’ it’d really help me if you did that right now!

Talking of subs!.. see what I did there, the Submarine update propels itself ever closer to us, hoping we won’t notice until it’s too late, but if you’ve been watching this channel, you’ll be prepared.

There will be three main new features to get used to soon. And they are:

Underwater labs; Somewhere to go with your wet car.

And fishing! Something which every survival game needs at a minimum, and I have no idea how Rust has got away without it for so long, literally unplayable.

But when you say! Well, how long is a piece of fishing line? I’ll tell you. According to the plan, if everything goes swimmingly and as long as nothing is SUBJECT TO CHANGE, this is all going live in the next forced whip on Thursday, 5th of August, and will probably be playable on the staging branch for a week beforehand.

Not 100% sure about sharks and spearguns yet, but from what I’m herring, it looks like the TEAM is Kraken on with things, and they could well be surfacing too.

So the new thing I have this week to show you is the progress on fishing. This is all still currently being hooked up, but as you’ll see, it’s mostly there now.

It seems you’ll need two things, a fishing rod, which has been sitting patiently in the game files for several years now, and some bait. You’ll be able to adjust your cast length by aiming up and down, and as long as you’ve picked a decent spot, preferably in a safe zone, you just need to wait for a bite.

You’ll be familiar with the next bit if you’ve played certain other fishing MINIGAMES. Naturally, your catch will fight you, and at the moment, it’s A and D to pull it left and right and S to reel it in. But of course, if you’re not careful, you’ll lose it. And the fish just ends up with a free meal.

It’s not just fish you’ll be catching either; as you can see, you might end up catching some tarp instead of a carp, some fins instead of something with fins, or a bucket instead of a mullet. Sorry, that last one wasn’t very good. I’m not sure as to the exact variety of stuff we’ll be able to retrieve from the deep, but some of the fish species mentioned so far include.

Also, better bait will give a higher chance of catching rare fish. I don’t know exactly what we’ll be using, though, whether that ends up being standard food or specialized stuff that you’ll need to cross a bandit’s palm with scrap for, but I’ll tell you as soon as I find out.

In the meantime, let minnow what you think of fishing in the comments below.

Yet another thing to put in a pie, though, eh? So many ingredients. And still no tier 2 cooking.

I hope you’re looking forward to subs as much as I am! I’m just ‘so excited’.. no more floundering around in a wetsuit soon–as long as you can afford the luxury. As mentioned last week, we’ll be able to purchase them from fishing villages. And although I don’t have the price structure yet, you’ll be glad to know they will at least come with 50 fuel.

There are no periscopes planned as far as I know, but we do know there will be torpedoes. And here is what they’ll look like. I must say Tom has done a top job on Laurel & Hardy as I’m calling them for now, although I’m not sure what the exact difference will be when it comes to the fillings. You can also see here the animation on little Hardy. Look at him go.

Slightly reminiscent of Fallout, I think. What about you?

Last week I showed you some visuals on the underwater labs, which will, of course, be your main motivation to overcoming that crippling thalassophobia.

As mentioned, unlike surface monuments, they’ll be procedurally generated. They’ll also have multiple levels and will allow for submarine docking via a moon pool. There are a ton of commits this week relating to set dressing for these, including control chairs, shelving, and steel toilets. Ooh, la la.

Alistair also got me going a bit with this footage. Which sadly isn’t foreshadowing for some kind of space station. But rather buoyancy gone wrong. Shame, Rust in space could be interesting. Don’t worry; the interiors of underwater labs won’t really act like this. I hope.

In other news, it looks like the water itself will be getting a bit of a tweak. With visibility behaving differently depending on the depth and things looking brighter and slightly more turquoise.

In addition to the electrical QOL changes I mentioned last week, you’ll no longer be able to pick up boom boxes without TC auth. A case was fixed where connected speakers would play audio even if they weren’t powered, and some more internet stations were added.

And for those of you concerned about missing out on free stuff. Going forward, all streamer-specific Twitch drops will be moved to general drops for the last 24 hours of each campaign. SUBJECT TO CHANGE, of course. Tell me what you think of this below; why not.

Right! Talking of free stuff, attention UK people, the smashing chaps at AWD-IT who power my content, are going to be giving away one of their awesome new 1440p 165Hz, 27″ RGB monitors to one of you. And you’ll find the link to the giveaway page in the pinned comment and description. The winner will be notified by email when the giveaway ends, and you will need to reply to claim, so keep an eye on all your folders. Sorry, but because of the shipping costs for large items and many other things, this is UK-specific but stay tuned as I will have more far-reaching giveaways in the future.

Please leave a like and sub to the channel if you appreciated this vid, follow me on Twitch for streams, Twitter, Facebook, Discord, and my steeeeam group to stay in the loop on my content, and you can support the channel directly through Patreon or by grabbing some of my merch. I shall catch you all soon, but in the meantime, keep calm and stay Rusty, Cheerio.