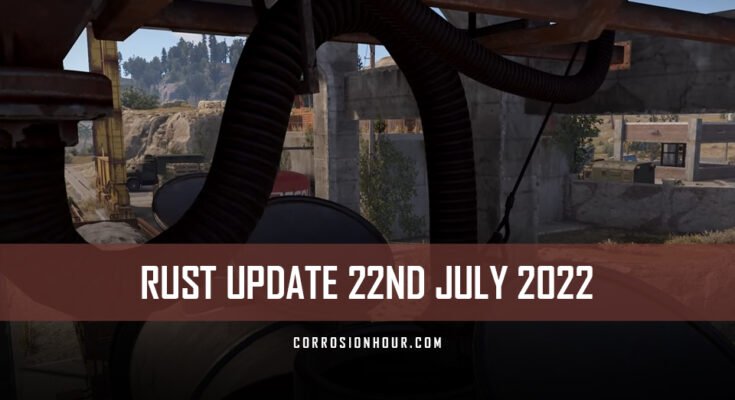 A loot wagon and a fuel wagon will spawn at currently unknown locations, in which players can opt to shunt them into the Trainyard to have the coaling tower assist in harvesting the loot from the wagons. Players will need a green card and fuse to access the coaling tower control room to initiate the event that will either reveal loot crates in the loot wagon or process fuel from the fuel wagon. Loot tables and amounts are still likely to change before release on the August update.

Greetings, survivors and friends; Shadowfrax here again, and today do I have a treat for you! It’s only an exclusive first look around the new trainyard monument rework. And what am I asking in return? Only a quick press of the subscribe and like buttons.

Anyway, I was a bit concerned there wouldn’t be much news this week. But then, like Gandalf popping his head over the hill on the fifth day, I was suddenly able to give this little beauty a try for you, and the good news is you’ll be able to test it soon, too—details in the description.

So, if you’ve been paying attention, you’ll know that the trainyard is getting reworked slightly, with a new section that includes an event, and it’s finally linking up to the rest of the rail network. Oh, the realism! Also, on this branch, there are new light switches on monuments and new locomotives.

First, you’ll notice the layout of the trainyard is almost identical to before, as this side-by-side shows. But there are two very important changes, here and here. Firstly, the main line running through will now be linked up to the rail network, as you can see on the map.

Other monuments will eventually link up in the same way, but one thing at a time, eh? There’s also a new locomotive in town, but I’ll get to that in a moment.

A new “Cobalt Logistics” coaling tower is the main addition to the trainyard (remember there was a naming competition? Well done if this was yours), and this straddles the main line. Everything I’m showing you is, of course, deeply SUBJECT TO CHANGE.. so don’t jump to final conclusions, but here’s a rough summary of how it works at the moment.

It appears two types of lootable wagons will be spawning in the world; not sure where yet. One that contains loot and one that has fuel. You won’t be able to get at the contents, though, unless you bring them here.

You’ll need to use a workcart, or one of these – a new locomotive model, and as far as I’m aware, the difference in the future will be that the workcart will be a lot slower at pulling laden wagons and will be less powerful in general I think.

Also, the loco has twice the health right now; not sure yet where these will spawn. Oh yes, and both workcarts and locos have horns now. Left click.

Anyway, simply pull up with your loot wagon or wagons from either direction until you are in position as indicated on the dash. Then you’ll need a green keycard and a fuse to unload. At the console in the tower, you can automagically switch between multiple wagons and remove the contents.

In the case of a loot wagon, the vacuum will suck out all the coal (which just disappears into the aether, sadly), and this will reveal the lovely, lovely loot. For you to loot. Shame we haven’t worked out how to use coal yet; we are rather undersubscribed on it.

And in the case of the fuel one, you’ll find said fuel deposited in the tank inside the tower. Loot tables and quantities are, of course, all SUBJECT TO CHANGE.

Also, on this branch, you’ll find lighting! First, on workcarts and locomotives on the front and back to show if one is traveling towards you, away, or is just stationary.

Then there’s monument lighting which the TEAM has been working on quite a bit over the last few weeks. So now you’ll find that most monuments have a few switches around which you can use to illuminate and unilluminate them.

Or even just leave them on constantly if you want a reminder of the days when you didn’t need to worry about such things. Although actually, I just checked, and they will turn themselves off after a while; how energy conscious.

Oh, and there are also some new basic wagon models now. Nice. Although these might not be merged in for a while, so I’m told. Everything else I’ve shown you here can be tested right now on the Aux02 branch, which can be opted into on the staging client. Of course, you’ll need a corresponding server to join that branch. But one or two should pop up soon. I’ll put the destructions in the description.

After that, these changes are planned to merge onto the normal staging branch on the 28th of July, and then all being well, it’ll be accessible for everyone on the release branch when the next patch rolls around on August 4th.

Now I want to know what you think of these changes, so please leave me your best comment down below, and I’ll try to read them all. Don’t forget to thumbs up and sub, and ring the notification bell.

Follow me on Twitch, Twitter, Facebook, Discord, and my Steeeem group to stay in the loop with me, and consider supporting the channel on Patreon, with a Youtube membership, or on my merch store. Links are all below; I shall catch you soon, but in the meantime, keep calm and stay Rusty.