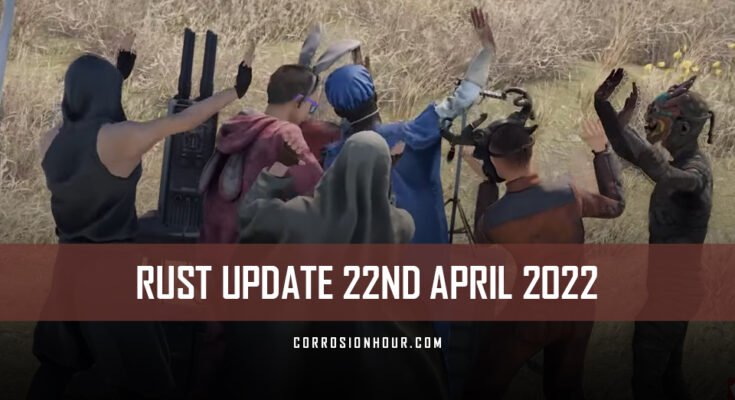 We’re halfway through the wipe, and hopefully, everyone had a chance to participate in the egg hunt event on their favorite servers. As an extra treat, here’s some news from beyond the staging branch.

A first look at the RUST clan system

An early version of the clan system is now available on the pre-release staging branch. At this stage in development, a clan can only be created by a server owner for testing purposes. However, it’s intended that anyone can make a clan if they wish.

The current early version boasts a custom UI with a relatively robust features offering. The clan can set a crest of sorts, post announcements, manage members and ranks, and keep a log of member activity. The settings tab will allow for creating a custom logo for the clan. No word yet on whether or not this logo will be visible in-game anywhere or if functionality to upload a graphic as the logo will be a possibility.

It seems the intended purpose of the clan system is to work alongside the nexus system, which will allow players to travel between servers in a network of linked servers. This system would create a communication hub for members to use even if spread out among the different servers. It also seems that the clan system affords the same advantages as the team system, but it is still unknown if it will override the team system in its final version.

Server owners running a pre-staging branch server can test this feature out by entering sv clan.create followed by the clan name into the console. Then, once the clan has been created, press ‘J’ to bring up the clan screen and begin exploring.

Greetings, survivors and friends; Shadowfrax here with all that’s new from the Rusty world. And although news has been slightly slow the last couple of weeks, I’ve got some important info about clans for you! And I know you LOVE that word.

So right now, on the aux pre-staging branch, a very early version of the new clan system is being tested. Anyone will be able to make a clan, but at the moment, as it’s being tested, only server owners can with ‘sv clan.create’ followed by the name of the clan in the console, and then pressing J in-game will open up the clan UI.

From here, you can make announcements and manage members, invites, and ranks, which seems just to be leader, officer, and member at the moment. An internal log will be for joinings and promotions, And settings where you can create a rudimentary banner and logo, which may or may not be used outside of the UI.. possibilities are being explored on this.

The clan system will be a lot like the current TEAM system, but much is still up in the air and SUBJECT TO CHANGE, so don’t take anything I say here as ultimate truth.

The purpose of creating such a system is to work alongside the upcoming Nexus system, which, as you may remember, will allow groups of servers to be joined together and migrated between.

A clan would therefore be like a team that could transcend an individual server, meaning members could retain their affiliation with the group regardless of which one they were on. I believe it will also be integrated into the Rust+ app, although everything will be possible to organize in-game.

At the moment, the clan system doesn’t completely override the team system, and as to which direction it takes, that’s a work in progress. It seems, at the moment, it will give you the same advantages as the team system, too, such as map markers and visual indicators, including which clan a player is in displayed under their nameplate.

I’m sure, like me, you’ve got a lot of questions about this, and a number of them will have to wait as details are hammered out. What sort of control will server owners have over limiting an individual clan’s presence on their server or servers? Will it be possible to opt-out of it completely?

It seems that community responsibility for cheaters should work in the same way regardless of group size and that an entire clan will be bannable if needed. Will the creation of a transcendent hard-coded clan system lead to huge organized zerg syndicates that will terrorize the Rust multiverse? Hopefully not.

It looks like the introduction of this system in its final form is still months away, though, from what I’m told, so you have plenty of time to stew over this, and I’m sure there will be many twists and turns. Hey, perhaps a solo player’s clan will form out of this, and solos can finally unite as long as they agree to do so separately.

Let me know exactly what you think of all this in the comments, really looking forward to reading all of these, and I will, of course, keep you informed as this one morphs and changes.

Elsewhere, optimizations are being worked on. I seem to remember hearing something mentioned about FPS recently, so that’s probably why. At the moment, these are focused on generally reducing garbage collections and improving the overall average fps.

Talking of which, as you can read on the community update for this month, a previous-month beta branch has been introduced, which you can opt into on steam, and this is to help creators finalize content from the previous patch update, just in case they need that bit extra time. Time! Don’t talk to me about time!

Although Note: the branch currently features this month’s April update in preparation for next month’s patch.

In other news, ziplines are getting various tweaks, mainly around how they are generated. Plus, some new dismount points are being added to monuments, such as the lighthouses, sphere tank, sewer branch, and stables.

In works in progress, the rail network is being fleshed out—nothing to see here yet, though. Hapis is rumbling along as always. There are improved images for animals on the death screen, for instance, if you get killed by a chicken. Awkward.

And there’s a new branch called HMLMG, and I’m sure you can probably figure out what that’s about without too much help.

Leave a like, sub to the channel, ring my bell, follow me on Twitch, Twitter, Facebook, Discord, and my Steeeeam group. You can support me directly if you wish with Patreon, youtube channel memberships, or via my merch store; links are all below.