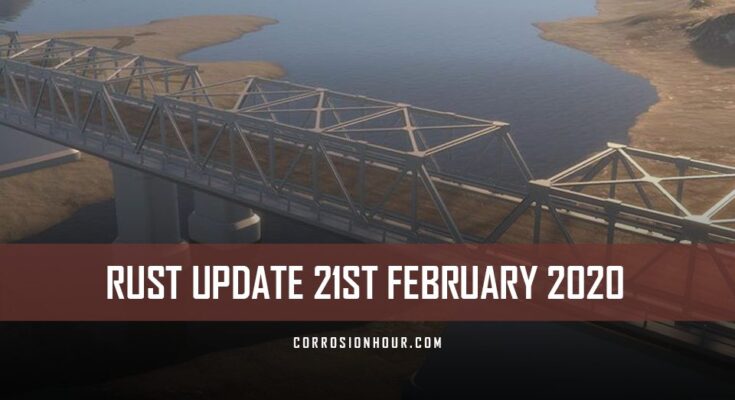 Greetings survivors and friends, Shadowfrax here once again with your weekly boatload of Rusty development fish and today I have news for you on sea levels, poo and BRIDGES.

Make sure to hammer the subscribe button and chainsaw the notification bell in half to stay up to date on Rust news and more every week if YouTube decides to send you my videos.

As well as plenty of things still going on behind the scenes, this week we’ve seen a number of changes to map generation and quite a few fixes.

Firstly, the default size for maps has been increased from 4000 to 4250 to give monuments more space to express themselves properly now that we have a ring road system.

Also small monuments such as the stations, warehouses and spermkets will be able to spawn on both the ring road AND side roads leading to large monuments.

Although large monuments will be given spawning priority when generating maps.. The ring road will also now be removed from any maps under 4K in size.

On Wednesday this week a small client and server update was pushed to address clients freezing and or crashing after joining a server. And this should also have fixed a problem with melee hit detection that many of you were having.

Other fixes, currently only on staging, but which you’ll be able to enjoy the benefits of after the next monthly patch to main on the 5th of March, include:

A fix for placement issues with small and medium wooden signs, the cargo ship not sometimes spawning out of bounds and killing all the scientists on board… and finally, something that cave dwellers amongst you can rejoice over.

Shotgun turrets placed below the waterline will now be able to actually do their job instead of firing blanks.. Praise be!

Oh and hide ponchos will now take only 30 seconds to craft instead of 60.. This update just keeps getting better.

For those of you interested in the cinematic side of things (and that definitely includes me, and if you want proof just check out my latest cinematic, link on the screen about now plus down below, plug plug plug..)

There’s a whole studio full of convars and cinematic tools working their way down the rusty pipeline towards you.

These include player animation settings, such as controlling the speed of animations.

Being able to print out a list of saved camera positions, and names of all players in the current demo.

Better demo playback, including a HUD for demos which can be toggled.

Some camera fixes for low lerp values, FOV and camera shake for the debug camera.

The ability to turn off the underwater effect, and most exciting of all, at least for me.. being able to parent the debug camera to an entity allowing us to orbit it freely.

Ok I understand a lot of you may have had a whoosh moment with all of that, but trust me it’s a big deal when it comes to creating content.. If you’re interested in knowing more then check out the video description where I’ll put details of what I have on these new commands.

In works in progress, the new update to farming is being cultivated constantly and from the commits we can tell a few things.. firstly, there’s some sort of electrical sensor being worked on for planters, which I’m speculating will be used as an automagic switch for the new sprinkler system.. you’ll be able to remove dying plants for mulch, which can then be composted for fertiliser.

And in an interesting commit from this Wednesday, a typo was fixed that was making horses poo every 10 minutes. Thank crunchy for that.. I wasn’t getting anything done.. But seriously this is the first time something like this has been floated and I’ve often speculated about the results of mixing Rust and Poo.. apart from.. Rust coloured poo.. Which you might want to get checked out.

This is happening on a separate branch at the moment.. so don’t go hanging around a horse’s backside waiting for something magical to happen.. but it does open up some big questions.. will it just be horses? Can we throw it? Will we be able to throw our own? how many people will accuse the team of copying Ark this week? Please deposit your own questions and observations down below.

Foliage optimisation is still ongoing as mentioned last week, not quite sure yet what this will do for us performance-wise but I’m hoping to get more info on that soon.

And an interesting convar popped up in the commits this week, that’s not usable yet.. But when it is I can imagine all sorts of shenanigans occurring.. A convar that lets server admins change the water height.

Are you thinking what I’m thinking? I mean I’ve heard rumblings in the past about dynamic water height and I don’t know what’s planned for the actual game.. maybe low and high tides? Or something else.. Either way, you might want to think twice about annoying admins after this goes live… Let me know your thoughts and ideas down below.

And lastly! Over on Facepunch’s Instagram.. a tantalising glimpse of a new monument possibly, or maybe just a new element for the road system.

A couple of bridges are being created, one concrete and one steel.. they’re currently only in the greybox stage so no indication of what they’ll look like when completed, or when that will be.. perhaps they’ll allow for an expansion of the road network so that it can be used on more varied maps.. who knows at this point, but please stay tuned to the channel and I’ll tell you all the details when I get them.

Join me on Twitch where I stream three times a week, link down below, plus support my efforts here on Patreon and stay up to date with my content on Twitter, Facebook, Discord and my Steeeeeam group and I shall catch you all soon, but in the meantime, keep calm and Stay Rusty. Cheerio.