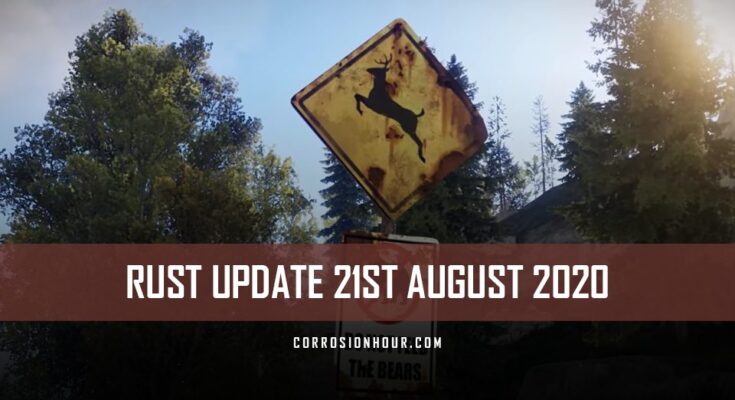 This week in RUST development, we get a peek into the future of road signs on RUST island and what Facepunch has planned for them. Not only has there been progress into transforming them into destroy-able objects, but it also seems that we will be harvesting them soon as well! And their culling distance is also getting an increase in hopes of saving more players from driving their cars straight into them.

Speaking of modular cars, normal and armored cockpits are getting windscreens added in to help protect the driver from forward assault whilst driving. These windscreens will break down at specific damage intervals to impede the driver’s view for the trade-off of protection of the face. Big thanks!

But perhaps the most exciting and mysterious goings-on is that of the new “weather2” branch that has surfaced. Could we be seeing the return of rain? Perhaps snow and sand storms? Hopefully, we’ll know soon!

Greetings survivors and friends, Shadowfrax here with what’s happening in Rust development this week, where we have a couple of new works in progress, and some words on optimization.

But first! You know road signs? And you how they add to the immersion? Even though their placement usually makes less sense than an inflatable voodoo doll. Also, you know they’re indestructible, right? Well, not for long as the first steps are being made to allow us to destroy and harvest them. Which probably means they’ll give us cloth or something. More on this when it happens.

Also related to this, roadsigns have had their culling distance increased to 75 meters to prevent players in fast-moving vehicles from wrapping themselves around them because they popped into existence at the last moment.

Talking of which, now on Staging, cars have had an important upgrade. Normal and armored cockpits now have windscreens, which protect the driver from frontal assaults and break after 90 and 280 damage has been done to the cockpit respectively. There are no side windows here, but it should impact anyone trying to have a crack at attacking you as you’re driving towards them. How dare they!

There are a few optimization efforts going on at the moment that might make you feel a bit better. There’s a branch called animator optimization, although I’m not sure of the details on this one yet. Hopefully will be able to explain it for you soon.

However, another body of work that’s been going on for a while is gib pooling. And what’s that? Well, a lot of objects in Rust are pooled, which is basically a way to disable and enable them from a common pot, instead of creating them from scratch each time and then destroying them afterward, which obviously costs more to do. Gibs, the little bits that things break into when you destroy them, weren’t pooled until now, so this has been fixed.

This should make a big difference in some cases as instead of making say, 30 little physics objects in one go when something gets knackered, some already disabled ones can be reused.

Not only this, but another big thing that was changed was the shape of physics objects. Instead of using the mesh as a collider, they’re now using simple shapes like boxes, capsules, and spheres when possible.

This is faster for the physics system to process and a lot of the meshes weren’t really designed to be physics objects anyway. Plus, if just simple shapes can be used, the physics mesh doesn’t even need to be stored in memory, which is another saving. Take this bit of twig wall as an example, instead of a mesh that matched its appearance, it now uses a box. This means it moves a bit differently, but it’s hard to tell in motion.

So what you say, I’m not interested in all this. Get to the point, get on with it. Well, to give some idea of how this has helped, destroying a water barrel used to take around 1.7ms, now it only takes .58ms and uses 90% less memory. What a savings. All of this stuff adds up as we’ve seen lately. And the TEAM continue to chip away at performance wherever they can.

In other news, servers you have direct-connected to in the console should be correctly added to your server history as of next forced wipe, and in works in progress, improvements to AI and NPC brains are being made on a separate branch, although this is just experimental at the moment.

The boat shop monument continues to be worked on, but sadly, I don’t have any new visuals yet. Still, much work is happening with HDRP too.

But perhaps the commit of the week award has to go to this one. Yes, it looks like work has just begun on a branch called weather2. It’s a bit early to forecast exactly what this’ll include as there snow knowing exactly what’s planned at this stage. In fact, I haven’t the foggiest, but why not tell me what sort of weather you’d like to see in Rust in the comments below.

Leave a like and sub to my channel if you enjoyed today’s vid. Join me on Twitch for streams and Twitter, Facebook, Discord, and my Steeeam group to stay up to date with my content, links below. Thank you to my amazing patrons for their support, and I shall catch you all soon, but in the meantime, keep calm and stay Rusty, cheerio.

The Forest: How to Upgrade Weapons