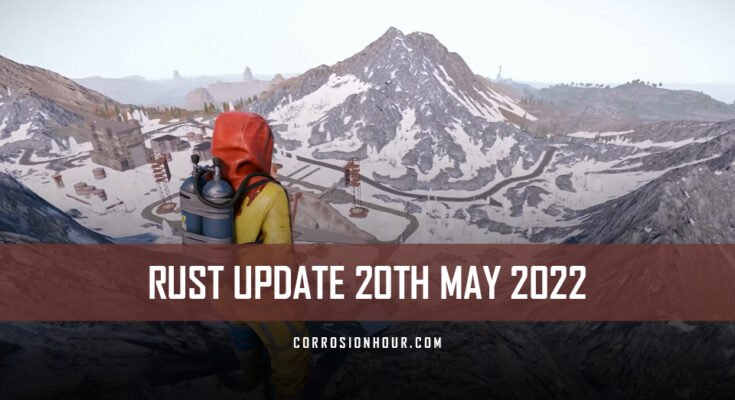 After a year of not so patiently waiting and much asking of ‘when Hapis?’, the answer is finally: now Hapis! The newly made-over revamp features the HDRP art assets that procedurally-generated maps have been using for the past year, plus some updates to wiggle in some newer content.

The map’s features are, by and large, the same or as similar to the previous version as the newer art assets could get. Monuments are in their expected locations, along with newer monuments like fishing villages, oilrigs, and the ranch. The island’s shape remains mostly the same, as does the biome layout, with some subtle modifications to enable (encourage?) specific kinds of gameplay.

Anyone interested in trying out the new and improved Hapis can do so by loading into a staging branch server running the map. Expect many updates to the map in the coming weeks in preparation for the June 2nd update, and be sure to provide feedback that helps the team smooth out any balance issues or bugs.

In other news, the newrecoil branch has been plugging away this past week with a new, custom crosshair, directional damage indicators, and updated hit markers. More on this as the commits reveal new developments.

Greetings, survivors and friends; Shadow here with your regular rusty development newsflash, and first as threatened, Hapis island is back on the Staging branch now for public testing and bug fixing.

I’m not going to give you a blow-by-blow detailed look at it here; that would take too long. Besides, you should be able to find a server running it on that branch now anyway if you want to take a tour yourself.

Suffice to say; it’s pretty similar to what you were used to; there’s nothing too distressingly different. Many of the familiar monuments are where they were, such as the launch site, sites A and B, the loading dock, and various others. And the island’s shape and layout remain almost the same. The biggest thing and main reason for its absence for so long is, of course, an update to include all the new textures and meshes from the graphical overhaul just over a year ago.

Looking at the map, it seems that the snowy area has been reduced slightly; there are some changes to the islands, especially in the Southwest, and a much larger desert area. The oasis is still here, but the canyon is gone completely, and now there’s a large barren blob of desert nothingness surrounding a new Sphere tank. So a likely spot for larger bases, I’m sure.

There are a couple of fishing villages and a ranch now. Both oil rigs [are present], with the small one being actually right on the beach of one of the new islands. Interesting move. And I’m noticing lots of little extra features and sneaky eggs here and there.. which, as I say, I don’t have time to show in detail today.

The waterfall is still here, but upsettingly the cave behind it isn’t. Yet, sad face. But fortunately, I can report that the crashed plane is still present and does contain a bit of loot.

I am obliged to say: this is all still SUBJECT TO CHANGE. Well, I’m not really obliged, but it’s probably for the best. And you should expect small tweaks and balancing shifts as time goes by, as well as larger additions in the long term. For instance, there are no desert bases or underwater labs at the moment, There are no ziplines, no Bradley at launch, and possibly at some point, trains will be added in some form, but there are none at the moment.

Anyway, let me know what you think of this rather big development, I guess for many people, down below, and you should see the map making a return to the main branch of the game in the next big patch on June 2nd.

In other news, the new recoil stuff is still being plugged away at, with hit markers, directional indicators, and crosshairs being mentioned in the commits—no clue when you’ll be able to play around with it yet, though.

The Nexus and clans systems are being heavily worked on still so that you’ll be able to manage a TEAM across multiple joined servers whenever that finally happens.

There are many commits regarding adding AI patrols to the launch site, as mentioned last week. Not sure if this is coming in next month’s patch just yet.

Train control panels have been updated on staging to not only match in better with the above-ground models but also the display indicates how many segments long your train currently is and flashes when a new bit is added.

Some work was carried out this week on vehicle parenting to let you transport things like minicopters etc., on the wagons without them sliding off. This also was extended to let you carry other vehicles on flatbeds and in the backs of scrap helis, but there are some issues to sort out with velocities when entering and leaving the triggers, so this has been put on the back burner for now, although it does seem that you can carry rowboats in scrap helis a bit better now without them flipping out too much. Super handy, if you can get them in there, of course. Now we just need retractable access ramps. However, research has shown that cars are still a definite no-no.

Well, that is about it for this week, but leave me your thoughts below, sub to the channel, and leave a like if you appreciated it. I’m on Twitch for your live viewing pleasure, and you can follow me on Twitter, Facebook, Discord, and my Steeeam group, too.

Don’t forget, if you want to support me directly, you can do so through Youtube memberships, Patreon, or via my merch store; links are all below. I shall catch you all very soon, but in the meantime, keep calm and stay Rusty. Cheerio.