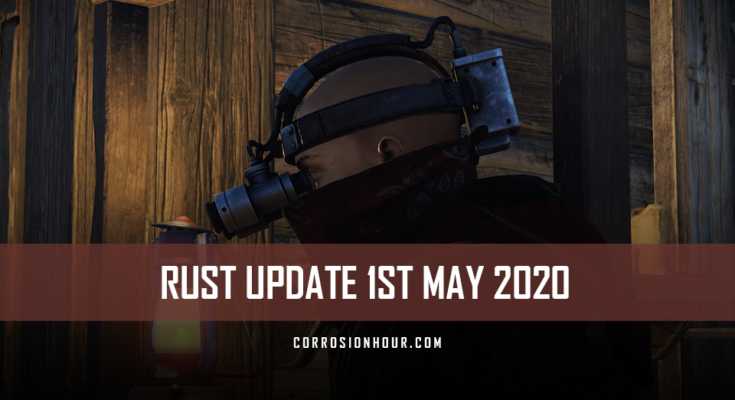 In this latest RUST update video, we see a long-awaited update that challenges the status quo of RUST’s pitch-black nights. It appears with a mere 250 scrap and a quick run to the local bandit camp, players will now be able to acquire wearable night vision goggles. Amongst this game-changer, here are the topics Shadowfrax covers in more depth in his video:

Greetings survivors and friends, Shadowfrax here with your weekly update. And you know I literally get hundreds, maybe thousands of messages every day from you lot saying ‘look, I can understand the TEAM wanting to work on optimization all the time because after all, it is the most enjoyable aspect of development, but what we really want is more content’ because of course, I have the power to do something about that.

Well whatevs, you can stop right there because I’m about to fire five new bits of content at you in rapid succession, so hold onto something.

Firstly, because we all love a bit of realism until it affects us personally, night time on an island in the middle of nowhere hasn’t exactly cracked up to be what everyone enjoys. Oddly enough. Well, now, as long as you have 250 spare scrap and a level 2 workbench at your disposal, and who doesn’t? That’s no longer a valid excuse to be a nocturnal self isolator.

Now, on staging branch, you can buy a pair of these chaps from your local bandits, or after spending 125 scrap to research they can be crafted for 10 high qual and a couple of tech trash each.

In the same way as diving tanks, they start off with a charge, which lasts about 900 seconds. You can toggle them on and off with F, and when they run out, you can refill them at a level 2 or above workbench. However, because ‘rechargeable batteries’.. their maximum charge level is reduced a bit every time you do so.

As well as lensing themselves to some good old tactical node harvesting. They could I guess be used to I dunno, see other players. Just be careful whom you creep up on to surprise though, as there is a trade-off. You can’t wear anything else on your head with them. Not even bunny ears, and they don’t offer a massive amount of protection compared to other hats.

Something that a few of you asked me to scope out for you in this video is how they are affected by various light sources, so here we go..

I look forward to reading your comments about how unfair this all is now that zergs can find you at any time, just remember that you also complained for years about not being able to see in the dark.

Our second new item this week is an attempt to fix another problem, namely, ‘Who’s bright idea was it to build in the arctic biome?’ The electric heater is the latest gadget to grace the staging branch, which can be placed on walls, uses a very eco-friendly three electricity to power, and kicks out enough heat in a radius to make your cheeks rosy, all four of them if you’re a fresh spawn.

It’s a level 1 workbench item that costs 200 frags to craft, and at the moment, the research costs are a very affordable 500 scrap.. although like everything else I’m mentioning it’s SUBJECT TO CHANGE before the update to main on 7th of May.

The next three new items are all water-based, firstly a fluid combiner, which I’d be seriously worried if I had to explain to you. This costs five high qual to craft at a level 1 workbench.

There’s a water pump, which costs 500 wood and 200 frags at a level 2, and can be placed in a water source, either fresh or salty, and must be powered of course.

And to go along with that if you are wanting to make use of the brine. A powered water purifier which needs five high qual, 15 frags, and 20 cloth to craft and is pretty much it’s own explanation. You have two barrels, stick seawater in one, and it will gradually filter into the other. The question being, of course, where does the salt go? Into the minds and hearts of players.

There were a few tweaks and fixes this week on staging, oil refineries can be repaired, and there were a number of changes to monuments to cut off many shortcuts and make things a little trickier.

These include hackable crates at both oil rigs now being behind red key card doors. Keycard spawns on the large oil rig having been removed. Various sheet metal coverings being added to block off shortcuts to keycards at the harbors, power plant, train yard, and treatment plant, more SAMs at the launch site, and an extra sentry at the compound to protect the recycler. Also, there was a reduction to the number of times a red key card can be used.

For cinematic nerds, there were some extra commands added to make demo recordings easier to manage, and instead of going through them all here, I’ll stick the details in the description for you to look at if that sort of thing interests you.

Also, targeting an entity in debug camera no longer uses F, but will now be a bindable command. Again, details of how to do this will be in the description.

In works in progress, all the usual stuff is still going on in the background. Although this week, it’s interesting to see that finally, we can expect to get an update to animal models, with new boar, wolf, and stag art being worked on it seems.

And lastly, last week, I mentioned a mixing table, and although the TEAM are still being tight-lipped about it, from the commits, it seems that one use will involve tea recipes, along with mention of modifier buffs? As an Englishman, of course, this is of definite interest to me, but what varieties will we be able to mix? burlapsang suchong? Gunpowder? Zergamot maybe? Stay tuned, and I’ll give you all the exciting details as soon as I get them.

Join me on Twitch, where I stream stuff every week.

Link below. Keep up to date with my uploads and thoughts on Twitter, Facebook, Discord, and my Steeeeam group and support me on Patreon if you are able to at this time. I shall catch you all soon, but in the meantime, keep calm and stay Rusty, cheerio.