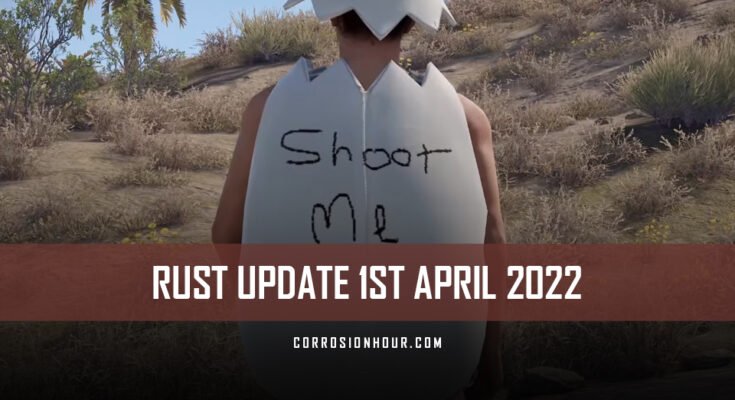 There’s only a week to go until the next monthly RUST update and no, this isn’t a joke!

The rail network is now on staging, which means that we can expect to see it in some form in the forced update on April 7th. It’s not likely that it will come with the new engine and carriages, as they are still being worked on in a separate branch. We’ll have to wait and see. Those server owners and admins who wish to can easily spawn in workcarts for their players to use in the mean time and if they so choose.

It’s finally spring and that means that it’s time to get our egg vision back on! New to this year’s RUST Easter event content is the Egg Suit–a rather unique-looking costume with an interesting feature. Players who acquire this egg suit will have the opportunity to draw on it, much like a sign. How much it can be decorated and what limitations there are is still subject to change. Additionally, how this item will be distributed is also unknown, whether it’ll be available via chocolate eggs, like the Bunny Costume, or if it’ll be a temporary item on the item store. Only time will tell.

Greetings, survivors and friends; Shadowfrax here with all your latest Rust development news as we lurch uncontrollably towards next week’s big patch on the 7th.

First of all, though, get thyself over to the sub button and press it all the way in, and give the bell a tinkle too to join the ring-a-ding-ding club while you’re at it.

So the rail network is now on the Staging branch and is planned to start generating on all good procedural maps this month, over a certain size, of course. Presently a map needs to be over 4250 in size because the network needs the room. I know how it feels. At first, it won’t include any trains, although friendly server owners can quite easily spawn a workcart onto it for you.

The trainlines are very much SUBJECT TO CHANGE and will eventually include two-way traffic, stations, sidings, etc., etc. Plus, as mentioned last week, it will be using a new train model that’s being worked on by the TEAM as I speak, And there are a couple of new toys that can currently be spawned in to give us an idea, namely ‘trainenginetemp,’ and carriage, and these are very rough Roblox items not indicative of any final models and are just for testing purposes of course.

The train engine works just the same as a work cart but longer, and the carriages have a couple of mount points. But I wouldn’t take any of this as final.

According to the commits, you’ll be able to couple and uncouple these, it seems, but how long we will be able to make a train is anyone’s guess at the moment. No doubt this’ll be something we’ll be able to gauge better in time.

As the thumbnail shows, a couple of other new items have crept onto the staging branch, too. First up, some dog tags, which, no, don’t have anything to do with the pets branch but rather seem to be event-related. No word on what that event is yet, but feel free to guess in the comments.

Oh, hi Grammar Horse, how are you?

Oh, fine, thanks; I just noticed that the red dog tags say they’re blue dog tags. I wonder if that’s some kind of undercover thing?

Nah, I think you’re barking up the wrong tree there; I’m sure they’ll fix that soon.

Also, in keeping with the gritty realism of Fortnite, I mean Rust. This abomination looks like it’ll be making its way onto the store next week to tie in with the usual seasonal tat, although no idea how much you’ll have to shell out for it yet.

One interesting feature is that you’ll be able to paint on it, although clearly, this is a work in progress at the moment, and results may vary.

I would love to be able to paint on other items of clothing etc.; you could save a fortune on skins if you were good enough.

The ziplines have been adjusted somewhat since last week. There’s a change to the wording when going to mount one. And it now takes 3 seconds to get to top speed, which will end up being slightly faster than before when you reach it.

Lines will be able to pass through multiple destination points to enable you to travel further without having to climb up to new platforms. At least that’s how I read it, and some changes are being made to prevent players from getting dismounted and killed accidentally by the terrain in certain edge cases.

Work continues on the lighting/darkening of various monuments, with the excavator, stables, arctic bases, and fishing villages currently getting the treatment.

Wet, cold, and starving status info should no longer be blocked by helmets. The graphics quality should default to good rather than super potato on your first install, which will be a big bonus, especially for people who need to reinstall the game on a regular basis.

Some new achievements have appeared, probably what all the extra server analytic work has been leading up to.

There’s more work in progress on pets, Hapis, and no, there’s nothing new to say on the recoil changes apart from the fact it’s being worked on and won’t be in this next patch.

Right, that’s your lot! Let me know your thoughts below. Follow me on Twitch for streams, Twitter, Facebook, Discord, and my Steeeam group for updates, and you can support me directly through Patreon, channel memberships, or via my merch store; links are all below.