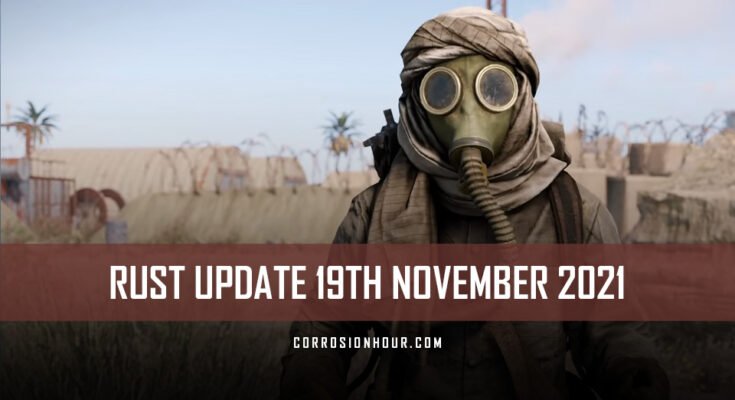 The sneaky, mandatory November 18th update dropped in a new way to purchase items in RUST. After a mysterious tweet on the 15th alerting everyone to the mandatory client and server updates, a lot of speculation and anxiety cropped up over what it all means. No worries, it’s just another store tab for buying things. Rather than placing special items in the weekly skin rotation or in DLC, Facepunch has introduced the “General” tab in the item store to place neat items that would be made available longer term. These items would not be tradable, but regular weekly skins would remain tradable. You just have longer to decide whether or not to get that coconut bikini.

And if you didn’t get enough skin excitement from Thursday’s update, be sure to check out the Charitable RUST event this year as they raise funds for charity. There will be 4 exclusive skins to purchase on the item store, proceeds which go to charity, as well as skins to earn from the Twitch drops campaign that will begin Saturday, 1pm EST / 10am PST.

Hello? What’s this sneaky mandatory update?.. Facepunch presents? It sounds like something pretty big is about to happen. I wonder what it could be? A new game mode?.. I like the sand storm. I wish we could have proper sand storms. I mean, that was something they were planning a long time ago in CONCEPT LIMBO. Wow, nomad? Oh no, it’s just a new hazzy skin.

Greetings, survivors and friends. Shadowfrax here with your mandatory weekly update video where today we have some interesting developments, and I think a couple of things that need to be made a bit clearer because I see one or two people getting their hazmats in a twist.

“Ugg, I not know what you mean; Scarecrow not wear hazmat..”

So the reason for this sneaky mid-month mandatory update wossname was not just to add a new hazzy skin, which btw is very nice indeed. But to introduce a new permanent item store. So what’s that, and what does it mean for you?

And please, I know that survival in Rust involves being the first person to jump to a conclusion, but just try to switch off that part of your brain until I’m finished explaining. On the other hand, though, lots of comments on a video do help with the algorithm, and likes, so as you were. Oh, and subscribe and join the ring a ding ding club too; why not.

So, the permanent item store is something that you can access either in the main menu or on the Steeeeam store page itself. The idea behind this is to build up a core selection of items that are always available for players to purchase.

Think some of the fun seasonal items that you get, or perhaps there’s stuff that the TEAM wants to offer that doesn’t fit into a DLC pack. Well going forward, you’ll always be able to get them here.

One thing to note, though, these items will not be tradeable.

“Ugg, so that mean I can no make money by trading skins anymore.. ugg I uninstall Rust now..”

Er, hold on a tick. You’ll notice that there are now two tabs, limited and general. General is where the permanent items will always be for sale. Limited is where all the regular weekly tradeable skins will go; they aren’t going away, the two store sections will coexist, so you can still speculate on the market and run your crusty little money-making enterprise as normal.

“Ok, but me make big mistake, me buy 50 nomad hazzy skin to sell later and now me stuck with them and have no money..”

Well, a) that was a bit silly, you should have learned to read, b) if you did bother to read, you’d know you can refund them, and c) hopefully that’s SUBJECT TO CHANGE and gets fixed in future so that greedy people like you can’t buy multiples of things that you can only use one of.

Well, that’s because you are.

Ok, now we’ve got that out the way; let’s have a look at the first batch of permanent items, shall we?

But first, pay attention. I has a Rusty sponsor.

So, Apart from the Nomad skin, there’s a factory door skin for the sheet metal door which has a very nice window in it for looking in and out of, great for those of you who missed out on the industrial door skin drop and totally not pay to win. There’s a craftable patterned sofa for lounging on and a triple set of industrial wall lights for illuminating your base, which come in green, white, and red flavors, seriously? No amber? Ok then. Well, I guess the Italians will be happy at least.

Ugg, don’t forget about coconut underwear; that is best. Ah yes, how could I?

Ok, so, in other news, work on adding Rust’s missing world models continues with apples, cactus flesh, potatoes, bandages, medkits, cans, and all the teas to replace the generic burlap sack, which incidentally is also getting a new model because sometimes you just need a good burlap sack.

There’s more work being done to polish up the first person spectate feature for admins that I showed you last week and a new branch called new_achievements, with the first couple being for shredding cars and winning hands in poker.

In works in progress, snowmobiles are still being plugged away at. And intriguingly, earlier this week, a commit regarding arctic bases popped up, with grey boxes mentioned for wind turbines and a dome radar. If these are anything like the desert bases in scope, then we’re probably looking at about 3 months before they are introduced. And then what comes after that? Temperate bases?..

Apart from that, Hapis island is still receiving HDRP love.. and it’s that time of year again, so this weekend is Charitable Rust.. which will include four skins.. for you to buy…

Please let me know below what you think about the new permanent item store; I’m sure you’re itching to tell me. Is it good? Is it bad? If so, why? Leave a like and subscribe to me, follow me on Twitch, Twitter, Facemetabook, Discord, and my Steeeam group to stay up to date with my content and support me on Patreon or by buying some of my merch. I shall catch you all soon, but in the meantime, keep calm and stay Rusty, cheerio.