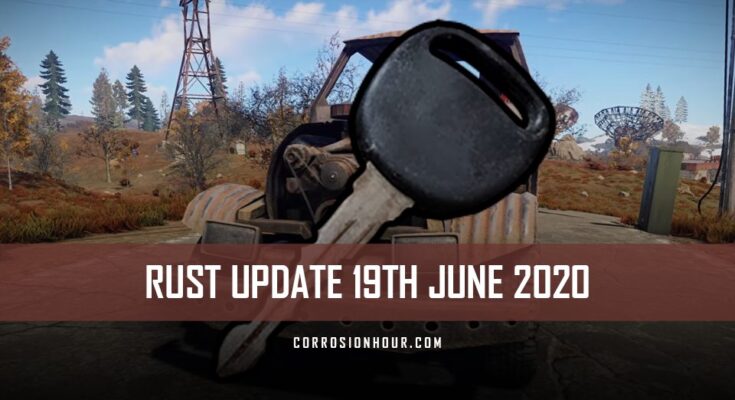 In his weekly RUST Update, Shadowfrax brings us news about the pending release of cars, which have now made it to the main staging branch in preparation for the July 2nd forced update. This week’s buzz centers around new vehicular locks that are now available to lock car storage, gas tanks and ignition. Generate multiple keys so that every member of your group has the ability to lock and unlock the car, but keep in mind that having a locked car does not stop other industrious players from finding creative methods to get at your car’s contents. This is of course subject to change by the time the update hits the release branch.

Greetings survivors and friends, Shadowfrax here with your weekly delivery of Rust development correspondence, where today a certain ‘key’ feature was added…

But first, because a lot of people clearly switch off before I say so the end of the vid, come and join me on Twitch, where I stream three times a week, Mondays, Wednesdays and Fridays, link down below..

Anyway, as I mentioned last week, cars are on the main staging branch now, and we’re expecting them to be fully merged into the release branch (that’s the one most of you play on normally) in the next forced wipe on 2nd July..

The good news this week is that we can now attach locks to our cars, to prevent vehicle theft and help lower the insurance..

These have to be put on with a vehicle ramp, cost 75 frags a pop, and come with a free key! You can create extra key(s) for your TEAM via the ramp for 15 frags each (but not mend shoes sadly) and you can also remove a vehicle’s lock with it.. (and that’s any vehicle’s lock, regardless of whether you have the key, so… technically… if you could push someone else’s car all the way across the island and onto your ramp, you could take ownership of it, although note that at the moment you don’t get anything back for removing one, not sure if that’ll change though).

But wait, there are alternative methods, it’s also possible to remove a lock from a vehicle manually in the field if you can get the cockpit module down to 15% health. Or you could just ask the owner nicely for the key… with a rock. Each lock has its own unique 5 digit ID, and only keys with the same ID can be used with them, so not much chance of someone producing a forgery..

Interestingly, keys also act like notes now, so you can add a description to identify each one (love wagon, mirth mobile etc) As an added bonus, this feature will also apply to normal door keys, if you use them that is…

And I’m thinking, it would be nice to be able to attach notes to all sorts of things wouldn’t it? I imagine this could really help with long distance communication for instance, or maybe… Perhaps even put your own stamp on a crafted item.. Let me know in the comments what you’d add notes to if you could.

Anyway, I digress… Getting back to locks, they’re not outwardly visible at the moment sadly, I’m hoping that’ll change, but in the meantime, you’ll just have to approach a car and eyeball the fuel tank or something to know whether it has an owner.. Please note: Although you can still get into a car and even sit in the driver’s seat without a key, unlike base door locks you’ll need the correct one somewhere in your inventory to drive, access storage modules, the engine, and fuel tank…

And because I’m psychic and know what you’re going to ask, no there are no plans for code lock versions.. I mean do you have a code lock on your salvaged car in real life? Didn’t think so. If you only remember one thing this week though, just remember, all of this is SUBJECT TO CHANGE, aaand we still have a couple of weeks, so it probably will.

Oh yes, and did you know cars are apparently the perfect size to fit down the Hapis tunnels.. Hmmmmm

Earlier this month I showed you some of the new animal art that’s being worked on to spruce up our furry frienemies, such as Bungle the bear and old two socks here.. Well into that mix you can now add the monarch of the glen himself.. Mr stag.. Again.. like the others, he’s so fluffy! Still no word on when we’re likely to see these furry halfwits moving around in-game, as it’s not just about new textures and models but animations and AI as well.. But I’ll keep you all up to date on this as I get more info..

In other news this week… Triangle grills and ladder hatches received a fix for damage not being applied when they were hit on their edges..

And there were a few new convars added this week that server owners and those into cinematics might be interested in, such as a couple that expand what we can do with keybinds, and a couple of car specific ones, most notably carsdroploot, which if set to false will stop cars from dropping storage items on death.. and I’ll stick the full details of these in the description for you..

Also, as mentioned previously, it seems the bandit camp is getting an upgrade soon, according to the commits it looks like not only will there be a helipad added, but also a new vendor that will be specialising in helis, and this I’m sure is all linked to the change soon that will see choppers become a harder thing to get your hands on.. More news on this as I have it so make sure you’re subscribed to the channel here for when I bring you that…

Not only is this change coming to the bandit camp, but it could be that at the same time, some of the bandits will no longer have 2 arms.. Remember those slot machines whose models have been floating around in CONCEPT LIMBO for far too long now? Well over the last week a lot more work seems to have been done on these including setting up using scrap for credits and payouts.. Now if only they could make the poker tables functional as well, I’m sure there’d always be a full house down at the dredge..

Still no news on console release or HDRP, but feel free to ask in the comments anyway, regardless, please leave a like on this video if you appreciated it.. Join me over on Twitch, and stay up to date with all my content as soon as I hit publish over on Twitter, Facebook, Discord and my Steeeeam group.. A big thank you to my amazing patrons for supporting my work here.. all my links as always are down below, I shall catch you all soon, but in the meantime, keep calm and stay Rusty. Cheerio.