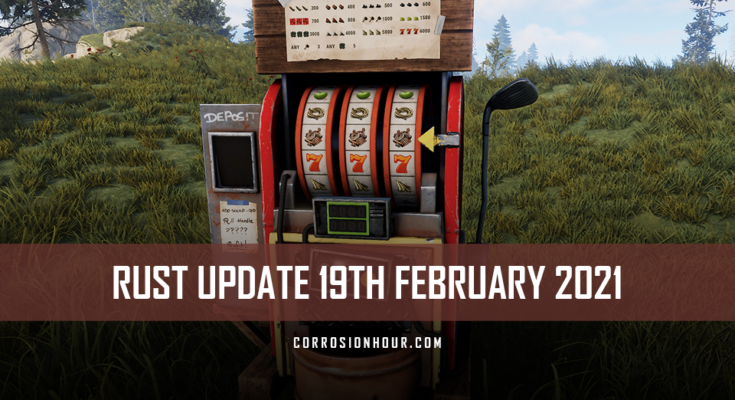 Round 5 of RUST Twitch drops has come to an end and we hope that everyone got their legendary pie rock skin! Stay tuned for information on the next round of streamers as we approach the monthly update, as Alistair made an announcement that RUST will be moving into a once-per-month schedule for Twitch drops that aligns with the monthly update. You’ve got a little time now to run around throwing pies at people.

In other RUST news, it looks like the slot machine will be our first minigame! Players can insert up to 1k scrap at a time for a chance to win up to 6k scrap. Admins on a staging branch server can spawn the slot machine with the console command “spawn slotmachine”, since they aren’t yet included in a monument location.

Greetings, survivors, and friends, Shadowfrax back at it again with your weekly delivery of freshly baked Rust development news. Including jumpsuits, Elevators, and family sharing news. But first! Make sure you’re subscribed so I can deliver you stuff like this every week.

So, today it looks like soon you’ll be able to take a new MINIGAME for a spin down at the bandit camp.

Yes, it’s been a long time coming, but in the near future, not all bandits here will have two arms, if you know what I mean. And finally, you’ll have a use for all those piles of spare scrap you have just lying around.

Currently, Slot machines can be spawned in with ‘spawn slotmachine,’ as of speaking these words, they are not in place anywhere at the camp, but I imagine they’ll end up somewhere in the dredge.

Using one works like this. First, you mount it, insert some scrap up to a maximum of 1000. Which is for your protection, trust me. And then simply press ‘E’ to pull the arm. Each spin sets you back 10 scrap, and any winnings will go into a separate section.

Most of the symbols on the reels are recognizable items from the game, and so you know the odds you’re up against, a sign with all the winning combos will constantly be staring you in the face.

Potentially you could win big and turn 10 scrap into 6000 potentially. But you can also win 3 scrap for each hammer and 5 scrap for each tech trash symbol you manage to spin. Oh, and you get 100% comfort whilst using one. Cashback!

Everything about this is, of course, SUBJECT TO CHANGE, but I imagine they’ll be in the main game with the next forced wipe on March the 4th. Talking of T’which. We’ve just finished the 5th round of drops. Where yours truly got his pie rock skin, thanks Facepunch, and quite a few of you did too.

As nice as it is having all these free skins being given out in quick succession, it seems that from now on, there will be only one round of drops per month.. with the next lot happening with the forced whip on March the 4th and lasting for a one week period just like the others. No confirmation yet on who is next, though.

Another new item that just seems to have appeared on the staging branch this week is a Cobalt space center jumpsuit. In an attractive rusty red color, perfect for blending in with tall tundra grasses or next to the sphere tank. Stealth!

It seems at present to be a reskin of the bone armor, things that indicate this being that the icon for it is bone armor, and it has the same stats. However, you can wear boots and gloves with it, so time will tell.

In other changes, The lunar new year content has now been disabled with an optional patch. There was a fix to block players being able to get inside the drone marketplace, you sneaky sneaky bunch.

And another couple of fixes should see an end to being able to stack R.F. broadcasters.. and the constant spamming of the S.O.S. frequency from the oil rigs.

Yes, but pagers still say ‘slient’ instead of silent.

We’ve spoken about this, and you need to be patient. The TEAM are very busy with jumpsuits and slot machines and stuff.

Mmm sorry. Say I don’t suppose you’ve got anything for constipation, though, have you?

Apart from that, roadsign gloves are now skinnable! Finally! And, oh yes, Family sharing of Rust is now disabled for the foreseeable future. Now, this is a hot topic, so I expect to see lots of comments about it down below. You could say there’s a slight connection between family share and cheating, for instance, but I’m sure most of you use it in a completely legitimate and above-board way; what do you think of this move? Let me know.

In works in progress. There have been a lot more commits re A.I., especially work on Junkpile scientists. There were a couple of new commits on gestures, so hopefully, we’ll get some kind of easy-to-use system for those soon.

And the work cart and underground train tunnel network are sliding along nicely, and although we don’t have anything to say when exactly it will be with us yet. I have managed to snaffle some pictures of the new associated elevator shafts, presumably for ingress to and egress from the system.

As you can see as well as a central elevator, there are also stairs and even what looks like a ramp. Plus, they go pretty deep, so I don’t know how far underground this’ll all end up being.

Just when you thought subterranean travel would be a lot safer, though, there’s also mention in the commits this week of destroyable barricades on the tracks and, oh great, the work cart is having its protective glass removed.

Leave me a like and subscribe so I can keep you firmly up to date. Join me on Twitch for regular streams, Twitter, Facebook, Discord, and my steeeam group to stay up to date with my content, plus you can support me on Patreon or buy some very sexy merch over on Teespring. All the links are down below.

I shall catch you all soon, but in the meantime, keep calm and stay rusty, cheerio.