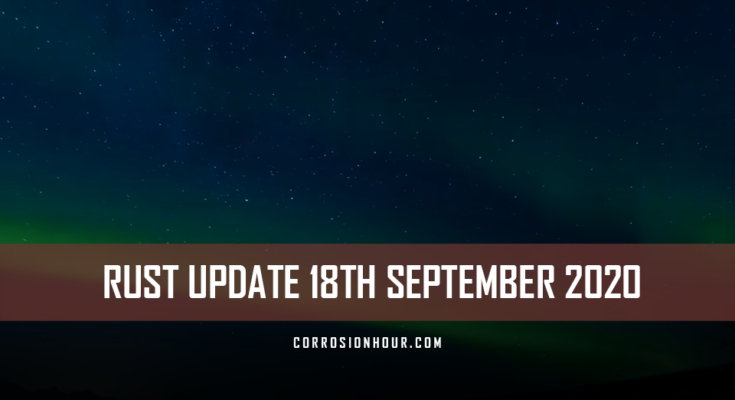 It’s been a quiet week in the world of RUST news, but that’s not to say that it hasn’t been productive! A variety of tweaks and fixes have made it into the commits for this week in order to improve game balance and solve some of the flyhack and antihack false positives.

An interesting development showed up in the “save199” branch that indicates a new type of road being introduced, labeled “trail road”. It looks as if  smaller monuments who had previously been without road access will be connecting to this new trail road in order to meet up with the larger access roads.

Greetings survivors and friends, Shadowfrax here and welcome to the news at Rust, and this is going to be a quick one, so strap thyself in and pay attention, as I shall say this only once.

I was hoping to bring you some visuals of the new elevator block this week, but it’s currently still under a big sheet, so here’s a video of some elevators going up and down a building while I say that what we know, apart from what I said last week, is that it will be an electrical item that uses ten electricity when in use and 1 when idle, it’ll have a height range limit of 6 floors and will be an I/O entity which means you’ll be able to hook it up to buttons and call it to a specific floor. What a time to be alive.

Work on new weather rumbles along on the horizon. Quite literally, as I see, there were a couple of commits related to distant lightning storm effects. Also, as mentioned, we’re going to have auroras, snow, rain, and if we’re very lucky, some drizzle.

Still, no new news on the spacesuit or Secret lab chair I showed you last week, although we’ll apparently find out soon what’s going on with these, including what a real-world brand is doing in Rust.

There were a few fixes made this week. Roof left, and right side trim conditional models are being applied to both client and server TL;DR, this should fix some fly hack false positives.

The chance of finding T1 car parts at road and water junkpiles is being reduced, although roadside monuments remain unchanged). Also, being unable to plant next to saplings or higher stage berry bushes in a planter was fixed. Phew, spicy bit of news I’ve got for you this week, isn’t it?

Works in progress are pretty much where it’s at right now, as you can probably tell, and with this in mind, a new branch popped up in the commits just yesterday called save 199, which appears to be introducing some world generation tweaks, and these will probably be part of October’s patch.

We can see powerplant radiation volumes are being adjusted so you’ll no longer get high rads when just walking around the edges of the monument.

There will be better mainland topology generation to fix things that looked like islands being considered as mainland. Beach spawn points will be kept at least 50 meters away from any monuments.

But most interestingly, there’s going to be a new trail road type, which will be generated after ring and side roads and will be there to connect various small monuments.

Also, there’s more work on missions, AI, and Voiceprops, including a commit about a telephone button sound? Hmmmmmm.

Oh, also three horses were hiding in this vid; see if you can spot them.

OK, that’s it for this week, short and sweet, I know, but next week hopefully a bit meatier with more to show and tell… Leave me a comment, like and subscribe, follow me on Twitch, Twitter, Facebook, Discord, and my Steeeam group and consider supporting me on Patreon like these amazing people already do. I shall catch you all soon, but in the meantime, keep calm and stay Rusty. Cheerio.