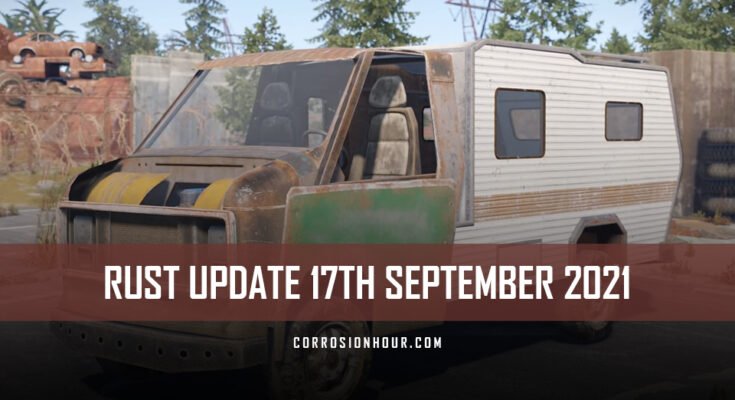 For owners and admins, a new server manager tab is in the works for making common admin activities easier. This tab will be accessible via the F1 menu and currently supports kicking and banning players and editing of some common server convars. One of the most exciting updates, to me at least, is the fix for graphics settings resetting when running a dedicated server on the same machine as the game client! Thank you!

In other news, the new camper module is rolling along and will soon be receiving a 12-slot storage box for carrying all of your favorite things! You can play test this feature now on the staging branch.

Edits included in the QoL updates:

Greetings, survivors, and friends, Uncle Travelling Shadow here back from holiday and trying to bring you up to speed on what’s been going on in Rust development over the last week or so, so I think we’re both going to learn something today.

Oh, and may I just say that I’m uploading another new CONCEPT LIMBO tomorrow, that’s Saturday, so make sure you’re subbed and joined to my socials, so you get the notification when that happens.

Right, so while we’re still waiting for the next round of content such as the new desert monument and MRSA or whatever it’s called, this month, in general, has been focused on quality of life, something which incidentally goes up when you stop playing Rust.

I’ve got a big list of changes to go through in a moment, but first! One new plaything currently on staging that you may well have seen by now, but I’m going to cover it nonetheless, is the new camper module for cars.

It’s currently SUBJECT TO CHANGE, of course, but here’s the current situation.

You’ll need two free chassis sockets for it, so it’ll only go anywhere on a three-module car, it has 4 spawn points, which are basically the seats, and just like bags, these can be assigned to a friend.

There are lockers up above, a mini barbeque because who cares about smoke inhalation, and soon a storage on the floor with 12 slots! A veritable home from home.

As far as acquiring these, right now, they’re 125 scrap to research and cost 175 frags, 125 wood, and 30 seconds to craft at a tier 2 bench. Look for them to be added to the release branch in October.

Now to the big Quality Of Life blast, which is currently on the staging aux branch, and personally, I think the team should set a month aside to concentrate on this sort of thing a couple of times a year. And there’s a lot to get through here, so listen very carefully I shall say this only once.

Painted signs can now be picked up and will retain their image because art theft, sign images can now also be viewed when selected within the inventory.

When actually creating a masterpiece, you’ll now be able to use voice chat; Bob Ross would be proud. Signs while painting will display at full quality regardless of your graphics setting (as will the map incidentally).

Signs will remember the rotation you were painting them at last, and the spotlight was changed so that large paintable surfaces like banners and huge signs are fully lit when being painted.

The player will now auto-auth on an auto turret when placed (just like a tool cupboard). And you’ll soon be able to authorize friends to your auto turret in advance.

Codelocks now have a re-enter last code UI button or can use “R” very handy.

Planters now always snap to the center of square foundations/floors, but holding shift disables this.

There should also be improved feedback for when building close to monuments etc.

The repair bench and crafting menu now both have a text search box for skins. Right-clicking scrap when a research table is open now sends it to the correct slot.

Worms and grubs now go straight to your inventory by default. Pumpkins, when right-clicked in inventory, no longer go to the clothing slot. The overall amount of a resource in your inventory will show when picking up or crafting more of that resource.

Binoculars now start from the smallest zoom when you first use them, and some missing outline glows were fixed for m249s, cameras, boom boxes, bows, and paddles.

Cargo ship vehicle parenting was fixed, so helis now can land on cargo ships, for instance. Flipping boats should now always flip them over on the first try. There’s a separate sensitivity option slider for whilst aiming down sights. A fix for radios connecting to the default rust radio even if they were set to an internet stream if a player loads in range of them. And you might like this on. Crawling players now have to press E for 3 seconds to open doors. Let me know how you feel about that in the comments.

Running a dedicated server should no longer change graphics settings for clients on the same machine; this personally bugged the hell out of me, so I’m glad to hear that.

There was a fix for server restarts choosing a random Cargo Ship variation, meaning a 50% chance that the cargo ship on the server wouldn’t match the client. The Cargo ship should now load with the layout that it had when it was last saved.

And an F1 admin UI panel is coming for server owners and admins, and this is a huge plus for managing players on your server from within the game. It’ll allow you to kick, ban and search for players instead of having to use F1 commands. You’ll be able to see a lot of info all in one place and get quick and easy access to convars.

This is all on an internal branch at the moment, but here’s an image for you to get an idea of what will be on offer.

Also, for creators who like to dabble in motion tracking, and that’s me, a new cinematic tracking marker prefab is being added, which should make that a lot easier.

Over to works in progress, and hopefully, we shouldn’t have too much longer to wait until we see the new desert base monument, this week, we can see from the commits that there’ll be some military hangars included in it, too.

And the MDMA or whatever it’s called is nearly done, and there are some very interesting commits about this.. such as a dashboard map, placing markers, and it looks like players will be able to mount it. Now you could be forgiven for thinking that this will mean you can jump on board and choose where to fire missiles at, but I wouldn’t get too excited in thinking that you’ll be able to send rockets of friendship at your friend’s base. That would be way too much fun. Instead, I believe this is in relation to an event, but exactly what sort of event that would be, we’ll just have to wait to find out.

Right, you know everything you need to now. Follow me on Twitch for streams, Twitter, Facebook, Discord, and my Steeam group for content updates, and you can support my efforts in a number of ways, such as with YouTube memberships now, by becoming a patron on Patreon or just by grabbing some SUBJECT TO CHANGE merch over on my store.. all the links you need are down below, I shall catch you all soon but in the meantime, keep calm and stay Rusty. Cheerio.