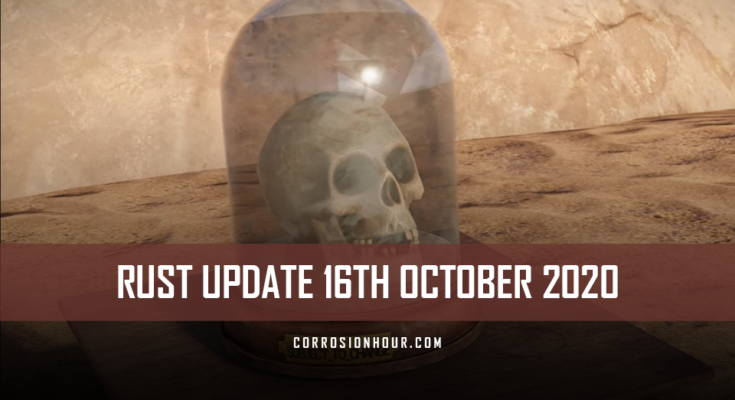 This is a glorious win for players of RUST–we are FINALLY able to mount the skulls of our enemies (and possibly admins) for victorious display! Skull mounting will come in the form of skull trophies and skull pikes and at some point soon will be available to purchase on the item store. Crafting a trophy of an enemy’s skull also includes a snappy plaque with the deceased’s name engraved so as to remove any doubts as to the identity of the previous owner.

In other news, weather continues to develop and evolve with changes to weather presets and other tweaks. More progress on the stables monument continues to make it into commits and a change to horses that now allows them to continue eating if their health is below 100%, even if their stamina is full.

A new Workcart branch has come out of hiding and reveals concepts of a cabin and the ability to mount it. It seems that this vehicle may be track-bound as additional changes related to train tunnels and overpasses are also showing up in this branch.

Greetings survivors and friends, Shadowfrax here bringing you all that’s new in the world of weekly Rust development, and don’t worry, this won’t hurt a bit.

As we negotiate our way through the middle of the month, things over on the staging branch are in their most SUBJECT TO CHANGE state, so I do have a couple of new things to show and tell. First of all, the new weather I showcased last week has received some more tweaks, with ‘rainfoggy’ and ‘rainclear’ now being called ‘rainheavy’ and ‘rainmild,’ respectively, along with better, even fluffier snow.

A couple of items have just been merged to staging in advance of the upcoming seasonal stuff, although I think you’ll get use out of them at any time of year, to be honest. Namely, Skulls on spikes and skull trophies, because as they say, you should keep your friends close and your enemies under a glass cover on the table. And, although they’re not up there at this precise moment, these will be a store item later on.

There are going to be several variants of each to keep things fresh, and crafting costs right now seem to be 100 wood and 25 frags for a trophy and 150 wood and only 1 skull for a spike. Not sure how that works.

As you would hope, putting a player’s brain box into a trophy will result in their name being engraved on the plaque beneath, with the bone-us that they can still keep you company long after they’ve rage quit the server.

It’s also now possible for server owners to spawn skulls with a specific name by using the command ‘createskull’ in console, followed by the desired title—what a time to be alive.

Destructible road signs are now working on the Staging branch, although this only applies to those found along roads and not the ones you’ll find inside monuments. They have 100 health when destroyed, will yield one pipe and one road sign, and I’m informed are currently set to respawn every half hour or so.. although this could all still be SUBJECT TO CHANGE.

There were a few small fixes this week, namely that if you’re killed by an auto turret, it will now correctly say so on the death screen, an issue with large lag spikes sometimes being caused by skin loading was fixed, and you can now place storage monitors on vending machines too.

Also, horses should continue to eat if their health is below 100%, as it was their stamina level, which previously determined this. Talking of which, work is ongoing with the new stables monuments, and here’s another visual of one of them for you.

As I mentioned last week, there will be a couple of different types at least, but we still don’t know exactly what they’ll mean for the future of our horsey friends or when we can expect to be saddled with them.

There’s a lot of work still going into the cloth_test branch, which I believe from the looks of things has to be to do with cloth physics. So lookout for something flapping its way towards you in the near future, whatever that happens to be. My guess is either someone wearing a sheet. Or, maybe even a flag? Now that would be a big plus.

And lastly, the Workcart branch, which was almost entirely secret until yesterday, it seems, is now full steam ahead with work on a Workcart, unsurprisingly, which apparently will be Mountable, have a dashboard monitor showing fuel status and throttle settings, glass panels, and a cabin.

No visuals yet, of course, but it seems to be related to train tunnels and an overpass. So, perhaps we’ll finally get to use all those rails? Stay tuned, and I’ll keep you on track with this when I get more news.

Right, you’re up to date, make sure you’re still subscribed and leave a like if you’d be so kind, join the notification gang by ringing Schrödinger’s bell, follow me on Twitch for weekly streams and stay up to date with my content on Twitter, Facebook, Discord and my Steeeeam group. Thank you once again to my mighty Patrons for their ongoing support, and I shall catch you all soon, but in the meantime, keep calm and stay Rusty,