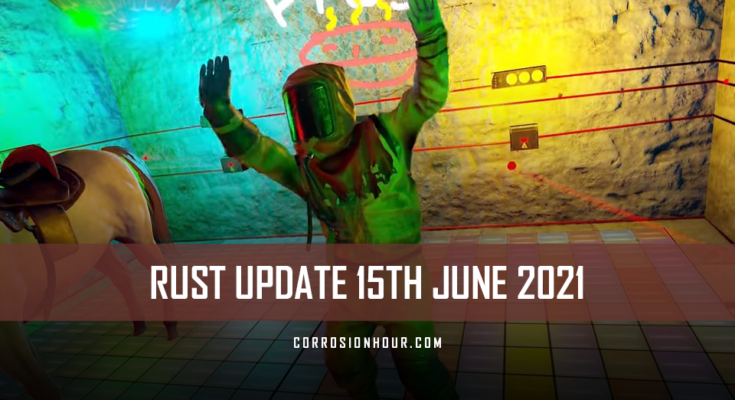 In an unexpected, mid-week surprise, Shadowfrax brings us tidings of new DLC on the horizon! The DLC is set to contain 17 items for players to enjoy–perhaps enjoy too much. Items found in the DLC  include:

Greetings survivors and friends, Shadowfrax here with an exclusive look at the brand new Rust DLC, which I promised to show you as soon as I could get my hooves on it.. and well, Facepunch have very kindly let me have a play around early so I can show you all the new content that you’ll be able to throw money at probably on July the 1st all being well. This message will now self-destruct, beeep!

Now, there were a lot of theories flying about regarding exactly what it would include, the working title for a while has been the ‘voiceprops’ DLC, and whether or not that will be what it’s called at launch, there was speculation that it would probably include some audio equipment. Well, speculate no more because I’m going to give you all the juicy details right here and right now.

Oh, and needless to say, everything I’m going to tell you is, go on, say it, say it, or I’ll say it in your MIND. SUBJECT TO CHANGE.

The DLC includes 17 separate loosely connected things to play with, so it’s nearly on a par with the sunburn DLC from last year. I’m going to take you through the items one by one, and you’ll also find timestamps for each in the description, ‘cos I’m nice like that.

So the first items are a cassette Recorder and three different cassettes, apologies if you were born too late to experience the wonders of this lost ancient technology, but it’s really rather simple. Just insert a cassette into the recorder, and use RMB to record and LMB to playback. You have to press the voice chat key to record your own voice whilst it’s recording, but it will record anything it hears in its proximity.

For instance, you could do this and then play it next to someone’s base for some reason. If you want, you can even throw it with R, and it’ll stick to surfaces like a satchel charge; now I don’t remember being able to do that with the real thing but hey ho. Also, when played, tapes will auto-loop until stopped.

Cassettes come in three lengths, that’s 10, 20, & 30 seconds. Each is pre-recorded with a song that’s handy for irritating people with. But thankfully, they can be recorded over as many times as you want without a loss in quality, which, to be honest, wasn’t exactly there to start with. You also have to rewind them with a Biro, just joking.

A nice feature is that you can write on cassette labels, revolutionary!.. Plus not sure if a bug or feature, but if you record whilst the tape is playing back, you can create some interesting layered tracks.

Now, this is quite fun on its own, but cassettes can then be taken out and loaded into other devices for playback and more.

For instance, they can also be inserted into a deployed Telephone to unlock Voicemail functionality. So, for example, you can record an automated message on the cassette with the recorder, then pop it in the phone, and if someone actually calls you, after a few rings, it will play your message, and they can leave a voicemail (Your outgoing message is safe and won’t be recorded over by the way).

Hay, how you doin’? Sorry, you can’t get through; why don’t you leave your name and your number, and I’ll get back to you. Maybe.

The answering machine will only store one message, sadly, the most recent one, but will give a timestamp along with who left it. Please also note: Taking the tape out will wipe all messages off of it apart from your original one.

The next new item which can be used with cassettes is a Portable Boom Box for carrying on one’s shoulder; just put a tape in and press LMB to start and stop playback. But now here’s where it gets really interesting. If you take the tape out and press the RMB, this window will pop up.

Basically, the TEAM has sorted out a way for us via this DLC to play internet radio in-game.

There are some URLs already programmed in, but it will support any direct MP3 streams and URLs pointing to a .pls or .m3u file, and you can store a list of your favorite stations.

There’s no actual limit on how many concurrent devices can be playing at once on a server; apparently, it’s mostly handled by the client, so server performance shouldn’t be a worry. That is what I’m told anyway.

Now you may be thinking, this is the perfect deterrent against being raided by all those streamers; simply play some copyrighted music whenever they’re around. Well, sorry, but you can turn off hearing internet radio streams in settings, and cassette recordings, in the same way, you can turn of signs.

I think this’ll be a pretty big feature for some people, so I’d be interested to see what you think about it, whether you’d use it yourself, and if so, which radio stations you’d recommend in the comments down below.

The next step up from a shoulder-mounted boom box is one of these, and you might remember me showing you the artwork for this one a long time ago. Just called a Boom Box, this one Requires 10 power at the moment, and as well as playing cassettes and internet radio streams, it has a toggle on input and an output to connect to external speakers.

And here is one of the connected Speakers in question, which requires 1 power to run and can be connected in a chain of up to 15, I believe, so technically, you could pipe hospital radio throughout your base nice.

For those who want their voices to be heard, the next two items should be interesting. First of all, a microphone Stand which requires 1 power and needs to be connected to a speaker, you have to mount it to use it, and the menu allows you to choose between normal, chipmunk, or ogre (high and low) voice effects.

I was going to record that last bit of dialogue actually through the microphone stand, but it appears the speakers are obnoxiously loud at the moment for some reason. So I didn’t bother. I think that’s going to be turned down a little bit though, I hope so; it’s a bit loud.

For demonstration purposes, or hostage negotiations, the next item is a megaphone – Very easy; just press LMB to broadcast your voice whilst holding (and it apparently projects your voice just over double the normal distance. That’s about it..)

Continuing the mobile theme, the next item is a Mobile Phone. That well-known brand, the ‘Ello mate’ – Just press LMB while holding to open the phone dialer, apart from that it’s just like a normal phone, good for distracting people when you see them near a phone booth, not pay 2 win at all.

We’ve got recording, playback, microphones, internet radio, and mobile phones, so what comes next? What’s the natural progression here? I’ll give you a hint; this next scene contains flashing lights to some extent, so you know, look away now if you’re sensitive or just don’t want to know.

Introducing 4 new disco-themed items. The music light which does the flashings, the music lasers which do the laserings, the disco ball which rotates and reflects, and the disco floor, which does this, all require 1 power each at the moment so are very energy efficient, and apart from the disco ball, they all have settings for color/pattern, volume sensitivity, and speed. Plus, if you connect any of them to a boom box (apart from the disco ball), they’ll sync in time with the music. But there is an option to limit the flashing from the lights if you want to.

Oh yes, and there are 3 dances for the gesture wheel in this DLC too. Because all gritty survival games need dancing. You’ve got this one, this one, and this one.

Other things to note are that there will apparently be 7 Steam achievements to go along with all of this, although I don’t know what they are yet, and the cargo ship will be getting a PA system too. But this is currently in testing and SUBJECT TO CHANGE. Something that’s also SUBJECT TO CHANGE, and so I don’t even know why I’m showing you are the crafting cost for these items, but I’m sure these won’t stay the same, so don’t get too hung up about anything.

Good news is, I think all of this will be going live for you peasants to test on the staging branch in the next few days, and I will be streaming it too at some point this week, so come and follow me on Twitch and switch notifications on, links are down below. I don’t know how much it’ll cost yet, but I’m sure the TEAM will let us know before long.

Please let me know in the comments what you think about all of these, are you excited, or are you just like ‘me want to shoot things, no need roleplay crap ugg’? I want to know, also follow me on Twitter, Facebook, Discord, and my Steeeeam group to stay up to date on my content.