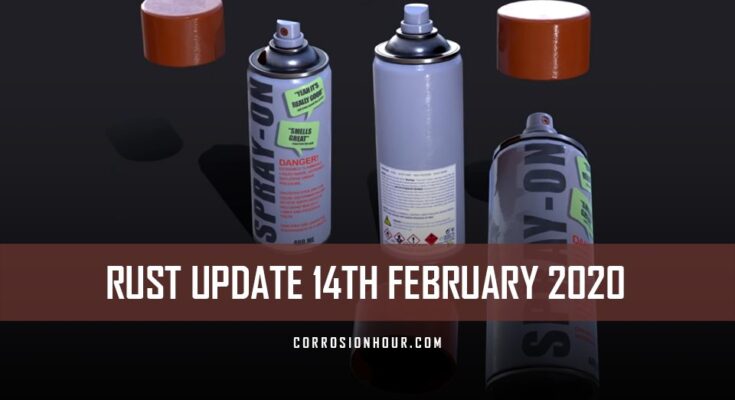 In this update video, Shadow Frax resurrects the spray paint cans from concept limbo, as they’ve recently made an appearance on Twitter. Not much detail in this area, as it’s still only a concept.

We also see the continuance of lots of new work being piled on into the ‘Vehicles’ code branch. It seems there are clear ties to the RUST electrical system, as we can see car lifts taking shape.

As with all of RUST development, there are plenty of rumors going around, as Shadow Frax also raises ideas around the Minigun, although not confirmed, it could potentially be able to be used by players while also being mountable, perhaps on the existing turrets, the new scrap cars, and who knows where else!

In addition to this, there also a round up look at all of the new items available with the new RUST Farming 2.0 and mention of a new version of Unity that RUST will be migrating to soon.

With that, you’re here to watch the video!

Make sure to slap the subscribe button and shoot up the notification bell in case one day it decides to work.. no harm in being future proof eh?

So what do I have for you this week? Well, those of you with still functioning memories may recall that many moons ago I showed you an idea for a spray can in RUST, that has been in concept limbo ever since… but just within the last 24 hours (as I write this) it resurfaced in an animation posted to Twitter.

Now I do have to emphasize first that this is still just an idea, and that just because we’ve got some new footage of it, doesn’t mean it’s moved any further forward but it is an interesting prospect.

Also, exactly what we’ll be able to do with it, if and when it ever moves out of concept limbo, is still unknown.

Will it be something for freestyle graffiti and Banksy-esque adventures? Or just a tool for reskinning certain large objects such as boats or building parts?

If it was for graffiti could you use it to camouflage your base? Could you tag bases you’ve already raided? Would you have to wash it off with buckets of water with more being needed the longer it was on there? What would the aimcone be like? And should it really just be called RUST-Oleum instead?

So many questions and I guess we’ll just have to wait for answers.

I’m gonna put a high vis X on dead bodies I come across like they do to kangaroos here to show that they’ve been checked and are in fact dead.

High vis paints like they use to spray dead kangeroos with, to show they’ve been checked and are definitely dead.

Although that would only apply in RUST if we were actually able to play dead, with a ragdoll key or something LIKE I’VE SUGGESTED A BILLION TIMES ALREADY! Plus it would be good practice for when you actually die a few moments later.

I wouldn’t get too excited though, it’ll probably end up just being a boring tool for re-skinning, but we can always hope eh.

Further to last week’s video about the MINIGUN model, which I showed you as being in the works, I have heard rumors and they are just rumors, that not only will we be able to hold it in our greasy mitts, but possibly also mount it on things.

Does that mean scrap helis, turrets, cars? Really not sure at the moment, but I’ll tell you when I find out.

Talking of cars, much work is still going on, with many commits relating to the vehicle lift, a video of which was posted to Facepunch’s Instagram as far back as September last year.

Seems this will be an electrical item, but how we’ll use it, where we’ll get it, how big it will be and where we’ll find the bits to build cars is all still an unknown.

There was also a fix in the commits for everyone in any seat trying to hold the steering wheel, shame that could’ve been fun.

Work on HDRP continues of course, with this week’s commits seeing many improvements to caves and mines along with better blending between terrain and underground entrances, plus some upgraded cave textures.There’s also a new ‘branch’ to optimize the foliage grid.

The next iteration to farming is also still being moved forward, with the small planter becoming a default blueprint to help farmers get their hands dirty early on.

There’s the sprinkler system of course, as mentioned before, a composter, fertilizer, and now of course dung. What kind of dung exactly? Will we be making this ourselves or?

Now, this could open up a whole pile of possibilities. Dump your thoughts for me in the comments below.

Talking of dung, a new version of Unity- 2019.3 is out, and RUST is being moved over to it I think. Although, of course, there are always little wrinkles to iron out so I’ll update you on progress as we go. In the meantime and if you’re that way inclined, I’ll leave a link to the release notes in the description.

Join me over on Twitch where I stream three times a week, and please consider funding my habits on Patreon like these amazing folk on the right here.

You can keep up to date with my content also on Twitter, Facebook, Discord and my Steeeeam group and I shall catch you all soon, but in the meantime, keep calm and stay RUSTY.