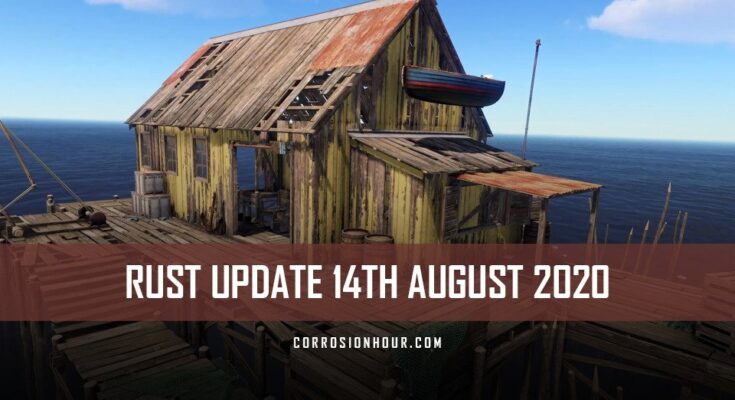 This RUST update video is brought to you by Shadowfrax and contains no shortage of nautical puns!

In this RUST Update, we sneak an early peak at the upcoming fishing village monument. This monument work coincides with several commits involving the kayak and paddle which, presumably, will be a product available for purchase from the yet-unnamed fishing village vendor. Maybe the Sand Pie?

Greetings survivors and friends, Shadowfrax here with your latest haul of Rusty development fish, and in this episode, I have news you won’t want to miss on searchlights, muting players, and MISSIONS.

KAYAKS ahoy – because Rust needs more boats. Yes, as mentioned last week, the development current has now shifted to the seaside. And it looks like soon we’ll have a new 2-man craft to splash around on. This model that’s been floating about aimlessly for a couple of years now has been called both a raft and a canoe in the past, but now is correctly being referred to as a kayak because of the seating position and the fact that it has a two-bladed paddle, which used to be called an oar.

Thank goodness we’re using the correct terminology now, though, eh? Unlike the SPHERE tank, that’s still called a DOME for some bizarre reason…

Anyway, some new details have surfaced. First, we’ll be able to paddle left and right whilst seated with the left and right mouse buttons, although using WASD will still work.. not sure whether this means that if both players coordinate properly then they’ll go a lot faster?

And as mentioned previously, the oar, sorry I mean paddle. Was initially meant to be a melee weapon too. But as this commit shows, it looks like not only that, but we’ll be able to launch it at people!

This is just all part of a larger effort to change the way watery transport is acquired in the near future, and as you may remember, recently, I’ve been mumbling things about a new fishing village monument. Well actually, although this is still about a month away, there will be not one, but three fishing villages, each with their own boat shop, and the first visual has now finally moved into view. As you can sea it’s all looking very nautical, and if you squint your brain you can just about see a rhiiiib in this one’s boathouse.

Details, visuals and functionality are of course all SUBJECT TO CHANGE, but will this become the main, or only way to get boats? We’ll have to wait and sea.

Also, if the Heli vendor is called Air wolf, will the boat vendor be called Sea lion? Or is that just too obvious? How aboat, Moby dock? Ship happens? Bow movement? or Pier pressure? Please suggest the cleverest boat shop name you can come up within the comments.

Just this week, Helk started up work on a new branch simply called ‘Missions’, and if you remember, he did threaten more RPG elements in a recent interview.. and by RPG I presume he doesn’t mean one of these…

Exactly what sort of ‘missions’ will be available when this is done, and exactly who will be dishing them out is very much unknown at the moment, but some questions, of course, arise. Do fishing villages indicate that soon the TEAM will tackle fishing rods? And if so, will there one day be a mission to do some fishin’? I guess you could say that would be OFF THE HOOK.

In performance, there has been a lot of farming optimization related work recently. with more efficient growth calculations, to hopefully reduce the load. Also, the clone option will now show as default when mousing over plants whilst holding rmb, splitters will split fluids evenly when draining through them. And heaters will now affect planter temperature. These changes are, of course, limited to the staging branch at the moment.

In other news, the storage monitor that I spoke of recently seems like it’ll be an item that will be deployed inside containers and take up a slot, at the moment it’s planned to work for tool cupboards, but it seems that it’ll also be used on other storage devices. And it looks like it’ll be a rust+ integrated item for monitoring your storage, funnily enough. More details on this when I get it.

Some gaps in conditional roof instances were closed up, which is nice. And a number of other small fixes were made, for instance, to stop wounded players blocking server-side projectiles (such as rockets etc) as if they were standing up. Also, a fix to stop players getting stuck in the recent driver’s queue of a car if the queue has multiple drivers in it.

Over on staging a couple of important changes to deployables were made this week. Searchlights are now electric, requiring 10 power each, they have a passthrough so can be chained, and can be repaired and picked up, which will of course cause them to lose health like other deployables, however, they won’t decay anymore as they are now io entities, but can only be placed on constructions.

In addition to this, reactive targets now have electric inputs and outputs, along with ways to raise and lower them. Not only is this fun, but it also means you could trigger stuff remotely with a good enough aim.

There’s a new benchmark demo, which can be triggered by typing ‘benchmark’ in console on the staging branch.

And, in a game-changing move just out today, when you mute a player in chat, they will automagically be voice muted too. So, seeing no evil, can now also mean hearing no evil. Of course, this is just on the staging branch for the moment.

And lastly, 5 new cinematic studio backgrounds were just added for map editors and film-makers and can be spawned via an editor. Thanks, Facepunch! What an amazing bunch of chaps they truly are.

I would be grateful if you could leave me a comment down below expressing your valuable thoughts on today’s update vid. And if you enjoyed it even slightly, then please leave a like to let me know. Sub to the channel for weekly news, and much more, join me on Twitch for streams and stay up to date with my content on Twitter, Facebook, Discord, and my Steeeam group. Thank you massively to my patrons for their continued support. All links down below. I shall catch you all soon, but in the meantime, keep calm and stay Rusty. Cheerio.