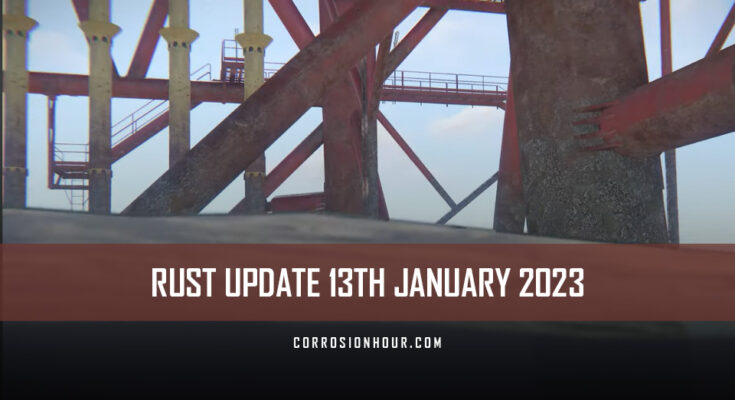 The RUST community has been buzzing since the release of the Industrial System to the AUX2 staging branch earlier last week. Along with a new furnace type and several Industrial components to familiarize ourselves with, there’s also the immense task of conceptualizing ways to put this new system to good use. Many from the community have contributed their early ideas for practical circuits (mostly subject to change due to the Industrial System’s early release status) to help with base management, crafting, loot security, etc.

If you are unfamiliar with the upcoming changes or if you are the team’s builder and you’re looking for a place to get started, check out our first-look introduction to the RUST Industrial System. The introduction is a good place to start as there is a lot to know about the Industrial System, and chances are good you’ll need to utilize it in some way (since your neighbor is sure to be).

In other news, the water is much more watery now! The water effects have had a modern makeover from the shoreline to deep water, swamps and rivers. One significant feature change you’ll notice is the realism of the waves. Whether you’re at the shoreline or out in deep waters, the waves will react accordingly. And speaking of weather, they respond to the weather, which is good news for storm watchers.

Other changes in this week’s RUST Update

Greetings survivors and friends, your old mate Shadowfrax here back with the goods from this week’s Rust development loot run; where today, I’m taking a look at the all-new 300% wetter water in Rust and a peek at what else is coming down the pipes.

But first, following on from last week’s industrial crafting reveal. Things continue to be SUBJECT TO CHANGE, just as predicted, and there have been a number of changes already.. so let’s go over them, shall we?

You can now add adaptors to smol oil refineries, lockers, and coffins. Sadly there are no plans yet to let you hook mixing tables up to the system. But of course, this might change. I know a lot of you have been asking for that one, and I can’t see why it wouldn’t work. So my advice is to keep asking. BBQs, Composters, planters, and hitches and troughs would be welcome, too, if you ask me. Why not just let us stick adaptors on everything? Trees, Nodes, bears, and other players, just cut out the middleman.

You can now add up to four adaptors to large furnaces and up to four on large wood boxes plus, it’s now possible to daisy chain containers instead of having to link them via a splitter or combiner with conveyors now being able to look beyond the first container on a chain.

You can rotate splitters and combiners when placing with R (I wish we had that option on electrical stuff). Storage adaptors now have little notification lights with red flashing when an item is removed from the attached container and green when it gets added.

You can have up to 12 filters on each conveyor now. There will be on and off electrical inputs on the crafters soon, plus an extra slot inside for any cases where an item needs more than four components to craft.

And although the exact speed at which items will move through conveyors and get crafted in benches is still up in the air, there are a couple of new convars to let server owners control this, and they are Server.conveyorMoveFrequency and Server.industrialCrafterFrequency, with the default for both currently being 5 seconds.

Now I know the prospect of this new system has sparked a lot of imagination in the community, mainly with regard to how it could be abused for fun and profit. This is generally the way with every new thing that gets added to Rust.

And I did test out a few things on stream with the community last week, which threw up a few interesting possibilities. For instance, being able to evacuate loot to a more secure location in the event of a raid via an HBHF sensor or other method, which is a no-brainer. Keeping external TCs stocked up, pulling stuff straight out of large furnaces to storage inside your base to prevent theft, and the biggest has to be keeping your main TC stocked whilst also having it completely sealed off, as it’s currently possible to place pipes through walls.

Now, this does sound pretty OP, except that there is a risk-and-reward thing going on here. For instance, if the attached conveyor gets destroyed through accident or otherwise, how are you going to reconnect it? Maybe you could access it from a shaft above? That’s one idea. But some have suggested that you should only be able to run pipes through doorways. This is something that I believe will be monitored, and if it turns out to be too much fun, it’ll get nerfed just like everything else in life.

Talking of which, electric furnaces, although not using wood as fuel, also don’t use wood as fuel, so therefore, obviously won’t produce charcoal as a by-product. I’m not sure if this will change and we’ll get to be able to cook a bit of wood in them if we need some, but I believe, like everything else I’ve just mentioned, between now and when the system is merged to the main game on Feb the 2nd we’ve got a couple of weeks where it’s still all SUBJECT TO CHANGE, so stay tuned and keep giving feedback.. including in the comments below… and if in the meantime you’d like to test this out for yourself, you’ll find info in the description on how to opt into the branch that it’s on.

Now, one thing that has been sloshing around in the development back rooms for a few months is work on the next iteration of Rust’s water, and whilst it’s not going to be ready for February’s patch, it is currently also available to gawk at on the same branch as the industrial crafting stuff.

I’m assured that performance is staying the same, but this should be a big visual upgrade, although I don’t have access to a full list of the differences. There are a number of observable improvements to note.

The actual shoreline looks a lot nicer, with sexier foam and caustics. The wave topography is more detailed and realistic, it seems, and is affected by the weather now, with storms making everything more extreme and choppier the further out you go.

The line between underwater and above water is much nicer to look at now and makes a lot more sense. And you should expect this system to include new, improved boat physics when it arrives, which won’t be next month, as I say but sometime after that.

Hello, erm, yes, it’s been a while, I know. Just wanted to say the smart alarm description still says it sends “a notifications” to your phone. That’s it, really.

Ah, good call; I’ll send “a notifications” to the team about it; thanks.

Speaking of the TEAM, they are working on a lot of other things, including, as I’ve said before, such stuff as pets, building skins, new monuments, procedural cave systems, and weapon racks.

But also, interestingly, not only remote-control drones but also remote-control turrets, and it seems multiple people will be able to connect to the same remote-control device, although only one will get to drive it that’s going to be fun spying on and possibly shoot the neighbors should be very interesting, but please let me know your thoughts on being able to do this.

Oh, and don’t forget it’s Trust in Rust this weekend, raising money for charity as well as including some Twitch drops! Keep an eye on the Rust blogs and social channels for more info!

You are now a very up-to-date person indeed. Please drop a like and a sub, and you can support me directly if you like with super thanks via Patreon, YouTube memberships, or my merch store. You can also find me streaming on Twitch and keep up to date with my content on Twitter, Facebook, Discord, and my Steeeam group.. Links are all below… I shall catch you all really soon, but in the meantime, keep calm and stay Rusty, cheerio.