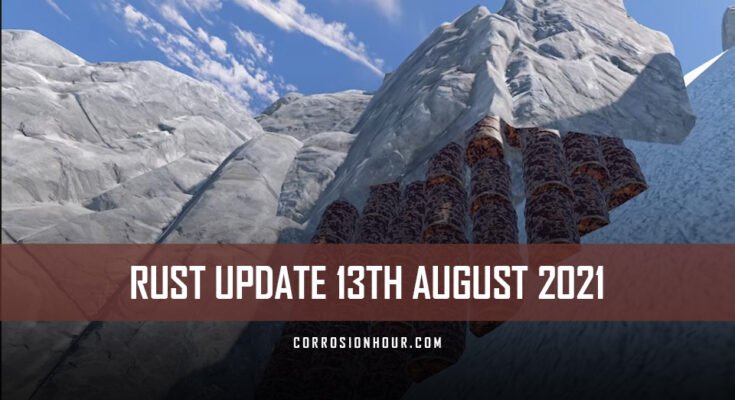 We are now a week into the wipe, which means the undersea adventure update has been battle-tested and kicked by the player base for a little over a week now. Many tweaks and changes to improve performance and fix bugs have taken place behind the scenes to improve your play experience. That said, we are sorry to hear that just yesterday, commits show the complete removal of the surface torpedo from crafting, vendors, and their world items. F in chat, please.

RUST Submarines will soon take a little more damage from bullets and take 75% less explosive force when struck by the direct torpedo (soon to be renamed simply ‘torpedo’. RIP). Sonar will soon blip only for subs that have their engines on, and backseat passengers in the duo sub will be able to swivel all the way around. Fun stuff!

In other development news, the camper module for modular vehicles has been pulled up from the back burner with a flush of new commits that add sleeping bags, a locker, and even a barbecue. Mobile respawn points are on the horizon for those nomadically inclined. And a new monument, the desert military base is showing up in commits!

Greetings, survivors and friends; Shadowfrax here once again with your weekly fix of…fixes and other stuff from the world of Rust development. Where today I have Hapis news, sleeping bags on wheels, and mobile rocket launchers?

Spank that subscribe button, join the ring-a-ding-ding club, and let’s all just get on with our lives, shall we?

So, it’s the Ides of August, and that can only mean one thing. Well, two things, I guess. Firstly, the new underwater update has been thrashing about on the docks for a whole week, and thus the TEAM knows approximately what needs to be changed now (i.e., what you’re having far too much fun with)

And secondly, whatever comes next has started popping up in the commits for you to collectively grumble about and prompt you to light little candles for what’s left of your frame rates.

To begin with, there were a couple of optional updates to clients and servers over the last week to murder some bugs that had been summoned into short-lived existence by the tsunami of moist new content. These were fairly minor and mostly targeted visual annoyances but also included some performance tweaks, such as sharks now sleeping whilst no one is looking.

Popular opinion states that a shark, like rust itself, generally doesn’t sleep in the traditional sense, but they probably do all sorts of things when you’re not looking, so nobody’s quite sure. Ah, the mysteries of the sea.

Talking of which, over on staging, the way submarines function will be changing slightly. Blips on the duo sub’s sonar will now only bloop for other subs that have their engines on. So the hunt for Rust October might not be quite so easy.

Bullets will do slightly more damage to subs, and riding in them now also counts towards your boating stats. Also, rear passengers can swivel all the way around now but no longer drink because that’s just so irresponsible.

A toy you were clearly enjoying too much and thus must be confiscated is poor little Hardy the surface torpedo. He was just too blasted good at his job, and there was something mumbled about not being able to counter a sub when it was submerged unless you swam out; ahh, well. Reality asserts itself once more and proves everything is still SUBJECT TO CHANGE…

You can, of course, still blow up those annoying boat users with Laurel, the direct torpedo, which has now been renamed to ‘torpedo.’ You just need to be surfaced to do it. Sadly though, the explosion force on boats has been reduced by 75%, and while at it, the explosion forces on minis and scrap helis were also reduced by 95% to prevent players from being buffeted about too much by SAM sites.

Aww, was it a bit too wibbly-wobbly out there?

In other related changes, soon not all waves will be on the surface, as you’ll be able to gesture underwater and whilst swimming, not dancing, though. The ‘clam’bada is definitely off-limits.

In yet other changes, a bug that was preventing players from gesturing on the sofa was squashed. Spearguns and spears have had some world model and animation updates. Not sure how one fits inside the other. Subs should stop moving faster when a player dismounts. If a player is holding Back when they successfully catch a fish, then backward movement is now blocked for 1s while the fish is caught.

And the Workbench name is being made consistent with its spelling elsewhere in the game (i.e., as one word instead of two.)

Hey, it’s a shame about the ‘orse, you wanna see somefin?

Oh, hello there, who are you?

Prefab wolf? Ok. What have you got for me?

Go down the ‘angars.. there’s somefin ‘uplifting’ about one of the boxes.

In works in progress. It looks like we’re getting a new vehicle module.. one that was mentioned a few months ago but has been sitting on the hard shoulder in CONCEPT LIMBO since.. according to this week’s commits, it seems like it will have more than 2 sleeping bags/seats in it.. it’ll include a locker.. and a small barbecue. How big is this thing? Or will you have to buy it from Dr. Who?

Stay tuned for more details and some visuals as soon as I have them.

After a break of 3 months, Hapis work has officially started up again. It was, of course, disabled after the HDRP backport visual update and requires a lot of rubbing and sanding to get it into shape, plus the opportunity is being taken to modify it significantly. It looks like this week’s work is concentrating on the south part of the island and desert area.

Talking of which, what’s that coming over the hill? Is it a mon–ument? Yes, indeed, just when you thought there weren’t enough no-build zones, it looks like a new desert military base is being hammered out and no visuals yet as it’s in the greybox stage, but it does look like there will be several variations and the loot could be in-tents?

Whatevs. It could be that something else rather intense might be lurking there, although this is just speculation, but also in the commits this week are mentions of an M270 MLRS… or Multi Launch Rocket System.. which, as far as I know, is usually found glued to a Bradley chassis. What on Earth are they planning? Why not tell me what you think in the comments.

For admins who need to fix any gaps in the landscape that they might find on procgen maps, some help is on the way! No longer will you need to spam hobo barrels to fill them.. 6 different types of spawnable rock prefabs are available just on staging at the moment, but these will let you plug any troublesome holes that may crop up. I’ll put the names of the prefabs in the description. You can use ent kill on them but once spawned, they will otherwise survive a server restart. Just be responsible, won’t you?

Oh and, the next Twitch drops will be with the forced whip on September 2nd. I know a few of you want to know that.

Thank you to all who continue to support me on Patreon. All links are below if you wish to join them or grab a SUBJECT TO CHANGE mug, short, mask, etc., etc. I shall catch you all soon, but in the meantime, keep calm and stay Rusty, cheerio!