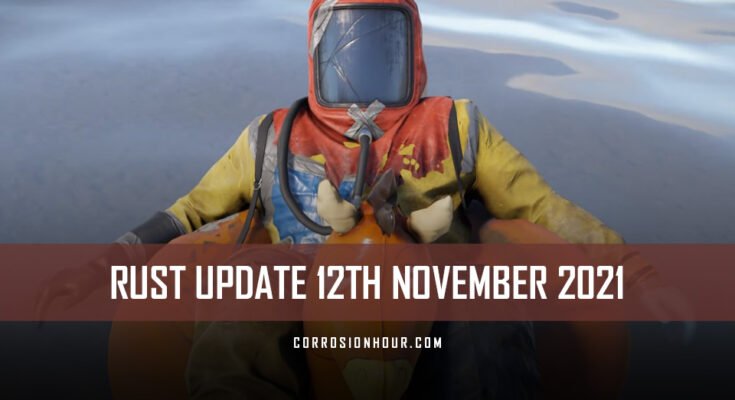 Server transitioning is coming! A curious, visible commit under the mostly-hidden status of the ‘nexus’ branch revealed earlier this week that watercraft may now transition servers via the ocean. Suddenly, the world of RUST just got a lot bigger.

So far, it sounds like only Official Servers will be debuting the transition feature, and the list of servers that will be linked will be of a similar wipe schedule and ruleset so that the playing field will be reasonably even. We don’t know yet if there’s a cost associated with hopping servers (other than low-grade fuel) and what, if anything, you’ll be able to take with you. The only thing you’ll for sure have access to between these linked servers is your blueprints.

There’s no word yet if or when server transitioning will be made available to community servers. Still, we suspect that if it becomes available in the future, it’ll be a setting that server owners will enable or disable. More on that as information becomes available.

In other news, an updates branch has been created to address fixes and adjustments to the MLRS after its release launch. Some changes will affect the spread of the MLRS rockets as well as improvements to the control UI. And work continues in the WorldModels branch to provide more models for game items that have been rocking the burlap sack look for several years.

Greetings, survivors and friends; Shadowfrax here depositing some hot steaming news on your doorstep once again, and now the TEAM have mostly finished with the new desert bases and the recent seasonal stuff, it’s time to take a look into what comes next because, as we all know, Rust never sleeps.

But first. If you’re not subscribed, you could be helping me get to 400k right now. And that would make you feel really special inside, so slap that button and join the ring-a-ding-ding club whilst you’re at it!

So, to begin with, one commit this week on the Nexus branch got a number of tongues reeing, and it was this one. “Allow all water vehicles to transfer to different servers through the ocean.” And yes, that means boogie boards and inflatable rings too.

Now, this is still being worked on, on an internal branch, so it isn’t live yet, but I have spoken about it before, and it’s certainly not a new concept; for instance, it was part of Garry’s mind map for Rust from over 7 years ago, that’s before a lot of players were even born!

In a nutshell, the idea allows you to move between certain servers with an as yet to be confirmed quantity of gear and items. Therefore creating a much larger experience and potentially smearing server populations over a greater area.

But hark! What’s that sound of reeing I hear in the distance?

Ugg, so fully-geared zerg with all blueprints will come and raid my server. Ugg, I have 14,000 hours, but now I stop playing; Rust is dead, ree.

Aww, are you still looking for a brain?

Ugg, yes, I am still looking for a brain.

Joking aside, If I had a pie for every time I’ve seen this reaction in response to the idea, well, look. I’ll let the man himself tell you. “Btw, it’s not like you’re going to be able to take a boat from “bob’s 100x server !kits” to EU1. This is something different.”

Obviously, if Facepunch allowed that, then it wouldn’t just be a scarecrow looking for a brain, and excuse me but did you always have a gun?

Alright, so the following has been confirmed to me, so listen very carefully. I will say this only once.

Server transitioning – when it gets implemented – will only be available on official servers for the foreseeable, although possibly in the future, it will be made available to the community. But that’s SUBJECT TO CHANGE.

In addition to this, transitioning will only be allowed between predefined sets of official servers in the Nexus, and they will all have the same wipe schedules, so the playing field will still be level, just a lot larger.

As for what you’ll be able to take with you in the way of items, that’s unknown at the moment, but really the risks will be the same. It’ll just be like you’re on a huge server with a continuum of islands instead of just a single one.

This means if you don’t like where you are, you can escape next door without having to start from scratch, because yes, the good news is that BPs will be shared between linked servers.

The following is just speculation, but I reckon if it does ever get expanded to community servers, then it would be an optional thing, and server owners would be able to specify which other servers they would allow transitioning from.

Now I’m sure that if you are any kind of Rust player, your little brain will be busy trying to think of exploits and ways to abuse the system. Of course, it is, but remember, this is all early days, and the full details are not known.

How easy will traveling between servers in this way be? Will there be any costs involved? How often will you be able to do it? How much stuff will you be able to take with you? Will this be a step towards the holy grail of wipeless Rust? And will Grammar horse ever run out of spelling errors?

I sincerely hope not.

What I’m trying to say is, don’t jump to too many conclusions but rather stay tuned so I can force-feed you tasty facts when they become available.

I still want to know what you’re thinking, though, so please leave me a comment below, and I’ll take a look at it, yo.

In other news, a couple of fixes were made, namely for horse corpses not being lootable and a case where inserting a loaded weapon into an auto turret would sometimes lose the ammo already loaded into it.

Rockety McRocketface is receiving some tweaks on a branch called ‘MLRSUpdates’, and these include a number of improvements to the UI and some changes to the accuracy and spread of the rockets when they hit.

Over on the AUX branch on staging, First Person Spectate is being introduced, which will be a big bonus for content creators and admins alike.

It’s not quite there yet and needs a bit more work until it properly replicates what the player you are spectating sees, but hopefully will be done in time for next month’s patch.

Work to fill in the blanks on Rust’s missing world models continues with this week apples, potatoes, and cactus flesh being on the menu, along with an updated version of the generic burlap sack.

There’s some more progress on the Hapis Island conversion, but still no endpoint in sight yet.

And as mentioned last week, a snowmobile is in the works, which seems like a rather specific mode of transport. Is this another seasonal thing, like the sledge? Assuming you’ll only be able to use it on snow. Perhaps there could be some cold biome-only islands that you’ll need to use it on? Nah, it’s probably just a seasonal thing.

I’ve got a new Rust video coming out this weekend; it should be fun to watch.. so keep an eye out. Leave a like or a dislike, subscribe to the channel, follow me on Twitch, Twitter, facemeta, discord, and my steeeam group to know what I’m up to. Buy my merch and support me on Patreon. Links below. I shall catch you all soon, of course, but in the meantime, keep calm and stay Rusty. Cheerio.