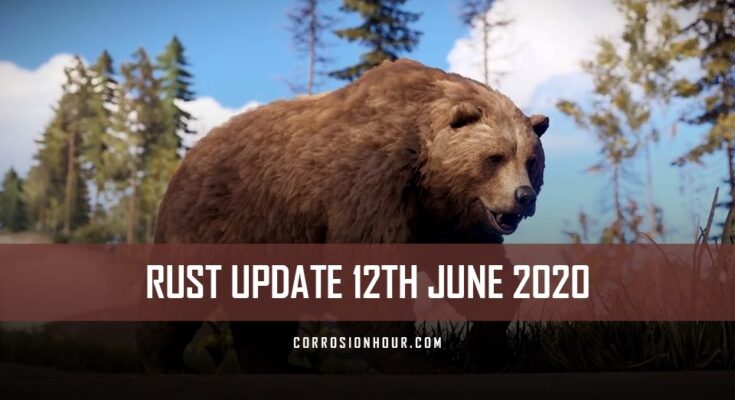 In this weekly RUST update, Shadowfrax shows us some of the work appearing on the staging server and the official RUST Instagram page. It appears a bit of remodeling work for the animals, bears, and wolves has been underway. Bears appear to now have the appearance of a grizzly and wolves are, well.. just terrifying. More progression has been made to vehicles and is now able to be tested on the staging servers, along with the knowledge that car keys are being worked on.

Greetings survivors and friends, Shadowfrax here with your weekly update on Rust development, and if you go down to the woods today, you’re in for a… familiar sight because nothing has changed.. yet.. however, as you can see from the thumbnail, something big and decidedly hairy is afoot, with a long awaited rework to animal art.

Nearly a year ago, can you believe it! We had a major update to horse models, and whilst they were understandably the most important beast and have rightly galloped ahead in this regard, our other furry frienemies are finally catching up.

This shot of the new ‘improved’ bear was shared on Instagram by the TEAM earlier in the week, and as you can see as well as the model and textures looking very different from the old 1990s version, this new murder-beanbag actually has fur! It’s so fluffy!

The most important question of course being: does this mean bearskin rugs will now become even more luxurious underfoot.. I guess we’ll have to wait and see.

Not only, but also, over on Instagram this shot of the new wolf 2.0 was released, and just when you thought the TEAM couldn’t make them look any friendlier and more cuddly, they go ahead and do that very thing.

There’s no date for these to be released into the wild yet, apart from ‘when they’re ready’ and as the refresh includes completely new models, textures and fluffy/feathery bits, this could take a while.. And before you ask.. I don’t know if there’s going to be any adjustments to the AI included in this round, which to be fair is already ‘cutting edge’.

Anyway, I for one am looking forward to being jumped by hyper realistic wolves and bears in the middle of the night now… But how about you? Do you think this refresh should stretch to extra sounds, such as howls in the distance so we can actually know when a murder-doggo is nearby? Or like me do you just want teleporting bears back? Let me know in the comments.

Being just under 3 weeks away, vehicles have now trundled off of their own beta and can be found on the main staging branch. This last week has seen a number of tweaks to steering and force adjustments, and now they can finally trigger laser detectors as well, which is jolly handy.

But the biggest news here is that car keys are now being worked on, and although this is all still SUBJECT TO CHANGE, here’s what we know so far.

Cars that spawn in the wild won’t have locks and can be started by anyone, but once you get one onto a vehicle ramp you’ll be able to add and remove locks and generate a key or even keys, in case you want your TEAM to all have one, for getaways etc.

Then only a player with a matching key will be able to drive it, access the engine bay and any attached storage modules. It doesn’t prevent players without keys from actually sitting in the car, but they won’t be able to just hop in if it’s moving at over a certain speed.

Question is, does this mean we’ll be able to key cars as well? Stay tuned for more news on this as we get deeper into the month.

In works in progress, the commits show some additions are being made to monuments with the bandit camp getting its own helipad soon, along with a new vendor.. Which looks like it’s going to be selling helis.. hmmmmm! Plus a remake to external high wood gates to bring them up to current visual standards and a static version for monuments.. So does this mean the bandit camp will have some kind of wall around it soon? Or does this apply to some other monument? I’ll bring you more on this when I have it.

There were various fixes this week that touched on the new building blocks, and sorted some problems with blueprints for ladder hatches and floor grills.. HDRP and console work is still ongoing but there’s no news on times for these still so don’t bother asking, and most importantly there’s a fix incoming so you’ll be able to sit on all those unmountable bandit camp sofas.. praise be.

Follow me on Twitch right now for streams every Monday, Wednesday and Friday, join me on Twitter, Facebook, Discord and my Steeeeam group to stay up to date on my content, and if you can chuck a dollar my way on Patreon it would help a lot at the moment.

Thanks to these fine chaps on the right for their support.