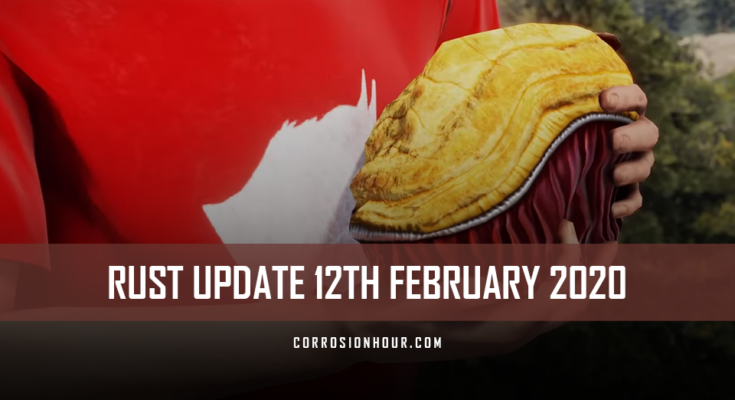 THE PIE HAS HAPPENED! Round 5 of the RUST Twitch drops has begun with the second round of OG streamers including the Lord of the Pies himself! Be sure to enable drops for your account and start watching toward this round’s charming skins.

While you are hanging out on Twitch, consider stopping by Art_of_Pilgrim‘s channel to check out the work of Tom; one of Facepunch’s 3D artists as he works on the new submarine model! We had the pleasure of watching his stream earlier this week where he answered questions on 3D modeling, working for a game studio, his favorite items in RUST and a whole lot more. Watch RUST being made rather than RUST being played!

This horse is starving; you wouldn’t know it to look at him, he IS eating, but he’s malnourished. Why? I’ll tell you why–he can’t get any pies. And he’s severely constipated, but that’s another story for another time.

But now you can give him pie and fill all of his nutritional needs with my new pie rock skin.

Nodes? Not a problem. Trees? Bonk. You can even force-feed it to your friends.

Ok, so we did it, lads. You can’t spell Crust without Rust, and finally, pie is in the game. Well, as part of the next round of Twitch drops. This is my skin, oof. And it’s not SUBJECT TO CHANGE.

A huge thank you to Johnny Oldboy for his outstanding work on this one; I really couldn’t have wished for better. As well as my own skin, I am, of course, joined by 11 others, most of which will be earned by watching individual streamers, but with three being awarded for watching any Rust stream with drops enabled. This is round 5 of Twitch drops in Rust, would you believe, so you should know how they work by now, but if you don’t then, I’ll leave a link in the description that’ll explain the whole process.

You can earn these between the 11th and 18th of Feb, and personally, I’m going to be streaming tonight, that’s Friday UK time, Saturday evening, and a few other times over the next week, so follow me on Twitch and Twitter and my Discord too which will be the best places to know when I’m going to be live. All the links will be in the description and in the pinned comment.

Enough about pie for the moment; what else has happened this week?

Well, there were a couple of optional updates from the TEAM, which were just to fix a few generic bugs and exploits; best if you do keep your clients and servers up to date, though.

Of course, it’s that time of year again, so you’ll notice a few seasonal items in the shop, as well as firecrackers being a default BP for the next little while. They’re quite cheap, and they go bang.

I mentioned the spawnable drone. For admins anyway, last week, watch that vid for more details. I did neglect to mention, though, that if you have tool cupboard auth, then you can rename them with your hammer out. So it seems the functionality of these has been fleshed out somewhat, and I wouldn’t be surprised if we are able to use them properly at some point.

There were a few fixes over the last week that you can look forward to. The heavy helmet overlay should no longer cover the chat, and there was a fix for Dropboxes being difficult to deploy on stone walls.

A bit of work to clean up icons for items has been going on, too, with one or two being updated, and those in the hot bar are going to be slightly less opaque, about 90% opacity instead, so they don’t stand out too much.

Also, the delivery fee at the market is being changed to be per purchase instead of per quantity – so each time you click Buy, you’ll be charged one delivery fee no matter what quantity is specified.

Right! Just as 90% of an iceberg lettuce is beneath the surface, so too it is with Rust development and in works in progress.

That Submarine is coming on swimmingly, Tom’s been streaming more of it this week, and it’s now getting its textures on, including, of course, plenty of Rust. Not sure exactly how long we’ll have to wait until we’re able to take it for a spin, but of course, one has to wonder whether more is going on under the surface that will actually make using a sub worthwhile. Such as this concept from January 2016 maybe. Leave me your thoughts in the comments.

There’s more progress on the Workcart and associated tunnel system, interestingly I think, for map makers especially, a new ‘Darkness’ environment type is being added for train tunnels, and this will apparently disable directional light and make the skybox completely black. Also, a single environment volume can now have multiple environment types. Sexy.

There’s more work on a static elevator variant for monuments. More work on AI. Lots and lots of hidden commits. And finally, this commit. Showing some fresh progress on the new animal models, namely animal fur, and that’s the fur-st we’ve heard in 8 months. You may remember these images that emerged from the undergrowth back then. Let’s hope there’s more soon.

Please subscribe and leave a like, let me know your thoughts in the comments, join me on Twitch, Twitter, Facebook, Discord, and my Steeeeam group. Thank you to my supporters on Patreon as well. All the links you need will be down below, including my merch store, where you can get SUBJECT TO CHANGE mugs in all sorts of colors.