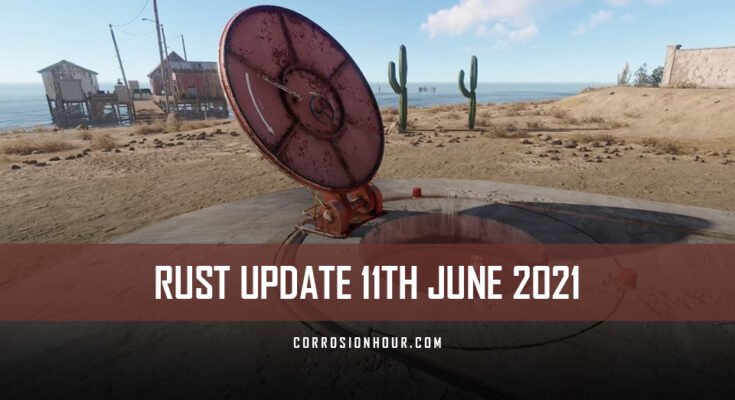 Now that we’ve merged the new animal AI and Contacts system in June’s Contacts Update, it’s time to gaze into the future to see what is coming down the conveyor. One branch that has us especially excited with its recent activity is the ‘submarine’ branch. In addition to all of the juicy commit information around the functionality of the submarines themselves, new commits regarding underwater labs have bubbled up. From the looks of it, the underwater labs are intended to be procedurally generated, which is a new concept for game monuments! Very little details are available at this time, as the devs are currently working on demo layouts, but I may have some ideas in mind…

In other news, the ‘treebird’ branch has been merged into staging, which means that you can head on over to your nearest staging branch server to checkout the feature in its current state. And train tunnel bunkers are pushing along, which will add nice variety to the ways that players enter the subway at various points around the game map.  Players will be able to enter the train system via bunker hatches when in the countryside, rather than the Transit centers that make more sense inside or nearby monuments.

Greetings, survivors and friends, and welcome to another Rust update. Don’t worry; it’s not as bad as it looks. I’m still alive, on the inside. Sorry that I’ve been missing in action for a couple of weeks or so, but if you missed my social posts, I’ve just been having an out of PC experience for a bit, so that’s all. I’m fine; reports of my death have been greatly exaggerated. I can’t say the same about Grammar horse, though. Died from a lack of spelling errors—such a pity. Ah well, he’ll probably respawn.

Anyway, I’m currently making do while things are fixed, but it doesn’t look like we missed too much in June’s big patch, which certainly wasn’t anywhere near as big as May’s. But assuming you’ve recovered from the shock of the new improved and fluffier animals, colored wiring, the contacts system that lets you write people in your little black book, and being able to rig up your smart alarms to execute order 66 via IFTTT whenever you get raided, then we’ll start looking at what’s going to be poking its head out of the rusty pipe next.

Firstly, as you can see in the thumbnail, I have some fresh artwork for you from the train tunnels new content branch, and these are bunker entrances that will be adding variety in the way that you pop in and out of the subway system, especially in the countryside away from monuments. As you can see, they’re a bit lower in profile and have a hatch that can be opened and closed. They lead down into a bunker room beneath but beyond this; I’m told they’ll link up to stairwells as per normal.

Talking of which, there’s also a 360-degree stairwell being made which will just allow for better procedural alignment to the tunnel system. Plus, I see a small commit from a little while ago that was easy to miss, but that mentioned train signals at junctions, which I don’t have any visuals for, but I’m assuming might give early warning of other workcarts coming down the track. Not sure when this branch will be merged, but probably quite soon, I’d say.

Birds. What are they? We don’t quite know. We hear them, but we never see them. Except for chickens, of course, but they’re technically more of a pie filling. That’s all changing, though, because something that was recently merged to staging was the treebird branch. What this basically means is there’s a chance that when you hit a tree, either intentionally or just because you’re a rubbish shot, a birdie will get startled and fly out of it in search of somewhere more peaceful. You can’t see them beforehand; it’s just an effect, like that old thought experiment; if a tree gets hit in the forest and there are no birds around, does anybody care?

The reasons for this effect seem to be twofold, firstly to add to the sense of realism because Rust is so hyper-realistic, as we all know, and secondly, to potentially give away your position, although the birds do move quite fast and might not be that easy to trace. Let me know what you think about this change in the comments, please.

There were a couple of fixes over the last week, namely one for player mouths not moving when voice chatting and a couple of bug and exploit fixes related to minicopter pushing and dismounting, but there won’t be any noticeable differences in normal play.

Over to works in progress stuff, and the TEAM is very busy on a number of branches, firstly one that popped up just recently called new wounding, and there are three main changes that I can see in this so far.

A new downed model state with new animations for wounded players, a being looted flag for players so you can tell when someone is rifling through your pockets, but most interestingly, initial work on a crawling wounded state, which will be a possible variation when getting downed. Now, all we need is the ability to go prone and a ragdoll key, and the ensemble will be complete. More on this when I get it.

The new AI system is still very much SUBJECT TO CHANGE and continues to be tweaked. There’s the render scale branch which is still getting all sorts of interesting commits, and of course, the Submarine branch, which I know a lot of you are eager to see surface is chugging along nicely with the ability to push them having been added, and very interestingly there are some new commits regarding underwater labs. See, I told you!

Something worth noting is that these are seemingly going to be procedural, or at least partly procedural, which would be a first for a Rust monument, but I think we’re going to have to wait a while before any of this is implemented, as I believe it’ll all be launching as part of a wider underwater overhaul.

Right, that’s you up to date; please leave a like and subscribe, join me over on Twitch for streams, follow me on Twitter, Facebook, Discord, and my Steeeam group to stay up to date with my content and support my efforts through Patreon or via my merch store, links are down below, and I shall catch you all soon but in the meantime, keep calm and stay Rusty. Cheerio.

Erm, yes, hello? Sorry, it took a bit longer to respawn than normal erm. I’m a bit hungry, though, so if you find any spelling errors in Rust, please just send them to [email protected]; ok, thanks, bye.