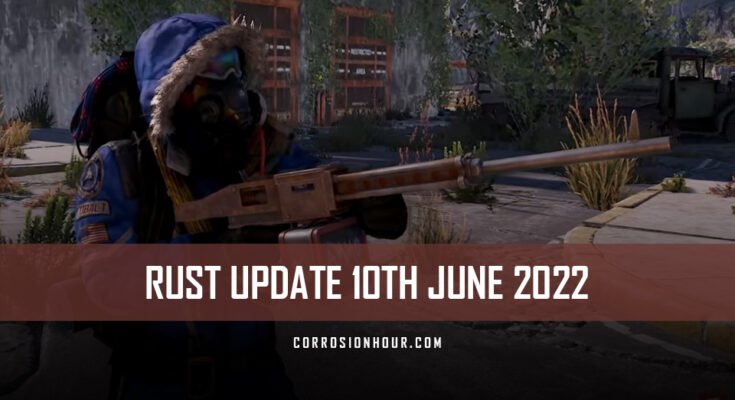 It’s been a busy week since June’s Combat Update went live. Some players have enjoyed the combat overhaul, stating that gunplay is more intuitive, while others have indicated that recoil is now too easy to be fun.

To add to the mayhem, RUST introduced the new HMLMG with the update; a craftable machine gun with devastating payloads. The Extended Magazine was also introduced, a new weapon addon that would extend the magazine size of compatible guns by 25%.

To address balance concerns and performance issues, Facepunch released a follow-up PVP patch this week. You can find highlights of the changes here:

It’s no surprise that the HMLMG is getting hit with the nerf stick this week after it was introduced into the game like a wrecking ball. The emergency PVP Balance patch has increased the weapon’s crafting cost, made the recoil more aggressive, and the durability was reduced in the attempt to level the weapon’s over-the-top power out a bit.

The bonus to accuracy that players were seeing from adding a silencer to their weapon has been removed with the patch. Scoped weapons will now have greater recoil as part of the balance.

In a rare occurrence, the development team invited the community to propose names for the newest monument still in development. The new monument was introduced as an ore-harvesting plant to give the community a prompt, and the team welcomed everyone to make suggestions for potential names.

Do you want to name our next monument?

Give us your best answers in the next 24h! We'll pull the 3 we like into a poll for voting.

Greetings, survivors and friends. Shadowfrax here with your weekly Rust digest. Well, weekly when I make them weekly. So how are you enjoying the big PvP mixup so far and the new HMLMG? Is it everything you hoped and dreamed about, or is it not quite your cup of tea hmm? I’m not going to give opinions here; I’m just going to let you do that in the comments.

But, as with everything which is at all times and always SUBJECT TO CHANGE, we have today received a balance pass in the form of a now ‘optional’ but still very much recommended patch. The patch addresses some feedback following the update and offers some performance gains.

As you can see here in the list, there are some visual tweaks to damage indicators along with adjustments to recoil, durability, and crafting costs for the HMLMG. As well as the accuracy bonus being removed from the silencer, scopes increasing recoil, and a load of fixes and improvements to Hapis island.

I’m sure this won’t be the last balance update we receive, so keep up the constructive criticism.

Other stuff that’s being worked on currently for next month’s patch includes. A server ping alert that will show when joining a server that has a higher actual ping than the one shown in the browser.

Animal headshots will now play a hit marker and sound. Things that lose durability when picked up can be repaired at a repair bench. Flashlights and lasers will stay on if you put your weapon away and take it out again.

Jackhammers will hit the hotspot every time, with the bonus being reduced to keep the speed the same. You’ll be able to put photos in mailboxes soon. Streamer mode will hide chat profile pictures and the map name in the server browser.

And two new admin commands, ‘appban’ and ‘appunban,’ will ban and unban players from using the Rust+ app without banning them from playing on the server.

Now to works in progress, and as you may know, the trainyard is being reworked currently, and part of this rework is going to include a new section; the TEAM has been asking the audience for help with a name for it over on Twitter. And they’ll be holding an internal poll soon once they’ve ironed out their favorites.

This is a minor detail, really, and none of my bismuth, but I’m happy to see how it pans out.

The shots I’m showing you here are all heavily work in progress, so don’t take them as final, please. But apparently, there will be a new event associated with this monument, and from the commits, I get the impression that it might involve loading trains, but I’m not sure.

What I do know is that work on hooking up all the existing monuments to the above-ground train line is well underway, and this is planned to happen in August if all goes well.

Also, in the commits is mention of more work on pets, with a doggo being teased, assuming this might be from taming a wolf? Or will we get a new dog breeder shop monument that sells dogs and accessories like leads, biscuits, frisbees, and small plastic bags to pick up the dog eggs with? Time, I’m sure, as they say, will tell.

It’s a fairly light month this month, but you should now be up to date. As per if you enjoyed this vid, please show it by liking, subscribing, and all the rest. Join me on Twitch, Twitter, Facebook, Discord, and my Steeeam group for updates.

Support me directly if you wish through YouTube memberships, via Patreon, or on my merch store links below. I shall catch you all soon, but in the meantime, keep calm and stay Rusty, cheerio.