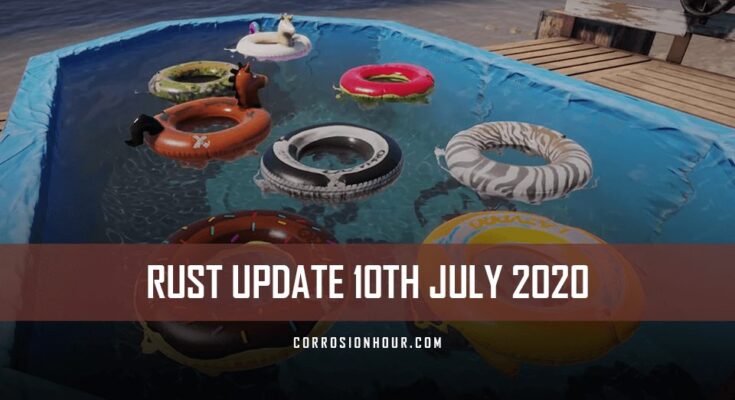 The RUST SunBurn Summer DLC is here and so is Shadowfrax with a roundup of the new beach-side features in his latest RUST update! Get the lowdown on pools, floaties, furniture and water pistols and an upgrade to underwear (for those of you who partake). Another item of interest for you artistic types is the new camera item that allows you to take photos of things, add a caption and then mount them on frames to hang in your humble dwellings!

Greetings survivors and friends, Shadowfrax here and welcome to another episode of ‘Ree, why do they spend time making fun things when all I want is to be able to run the game on my toaster?’ or as you may know it, the Rust Update. And this week’s news is dominated by the ‘SunBurn’ Summer DLC which dropped on Steam in the last 24 hrs for all of you to buy if you want, so I’m here with a full ‘summery’ for you. Also, I have 2 keys for said DLC to give away and I’ll tell you how you can have a crack at winning one later in the vid.

Right! So. If you didn’t know, haven’t been watching my updates, or have just been hiding under a beach towel for the last month, the Rust summer DLC is here. So let’s have a look at what’s included in the package shall we?

First of all, Pools:

The big one, holds 2000ml, (yeah I know that looks like more than 2 liters), has so much room for activities, and ideally should be placed on foundations, you’ll need a platform about 4 x 5 to accommodate it, although if you can find some level-ish ground that’ll work too, then there’s a smol one which holds 500ml, and comes in 5 exciting flavors, liquid is not included with either so you have to fill them up manually, but such is the fun of summertime.

What’s perfect for doing this job are our two new weapons, well I say weapons, you can only fill them with water.. and before you say anything, they’ll only make another player wet if they are also holding a water gun, if so, the more you shoot them, the wetter they become and eventually they’ll start to lose health, so in this way they offer a kind of opt-in PVP mode, but definitely, no giving people frostbite in the cold biome type pay to win malarky here.

The water pistol holds 250ml and can be filled up with the right mouse button at a water source, fresh, or salty like the tears of your enemies, Each squirt deposits 10ml and there’s a pleasing marker noise with a successful hit, The water blaster holds 1 liter, is craftable in 5 different colors which are perfect for TEAM fights and has a better range, but must be pumped every 500ml by pressing ‘R’.

As with other water containers, you can also sprinkle your crops and put out various fires with them, but not heli crates, so don’t get too excited. They do have that nice liquid shader going on though, Just as I predicted.

Around the pool, of course, you need some summer furniture for that alfresco survival experience, and so you’ll be glad to hear there’s a beach chair and a parasol which cools you down a bit when under it, both available in 8 different color schemes, a side table, and a towel, again in 8 styles, which is basically a sleeping bag and that will reserve you a respawn point on your favorite beach. Just make sure you get it set down early to avoid disappointment.

For use in the pools, or in any water source to be honest, there’s an inner tube which you can float around and travel on, 8 varieties of which are craftable including horse and unicorn models, neigh, although you won’t be able to move around if you’ve got a shooty stick out. And a boogie board, which is somewhat faster, lower and has 7 styles, both of these are rather fragile though and don’t take much to pop and sink, and standing on them will make them slowly lose health too, you idiot.

Why not visit one of your local oil rigs on one? I’m sure you’ll get on swimmingly over there.

However, one of the most exciting items in the DLC I think is the generic brand instant camera. Each crafting of which lets you take up to 30 snappy snaps of whatever you want really, and scribble titles on them, you can zoom with the right mouse button pressed, switch between focus modes with ‘R’ and manually focus with shift + right mouse. But that’s is not all. You can then mount your masterpieces in one of the three new photo frames included in the package. Simply hold E on one and drag a photo into its inventory, you can also enhance them by drawing on them and swap them around at any time.

And talking of frames, we now have some facial furniture in the form of sunglasses in 9 styles, which although making everything very slightly darker when put on, won’t cut down glare to any significant extent or grant any protection. In case you were wondering, but to be honest, who cares when you look this hot?

Lastly, but certainly not least, it was decided to actually give you some fresh undercrackers to wear, and when I say fresh I mean it. For those of you who own the DLC and actually wear undies, there should be an icon in your inventory now by the side of your character and from here you can select one of 4 styles of southerly necessities. Splendid!

Apart from the swimwear, all the other items function like musical instruments in that they can be used by anyone who finds, buys or steals them, but can only be crafted by DLC owners.

I realize I didn’t mention crafting costs, but that’s because I couldn’t be bothered and they’re boring, but I’ll stick them in the description for you how’s that?

The DLC is available on Steam now for $9.99 with an initial 10% discount. and I’m reliably informed that it’ll be available all year round for the antipodeans amongst you I guess. Oh and there are also some extra Steeeeeam achievements to go along with that.

As I said at the beginning, I have 2 keys to give away for the SunBurn DLC, and down below you’ll find a link to enter. I’ll draw 2 winners randomly from the entries on Sunday 12th of June at 5pm BST so keep checking your emails around that time as you’ll need to reply to claim your copy. All the best!

In other news this week, because there is still such a thing.

Some intriguing commits were happening over the last few days that hint at an ‘elevator block’, but so far everyone has been rather tight-lipped about it. Is this a new building piece? Or does it pertain to a monument?

Apart from that there were some small tweaks and improvements to cars, with collision damage having been reduced by about a third after feedback about it being too high, and more leniency when it comes to placing car lifts, to allow them to be stuck in tighter areas.

There’s not a huge amount more to report on this week, but I’d imagine as work on the DLC is over apart from the fixes to obligatory but nevertheless, entertaining game-breaking bugs, we should see the TEAM move on to other things over the next week. Like hopefully allowing us to insert water blasters into turrets.

Join me on Twitch where I stream three times a week, keep up to date with the nonsense I produce on Twitter, Facebook, Discord and my Steeeeam group and if you’d like to support the channel be sure to check out Patreon and maybe join the ranks of these smashing supporters on the right. Links are down below. I shall catch you all soon, of course, but in the meantime, keep calm and stay Rusty, cheerio.