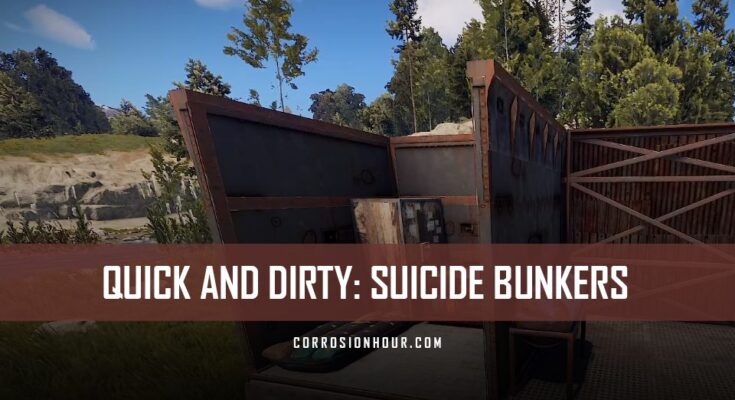 The Quick and Dirty: Suicide Bunkers video is provided by our partner Rust Daddy.

In this video, Rust Daddy provides an overview of the current suicide bunker techniques while showcasing a new and improved method of passing loot through two layers of armored walls, using the cursed cauldron.

In addition, he also walks through a second manner of doing this utilizing simply, a single dropbox which does not require a purchased skin, but a blueprint.

What’s up guys, Rust Daddy here. Today’s video is going to be a little bit different than the others as I will not be showcasing a design. Instead, I decided to share something with the community, something that I’ve discovered and thought to be worth a Quick and Dirty format video.

Back in October, Evilwurst introduced the double-bunker group base The Exasperator. The designed employed a trick of passing loot through two layers of walls with the use of the cursed cauldron. This quickly became the center of attention not only for the players looking to pass loot easier than drop boxes had to offer, but also for the game developers who were very eager to patch the exploit away.

Two months later, and after the patch, the trick is still functional. However, not being able to place the cauldron once destroyed forces the players to resort to a fallback method which is not ideal to say the least. Therefore, in this video, I will be presenting my method for passing  loot through two layers of armored walls which may easily incorporated into suicide-bunker-type base designs.

Apart from drop boxes, suicide bunkers may be achieved by sticking a large wooden box through the wall with the help of roof mechanics or by entity clipping a barbecue. However, the containers are not replaceable if destroyed and need to be setup very early in the build.

An alternative is placing a cauldron on the stair foundation just under a floor tile. Since cauldrons are cheaper and easier to replace than drop boxes, this makes it an ideal method of passing loot in and out of the secret basement storage.

As a surprise bonus, here is the method of passing loot through two armored walls using only a single drop box. A method that I call the Aztec uses stair foundations and walls placed at an angle. This way, a drop box can stick through the side and be accessible from both ends. This brings me to the grand reveal of passing loot through two armored walls with the use of cauldrons.

The first method uses armored stair foundation facing inwards of a series of triangles. This way a cauldron can be placed right in the middle and it will stick through the layers of armored walls.

Alternatively, place two stair foundations instead. As an example, this may be used for setting up relatively cheap yet strong external receives.

The second method uses armored stair foundation placed at an angle off a honeycomb square foundation core. Here, the correct placement of the cauldron is of the upmost importance as its protruding hit box is relatively small.

To be able to place it correctly, rotate the  cauldron until you see three closely packed stones and then stand on the side and place the cauldron as close to the edge and the wall as possible. While a bit more difficult to reproduce consistently, it is still a very powerful tool that may be incorporated into pre-existing designs such as Evilwurst’s Exasperator.

And there you have it,  a more-convenient method of passing loot through two layers of armored walls. So go out there, use it and share with the rest of the community before it gets patch.

This was Rust Daddy and may the next wipe be ever in your favor.