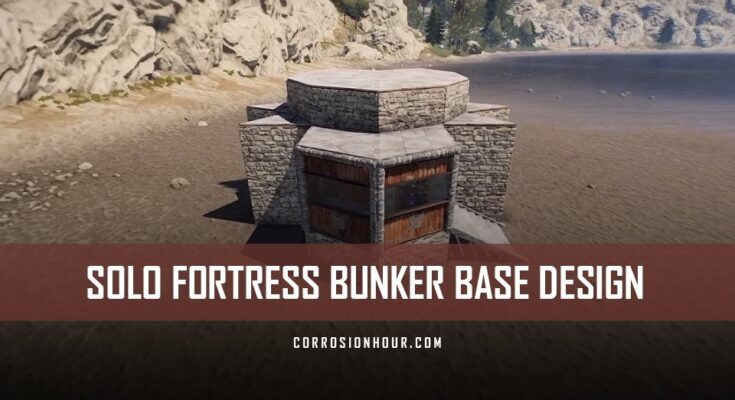 The Solo Fortress Bunker Base Design

This RUST base design video, the Solo Fortress Bunker Base, is brought to you today by our partner xRaw. This base is designed for vanilla servers and solo or duo play.

RUST base designs that feature compact item placements will always “do more with less.” This concept allows players to fit more storage and functional items into a confined space, allowing for maximum usage of the space, while potentially keeping a lower profile base footprint.

Bunker entrances allow players to create low resource investment bases with a high return when it comes to required raiding resources. Bunkers often take advantage of game flaws and allow players to build them into their overall designs.

When building a RUST base design, it’s important to not build a single centralized loot room. When raiders take aim at a base, having spread out loot rooms is the best chance you have at stopping them from pushing further into your base and potentially taking control of the tool cupboard.

Spread out loot rooms increase the probability that the raiders will not pillage the entirety of resources you’ve worked hard to collect. The odds are in your favor, especially the larger the base being raided is. In addition to this, having loot spread across the base allows for ease-of-access, so that all occupants don’t have to open a hundred doors just to get to some commonly needed materials.

A simple base footprint allows builders the ability to memorize the core foundation “footprint” of the base. This often means that a RUST base build can be committed to memory, allowing players to build from scratch without having to follow a detailed tutorial to replicate the intended base design.

Hey guys, and welcome back to another video. In today’s video, we’re looking at a RUST base design which goes from a starter to a main base. This base is a solo to duo base and contains features such as compact item placement and a bunker entrance.

Just before we get into the tour, I am currently doing a $20 steam card giveaway on amino. All you need to do to enter is download the amino app, search my user “xrawyt” then follow me and comment on one of my stories that I’ve uploaded there. I’ve added a link to the description for you guys as well and I’ve explained what amino is within a recent community post as well.

I also have a discord channel which will be linked below for anyone wanting to join.

To start off with, these are all of the items inside of the base. We have 12 small boxes, 2 shelves, 14 large boxes, your tool cupboard, tier 2 workbench, 8 furnaces, 8 barbecues, 2 shotgun traps and a sleeping bag. All of the barbecues, small boxes and large boxes add up to a total storage of over 22 large boxes.

Heading over to the base here we have a sheet door to get inside, followed by your standard doorblock airlock. This is great to checking for door campers, it means that if you die with your doors open, no one can go deep.

We then have two metal shopfronts to give you better vision of what’s outside. These work really well with the doorblock airlock for seeing if door campers are outside and trying to fend them off.

Continuing through here, we have the bunker entrance to the base. Simply knock out the twig or wood half wall here to destroy the bunker. I’d recommend upgrading to wood just in case someone tries to shoot it out with incendiary bullets. We also have some shotgun traps here which will slow raiders down, one of which is a lot harder to shoot out.

Into here, we have two large boxes for dropping off loot quickly, a furnace, small box, and your tier 2 workbench. We then have 2 furnaces and another small box before reaching the first main loot room, which holds 5 large boxes, 1 barbecue and 1 small box. Swap this out for whatever suits you best.

In the center of the base here, we have a lowered foundation to allow the placement of 3 furnaces at no extra cost to the base. As well as your TC hidden behind reinforced window glass to increase the raid cost.

The next loot room here again contains 5 large boxes, 1 barbecue and 1 small box. and again here, swap this out for whatever suits you best. We then have a sleeping bag and a furnace before reaching your next loot room, which holds 4 large boxes, 6 barbecues and 8 small boxes. If a raider were to raid through this direction instead to avoid the bunker, it’s still a similar raid cost due to the placement of the TC. It’s still going to be an additional 3 garage doors and then the reinforced window glass instead of 4 garage doors and then the reinforced window glass.

The foot print of the base is simple. Starting with a square and a triangle for your starter base, before expanding out to add all of your loot rooms, then again for the bunker entrance and finally your honeycomb.

To break down the raid cost, this is the cost to raid directly to the TC. And this is the cost for all of the loot. This base is going to cost you 5k metal, 4k wood and 16.8k stone. With an upkeep cost of 1.5k metal, 4 wood, and 2.8k stone. A more detailed costing can be found in the comments to include deployables.

8 of the Most Useful RUST Keybinds