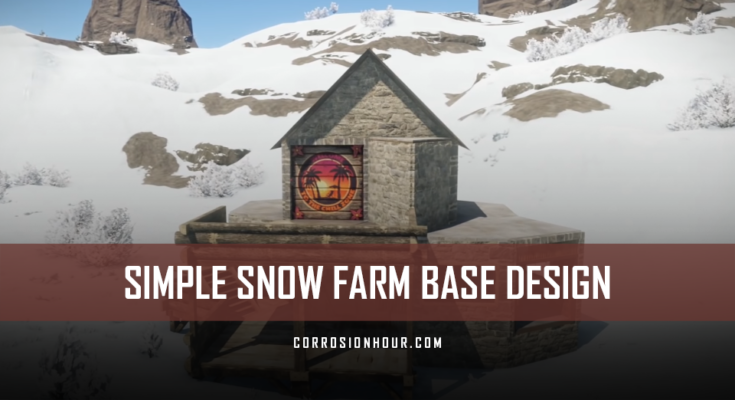 This RUST base design is brought to you by our partner, Vice.

In this video, Vice walks us through his tried-and-true farm base design solution for larger group and clan use. Duos and trios would still find great utility in this design as well.

Two great features of this base  design are:

But perhaps the most interesting feature of this base and that which helps keep it ‘safer’ is the intentional roleplay characteristics to throw raiders off the scent. The cloaked farm base more resembles a quaint, roleplay building and may appear less of a potential raid target upon brief inspection.

Vice recommends crafting items like doors and boxes once you have the starter up so that you save inventory space to bring up the items that can’t be crafted at a tier-one workbench, or, are needed right away to secure the base.

Be sure to browse Vice’s past videos and don’t forget to subscribe to his channel for alerts on his latest videos.

How’s it going, everybody? So, you’re probably seeing this base thinking, “Oh, finally, Vice makes a base that is practical for solo/duo players to build.” Well, I have bad news for you, my friends; this is still meant to be a base for clans, just an auxiliary snow-farming base for a large group.

It’s designed around two things: having a nice minicopter hanger at the top as well as being buildable from one inventory of materials. This means that you can fly over with all of the materials for the base, slap it down, and have the base up and going very quickly.

With that being said, it is still a two-by-two, so if you want to make this your solo-main base, sure, go ahead. It’s not the most defensive, only taking like fifteen rockets to raid, so I wouldn’t recommend it as a main base, but it does do a good job keeping your farm safe from people just looking to fire four rockets and getting a bunch of boxes.

I’ve also designed it to look role-playery as hell to discourage people from wanting to raid it. Mezzy and I have built this base pretty much exactly quite a few times when playing for clans, and it functions really well.

This here is all of the materials that you will need to build this base. This includes space for guns, meds, and ammo so you can defend yourself as well as your building plan and hammer. You only need to take over one door and then craft up some more doors while you are over there. You don’t need to take over a bunch of boxes because you can take over some metal and some wood.

You also need twelve gears for garage doors. You don’t need to take these over at the start, but it does help.

This will be a pretty simple base, so it will be a quick video. Let’s get into it.

To start, you’re going to slap down these extremely complicated foundations. This is a two by two, which means two squares on either side followed by two more squares forming four total squares. Place walls all around and upgrade everything to stone.

You can slap down a front door with a code lock on it and put your TC in this corner here. You can put down a sleeping bag right by the door and your level one workbench right by the TC. Then place down your first furnace to cook up metal ore. Queue up a bunch of boxes to craft, and let’s get to building the loot room.

This base doesn’t have the TC in the loot room; rather, it is in the other corner to make more space for boxes.

This base uses this twelve-box loot room layout, where two large boxes are in the back, followed by another large box in the front. This gives you three boxes per half floor, totaling twelve boxes.

Of course, in this current state, this base is just one door to the loot room. You don’t have to do all of this internal stuff right away; you can do it in whatever order you want. But, to make the base more protected, we’re going to need to add an entrance. This is going to be more complicated than just having two single doors leading out into the open, so just follow the steps as I do.

On this triangle here, we’re going to leave this open because this is going to form a jump up to the mini hangar. This will give us some extra mobility in the base if we need to come out from the top if someone is camping the front door. The double door at the front forms a single-door airlock.

You can place down some more garage doors, but this door here I would make a double door, just because if someone tries to go deep from the top, you don’t want them having access to your entire base. Again, of course, this can be fixed just by putting down some shotgun traps facing the entrance.

And this is what it should look like with the starter complete. At this point, you can relax, put on some Youtube and get to practicing your jackhammer spray. Once you hit a few more nodes, tho, you’ll want to come back to the base and work on your mini hangar. The mini that you flew over with is likely out in the open, so you’ll want to get it closed in as soon as possible.

Place a garage door leading out as well as window frames leading all around. You can use a combination of window glass and window embrasures here; this will keep it safe from splash damage from people trying to rocket in while still giving you the ability to pick them up and shoot at people outside your base.

On top of the base, we’re going to seal it up with traditional roofs to make it look more role-playery.

At this point, you should probably have some metal that is finished cooking, so get to upgrading the rest of the base. The whole core pretty much needs to be upgraded completely to metal. The only thing that you don’t need to upgrade are the stone wall frames holding up the garage doors.

This one wall on the back might be covered by honeycomb; you might need to pick up a box to get access to it. The wall in between the loot rooms needs to be upgraded to prevent people from picking in.

Of course, leaving it looking like this looks like a juicy raid with the metal walls peaking out; I would eight-rocket this in a hurry. So, place down some extra stone honeycomb to make it twelve. And here’s a building tech tip, you guys are wasting 300 stone putting this wall in when you are doing your honeycombing. This wall doesn’t need to be here; you only need one wall separating the two walls so that you can’t splash both of them.

If you’re trash at flying minicopters like me, you might want to build a mini landing pad. This doesn’t need to be upgraded to stone so just leave it wood. I’m going to go a little more all out with mine and make it look really role-playery.

Here’s a pro-tip, if you build this base on the river, you can actually use the top area for some farming space. This won’t be a great farm base, and if you’re in a clan, you should probably have a dedicated farm base anyway. But, if you are just looking to grow a little bit of hemp, it’s perfect. You will, of course, need heaters so that your plants grow instead of dying.

And one final tip, I usually place a locker in the first door airlock. This probably isn’t the best place to store your kits, but I just use it to store grub kits and a jackhammer anyway, so it’s probably fine.

Anyway, this is a pretty simple base, and I don’t have anything more for the video, so goodbye.