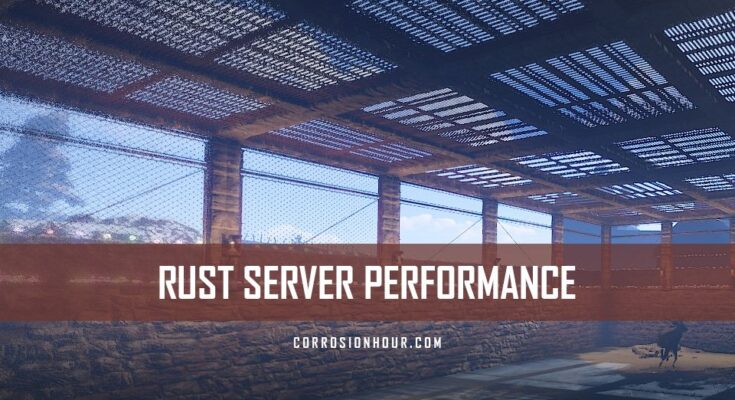 This RUST Server Performance guide was provided by antisoma and LeDieu of EU BEST with special thanks to Alistair of Facepunch Studios and wulf from OxideMod and tyran from Rustoria. It is primarily for RUST server owners offering large public servers with high player slots (100+) where performance becomes increasingly important.

As a server owner – you have a few main tasks:

We will focus here on the final task – server performance.

The vast majority of large and busy RUST servers are running on dedicated servers in data centers. This isn’t because it is impossible to get good performance on shared hosting, but because it’s often unclear exactly what resources are available to your RUST server.

If possible, you want fast dedicated cores for your RUST server. RustDedicated.exe (the server executable) is largely bound to one or two cores – so we want cores to be as fast as possible.

Facepunch has stated that “hard drive speed matters” for both server loading times and performance generally. So choose a server with an SSD if you can.

It’s pretty obvious that greater numbers of players require better server hardware and are more likely it is to expose game engine limitations.

Lots of players building (especially on large bases) and destroying bases requires the server to do a lot of work and it hurts RustDedicated.exe performance.

The more things (entities 1) that exist in the world the greater the impact on the server.

Players create entities by building bases. And some exist already in the world (trees for example) which increase with map size and some variability depending on the map seed.

1  An entity is basically a Facepunch Studios concept and is a networked game object that exists in the RUST world.  They include walls, doors, furnaces, ores, trees, animals, code locks, sleeping bags, and tools. Basically all the things you use or place in RUST.  Each entity can have one or more colliders (so that collision detection exists). There is no hard limit for entities in the game. There is a “collider limit” because of a unity/physx bug.  That’s why RUST now batches colliders so that the collider limit isn’t reached.

2 Most players have no idea that lag will normally be network/connection related –  and usually on their end. However, when it’s consistent for all players you know that either it’s a wider (server/datacentre) network issue – or a performance problem

This guide isn’t about the connection between the player and the server. This can be poor for a variety of reasons resulting in high latency, packet loss, and dropped connections. It is very common for players to have networking problems and server hosts/data centers will also be responsible for this on occasion. Contact your server provider if many/all of your players are affected by high ping or packet loss.

DDOS (Distributed Denial of Service) is a very real concern for server owners. Find a server provider that can meet your needs – they do exist and they are not extortionately expensive.

Running oxide doesn’t impact server performance. But you wouldn’t be running oxide unless you also wanted to run extensions or plugins and they do have an impact on performance.

Some plugins might improve performance over time, consider one that increases building decay and helps limit the number of entities in the world. Every plugin has some impact on server performance when it is active. But for most plugins the impact will be vanishingly small.

How do you assess RUST server performance?

When a server is not performing well actions like opening boxes and doors will take longer than expected, PVP will start to feel inconsistent, placing building parts will not be smooth, adding chat is delayed, players shout “lag 2” in chat. Once you’ve ruled out network issues – it’s necessary to investigate further.

Server FPS is the most obvious and easy way to check server performance. And because of this many server owners place too much emphasis on server FPS. Facepunch Studios has stated multiple times that a server FPS could be limited to 30 and players would not know the difference.

Setting excessively high server FPS will increase CPU usage with no actual performance gain. So that’s important to consider if you are running multiple RUST servers on one dedicated box.

However, we do want servers with consistent FPS that doesn’t drop close or below 30 FPS. If the server is dropping below 30 FPS (or the FPS is very inconsistent) then you will need to make changes to improve performance.

Server FPS is displayed in the bottom right of the server console window. Or if you don’t have access to the console you can type “fps” in remote server console and it will return the value.

Whether running your server on Windows or Linux you should be using standard tools to monitor CPU, memory, hard drive and network usage.

Let’s describe an ideal situation. You are running a single RUST server on a dedicated box. Using tools like Windows Task Manager and Resource Monitor you determine the following:

If you check and your server performance is not as described above – then RustDedicated.exe performance may be impacted.

Time warnings are not reported in the console by default. You may wish to turn them on (global.timewarning 1) for periods of time to assess performance. The most critical information that this will provide is how long garbage collects are taking.

Keep in mind that garbage collects also collect oxide extension and plugin garbage – and so running plugins will (to some extent) increase the length of the collects.

How do we Improve RUST Server Performance?

Both affinity (/AFFINITY FE) and priority (/HIGH) can be set in the batch 4 used to run RustDedicated.exe, here is an example:

5 decay.scale controls the cooldown before decay starts and the time it take for decay to destroy a foundation.  decay.scale 1 is default and setting it to 2 would effectively double the rate of decay. (This has now been replaced with the upkeep system, but if the upkeep system is disabled it will fallback to the old decay system and this will then apply.)

6 On a test server, a single player building as quickly as they can on a large base can drop FPS from 256 (set as max) to below 80 FPS.  This is repeatable and considerably worse on busy servers where it can reduce FPS below 30.