RUST players will be able to view the server’s header image when single-clicking on a server in the in-game server browser. RUST server owners should take advantage of this space, as it can be used to help bolster your server’s branding, advertise additional aspects of the server, and add intrigue.

One important thing to note, the RUST server header image is the second thing players will visually see about a server. It sits at the top of the server description dialog. The server header image is very important, as it helps build the mental image of what players may expect when joining the server. Server owners that take the extra time and effort to customize this setting will likely be taken more seriously than a server that doesn’t.

In addition, numerous 3rd party server listing sites, such as RUST Monitor, may display this image on their RUST server directories. Remember, a picture is worth a thousand words.

Focus on permanent aspects of a server

As we discussed in previous posts, RUST players will make snap decisions when it comes to server selection. Whatever server image is used, make sure it reinforces the server’s name and server description. Don’t add anything that would contradict them, for instance, if the server is advertised as vanilla, the image shouldn’t reference clearly modded aspects.

Be sure to utilize the header image and make it enticing for potential players to click on, explore, and maybe answer some questions. Keep in mind that this image may also appear across the web on server listing websites and other applications.

Information to consider including in the RUST server header image:

Who can enter the RUST server header image command and variable

How to use the RUST server header name command and variable

There are two primary methods for setting, editing or removing the RUST server header image. Each method has it’s own pros and cons.

Method 1: Issue as a console command

Use the command below to set, edit or update the server header image (example text provided between the quotes):

On the RUST server description dialog, it will display as (example): 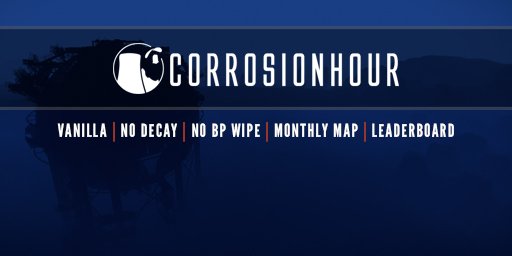 Use the command below to remove the server header image:

On the server browser screen, it will display as:

*Note that after removing a server header image, it may take some time for the cache to clear and remove the image from the server description dialog.