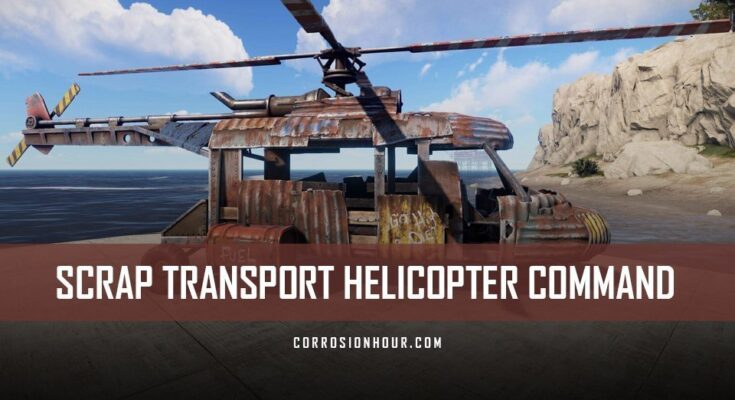 The primary feature of the Scrap Transport Helicopter is its ability to move multiple players through the air in its open cargo bay. Similar to the hot air balloon, the rear cargo bay doesn’t require players to be mounted to fly inside of it.

The Scrap Transport Helicopters can be found randomly around the the map, similar to the hot air balloons. This is controlled by a server variable that allows server admins to increase, reduce, or remove the spawn population.

Much like the minicopter, the RUST Scrap Transport Helicopter is pieced together primarily out of sheet metal scraps and two-by-fours. The cockpit seats for both the pilot and co-pilot appear to be made out of steel and are each welded to the floor by a central pillar.

On the sides of the aircraft are two identical red fuel tanks, each with the word “Fuel” scribbled across them in white paint and with a black rubber hose leading out of the back, which runs up along the side of the aircraft to the engine above.

Below you can view an interactive 3D model by the artist Thomas Butters, a 3D designer at Facepunch Studios.

Screenshots of the Scrap Transport Helicopter

There are two seats located in the cockpit, which require the players to be mounted to the aircraft. The left chair is designated as the primary pilot seat while the second seat is for the co-pilot. Currently, the second seat does not allow for any control of the aircraft; however, the co-pilot can wield and use inventory items while in flight.

In the cargo bay, up to twelve players can comfortably fit, while more than 20 players can creatively cram themselves in. Also, important to note, players in the cargo bay cannot mount the pilot or co-pilot seats; this requires being outside the aircraft. Damage done to Scrap Transport Helicopters can be repaired using a wooden hammer and metal fragments. Each hit with the hammer will heal 50 damage and consume 38 metal fragments. This will lower as less damage is available to repair.

The Scrap Transport Helicopter’s controls are nearly identical to the existing minicopter aircraft.

To control the Scrap Transport Helicopter:

Inside the cockpit, pilots have four functional flight instruments to help operate the Scrap Transport Helicopter.

Who can enter the RUST Scrap Transport Helicopter command

Use the command below to spawn a single Scrap Transport Helicopter: