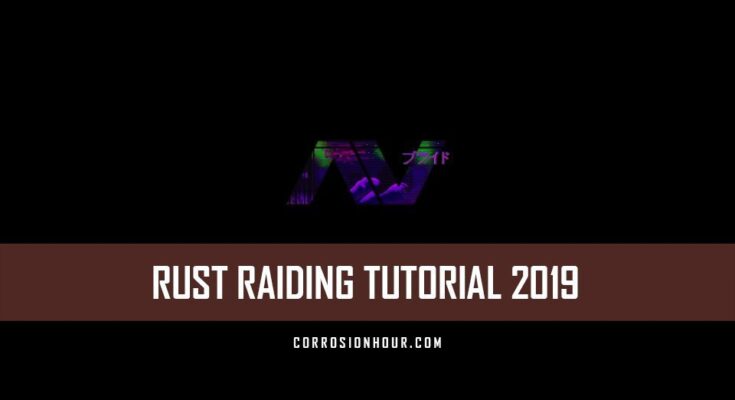 This video, a follow up to Beginners Guide Tutorial, is provided by our partner Cruxal.

Raiding in RUST can be daunting for new players. Many new players spend their first few weeks hoarding supplies, building insecure bases and trying to form relationships with neighbors. These players walk on eggshells because they’re highly intimidated and still learning the ropes. RUST has plenty of knowledge to be unpacked and Cruxal is here to help cut out the fat out.  His no BS guide provides new players with the core knowledge necessary to effectively begin raiding in RUST.

One of the best ways to learn how to secure a RUST base design is to spend time raiding other player’s bases. Nothing beats the raw experience. Over time new players will learn how to spot a weak spot in a base design and learn how to take advantage of them. In turn, this knowledge will help them learn to focus their own base design’s weak spots. In addition, they’ll learn quickly the differences between passive and active raid defenses.

Be sure to browse Cruxal’s past RUST videos and don’t forget to subscribe to his channel to be notified on his next video.

Hey guys. It’s Cruxal. Before the video starts, I just want to inform you that you may skip to different parts of the video that interest you using the timestamps in the description.

So you think you got the basics of Rust down to a science? You’re wondering what your skill level is from 0 to hJune but you haven’t gone raiding yet? Welcome to the only raiding tutorial you’ll ever need.

There are many different methods to raiding, the first is to figure out which one you will be using.

You can raid with satchels, explosive ammo, rockets and or C4.

The cheapest route to raiding is with satchels, it is the only way of raiding without having a tier 3 workbench, I highly recommend getting to tier 3, and skipping satchels to save that precious scrap and learn better raiding blueprints. Satchels make a lot of noise, are unreliable, and are mating calls letting people know you are using satchels and probably under geared.

The only time I can recommend using satchels is if you get access to them incredibly early and want to evict some neighbors before they build up too much. As soon as a couple hours pass into a wipe, it’s most likely already not worth learning them anymore.

NOTE that this is personal preference, if you’re a slightly larger group you may be comfortable with Satchel raiding, and may welcome the additional challenge of having players culminate to your area.

To raid with satchels, you’ll need:

Next we have explosive ammo. Most of the time explosive ammo is the cheapest route, not only that but using a silencer along with either your semi-automatic rifle or Assault Rifle, will make your raid completely silent, making this a great choice for solo raiding.

Explosive ammo is great for splash damage, when using it make sure you get the most out of it by splashing multiple walls or doors. You’ll still need to reload your gun, so be very careful when raiding solo not to get jumped on while reloading. If there’s multiple players firing explosive ammo, don’t start firing all in sync to find yourselves all reloading at the same time.

Now let’s talk about C4, You don’t see C4 as often simply because it’s cost to damage ratio in terms of gunpowder or sulfur is most the time higher than other methods and doesn’t splash. A good example of this is a Metal Wall. Destroying one using C4 would cost 8,800 sulfur in total, where as explosive ammo is about 10,000 and rockets 11,200. The C4 would damage only one wall where as the other two could splash multiples, therefor getting a much better cost to damage ratio on Rockets or Explosive ammo.

To raid with C4 you’ll need:

Rockets are considered meta for most players, It’s fast, and will completely melt anything in its’ path, players included. Bigger groups and advanced players will farm and stack up dozens of them and will mow down the bases of their opponents within mere minutes. Not only are rockets amazingly powerful, they are an absolute blast to use. There aren’t many downsides to them, but here are a few;

You have to be careful when running around! If someone runs in front of you while a rocket goes off, it will explode on the intruding player and will kill anyone in the vicinity. This can quickly lead your raid to fail and gives the opposing players a much more solid chance at defending.

Reloading takes a few seconds, so if you’re solo or duo you have to be extremely careful. Experienced players know this and they may push you as soon you fire your Rocket.

This is one is obvious but should still be mentioned: Cost. You need at least one Rocket launcher which are 100 High Quality Metal and 10 Pipes each. Crafting ONE isn’t too bad, but if something happens and you lose it, that’ll put a halt to your raid and give raiders the chance to defend and repair completely, it’s a good idea to bring extras or at least have a backup if you lose it.

To raid with Rockets you’ll need:

Note that you’re certainly not locked in to using one raiding material, You’re welcomed to use a combination of all of them if your blueprints allow it, and I encourage doing so to get the cheapest or fastest combinations to raid a base. Here’s a quick example: a sheet metal door can be destroyed using 2 rockets, for 2800 sulfur, a C4 for 2200, 4 satchels for 1920 sulfur, or 64 explosive ammo for 1600 sulfur. So ideally explosive ammo would be the way to go, but as I’ve explained, it can be slow.

SO! If I use a single rocket, and a another player shoots 8 explosive rounds at the same time, you get a much faster result with the same amount of sulfur used as the explosive ammo option, which is 1600 sulfur.

There’s a lot of different combinations and this video could go on for hours so I HIGHLY encourage players to visit rustlabs.com, it has all the information you can think of when It comes to damage and cost of different items.

Where to find your raiding materials:

You can find all you need for raiding from different crates in the game, anywhere from a toolbox to elite and timed crates. The best way of knowing exactly what drops from what and the what drop rates are, head to rustlabs.com

OK, maybe you’re ready to raid and your trigger finger is hella itchy, so before you head out, here are a few tips you don’t want to skip over.

Don’t chew on something that’s too big for you, try raiding something smaller for your first couple raids. If you think you might not have enough, then you most likely don’t. Always make more than you need. When raiding it’s always better to have more than not enough.

Make a raid base, there’s nothing worse than going out with a ton of rockets and C4 and just losing everything instantly to another player. Seriously make a raid base. If you’re solo make it 1×2. If you’re a group make it a 3 story 2×2 with windows to roof unwanted company. Make sure you put metal embrasures so you don’t give anyone easy access to your raid base. And don’t be an idiot by putting loot in boxes next to your window. Players can and WILL loot them.

Bring extra gear sets, foods medical syringes, etc. If you die and can’t get back to your body, re-spawn in the raid base, re-gear and head back out as fast as you can. If you’re unsure if your body is accessible or your loot has been taken, it’s wise to take some gear with you anyway. If someone is still looting your body you’ll be able to shoot the player and recover what belongs to you.

Comms are so important when it comes to raiding. The first couple times it may get hectic, so get ready for it. Designate a raid leader if you need to, and have that person make call outs.

It’s easy to lose your shit during a raid, so try to keep your cool and keep your heart rate the lowest it can be by actually reminding yourself to stay calm and breathe. You always play better you ain’t shaking and whiffing all your shots. I myself constantly involuntarily hold my breath during intense moments and I have to remind myself to chill out. No one is perfect, find your flaws, and fix them. This will make you a better player.

If someone starts yelling at another teammate, try disarming the situation and clearing comms. Talk about how things could have been better after the raid without necessarily pointing fingers. If you’re the player being yelled at, make sure it’s known that they made the situation uncomfortable and hopefully your teammate apologizes. If you made mistakes during the raid and someone points it out, don’t be salty, learn from your mistake, and bring the experience to the next raid.