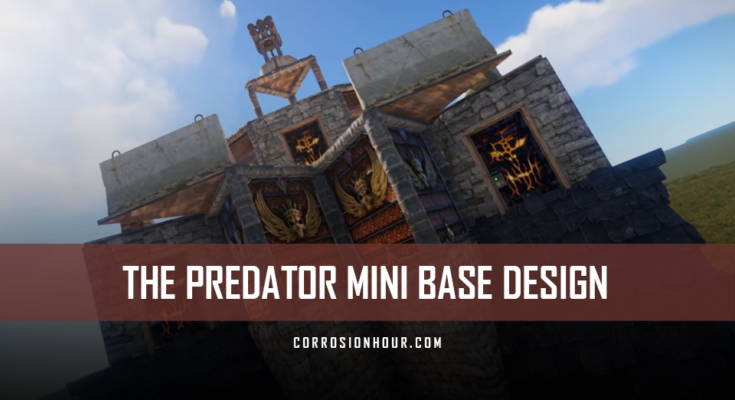 The Predator Mini Trio Base Design

The Predator Mini Trio RUST base design video is provided by our partner Willjum.

This base was intended and designed for vanilla-based servers and supports a small group of up to three players. This base utilizes a double bunker design with un-lootable loot rooms while maintaining a relatively high raid cost for the full loot.

The Predator Mini, with its numerous advanced building techniques, will infuriate anyone attempting to raid it. There is copious storage for a base with such a modestly small footprint.

This RUST base design will cost approximately 23 rockets to raid directly to the tool cupboard and well over the initial 23 rockets to access the entirety of loot spread throughout the base.

Few things I need to say before I get into the build. Firstly, I do not cover the auto turret wiring for this video. I do it for a reason.

While I know my way around electricity, I am no expert, and I would strongly advise you to check out Papapercocet’s video in the description. He lays out the best circuits in a very clear and logical way, so if you’re unsure about your wiring, pay Papa a visit and you can say hi from me.

Secondly, this base is a mini variant of a larger, stronger base I’ll be releasing in the coming weeks. Due to its much-decreased size, there are a number of places where it is more vulnerable to splash and rockets.

I won’t be going over these weaknesses in the video, as I know many of you will be building this base and I don’t want to make a raider’s life any easier. But don’t worry, the calculated rate cost takes into account these vulnerable areas, so it is still a very expensive raid for a low build cost.

Lastly, being a small creator, it is hard getting my video out there into recommended. So if you do enjoy the build, you’d be doing me a massive solid by subscribing. If you could share it with the people you think would enjoy it too, that’d be great. That’s enough monologuing for me.

Now onto my intro.

Today’s base is a ruthlessly efficient double bunker design with four real un-lootable loot rooms, and a minimum of 23 rockets to TC. This base is sure to infuriate anyone who tries to raid it.

To begin our tour, we’ll be starting off inside the bunker. Hatchet inside the dropbox so you can knock out the wooden wall. Once the wooden wall is knocked out, the bunker will be open. As we come into our main loot, we have four real un-lootable loot rooms.

The best way to make these more secure is to upgrade the frame and the triangle you’re standing on to armored. The best part about these un-lootable loot rooms is that the only way to soft side them is one at a time with spears.

Once we come to the rest of our base, we are greeted with lots of garage doors and extra boxes and furnaces. Nice little shooting floor as well as access to our auto-turrets. This is pretty much mirrored on the other side but with a larger loot room.

Our front door is protected by a shotgun trap, and we also have window bars to check and see if anyone is outside. Coming up to the top floor, we have a couple of extra boxes as well as two beds on either side.

The double doors open and act as an airlock for the top floor. You also have a shotgun trap to stop anyone going deep. And this is the build cost. Very respectable for a strong defensive base.

And now we move onto the build. You’re gonna need to follow the exact steps I take in the same order. If you do it in the wrong order, you won’t be able to place the foundation steps later.

This base doesn’t come with a starter, and that’s because the bunker can be quite awkward to build. It’s a good idea to have a 2×1 already with lots of metal to cook up so you can upgrade all of these straight to sheet metal.

Once you’ve done all this, you can now place your foundation steps. Upgrade that straight to armored. At a lower height, three triangles. This will be where your tool cupboard and sleeping bag are placed.

Place two half walls, upgrade the top one to armored, and remove the bottom one. Do the same thing on the other side. Place your tool cupboard in this triangle, and place it as far to the left as possible so you can still fit two drop boxes in.

Placement of the drop boxes is easier from the outside. A sleeping bag can be squeezed in the triangle. You should be able to fit one dropbox. Now go ahead and seal off the bunker. To demonstrate, this is how you’d seal it off before going offline.

And now you can go ahead and place four square foundations on either side of the base. These square foundations are where we’re gonna build our un-lootable loot rooms. It’s a good idea to leave the sidewall open because this will make placing boxes much easier.

Make sure you code lock each box. Place a sheet metal single door frame facing outwards. Two boxes, two code locks, a frame, and then a door. On this triangle, you can go ahead and place your last two boxes. The only real un-lootable boxes are the bottom two, but these top two are still awkward to raid.

Repeat this in all four loot rooms.

Once we’ve done that, we can start adding a chute. It’s a good idea to make this chute sheet metal. You want the whole core to be sheet metal, so even if they get to the inside of the base it will still be a minimum of 8 rockets to get into the main core.

Fill up the ceiling. You can add three furnaces on the bottom of the foundation steps, and then a ladder. I’ll show you a demonstration of the bunker. All you have to do is place a roof, and upgrade it to sheet metal.

Now it’s a good idea to start adding a honeycomb. You can upgrade this to metal for even more protection, but I’m just gonna leave it as stone. I’m skipping over the honeycomb quite quickly. All it is is triangles on the outside of every single block.

The only honeycomb that I upgrade to sheet metal is the honeycomb outside of the bunker. This is to increase the minimum cost of the tool cupboard. That’s the honeycomb done, and we can start working on the second floor.

With the shooting floor, upgrade the window frames to sheet metal. This prevents people from picking it as easily. Half walls above the armored will just increase the rate cost of the tool cupboard, which means no one can blow directly down into the tool cupboard. I

t’s a good idea to upgrade most of this floor to sheet metal. We will be keeping some loot up here, but not your best stuff. Due to the small size of the bunker below, you will be spending most of your time on this floor.

For that reason, I’m going to be using lots of garage doors, as once they’re opened they make a lot of space. In these little triangles, you can have whatever you want. I’ve gone with one loot room and one furnace room. Place window bars and braces and place your garage doors.

Now for the top floor. Fill up the roof. You can start filling up your rooms. I like to put a workbench three, a locker, and two large boxes.

In the second loot room, I use my normal bar. I won’t be putting the barbecues in this because I don’t want to drag out the video too long, but you can place barbecues if you’d like.

As I said before, one of my triangles I’m using as a furnace room. The other one, I’m using for boxes. Going back to your roof, put three window frames and a wall frame on either side and a single wall frame in the middle.

You should probably upgrade it to stone rather than metal, as it will only be four rockets through anyway. Adding shopfronts so you can see onto your roof, and a door, and then two double doors.

I use the double doors facing outwards so they block the single door when opened, this acts as an extra airlock. If you’re only playing with two people you can just have two beds and the other room for some drop boxes, but I’m just going to put four beds in.

Fill up the roof. Lastly, you can fit a couple of boxes above the triangle. You can add shotgun traps to the doorways.

And then this part is optional, but if you want to place auto-turrets add two triangle honeycombs and upgrade the two triangles to sheet metal. Place two frames, place your garage doors on them, and finally place your auto-turrets.

As I said in the intro, I will not be showing the wiring for the auto-turrets. If you want the best wiring, check out Papapercocet’s video. Add square foundations with roofs to access your doors.

And for the finishing touches, you can add some barricades. You can even add an extra triangle.

This gives you a peep down to your front door, which means you can shoot door campers. Lastly, since it looks fucking cool, add a sandstone onto the roof. You can also put a windmill up here for functionality, but a sandstone looks cooler.

And that’s the build guys. If you enjoyed it please subscribe and leave a like, I’d really appreciate it.

I’ll see you in the next one. Willjum out. 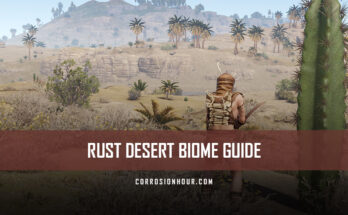